The elephant named Pretty Boy went up to a car and sought assistance from vets on board. 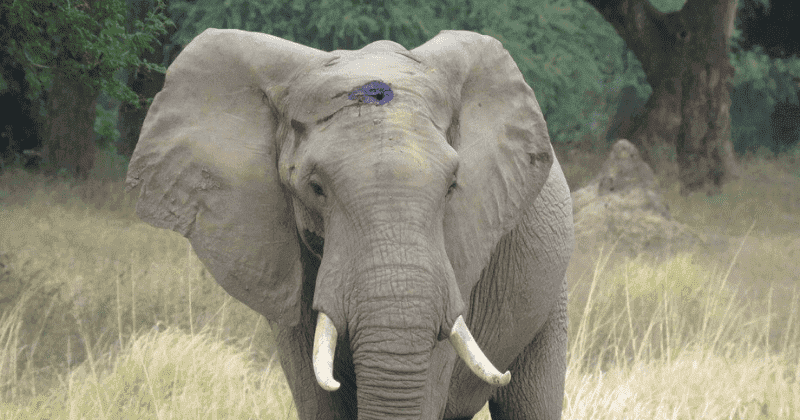 An elephant in Zimbabwe was shot in the head by suspected poachers and was believed to be walking around with the wound between three and six weeks. The elephant was nicknamed Pretty boy was said to be around 25 years old. Fortunately, the gentle giant was discovered by veterinarians from Aware Trust Zimbabwe in Mana Pools National Park. Dr. Lisa Marabini said that Pretty Boy approached the veterinarians and showed no signs of aggression, reports BBC. "It's like he knew we were there with the intention of helping him." The team sedated him, took an X-ray, and cleaned the wound, but decided it was safer to leave the bullet behind, Dr. Marabini said.

Elephants in Mana Pools National Park have long been the targets of poachers who kill the majestic animals for their ivory. Hunting areas exist near the park. What's heartbreaking to know is that the elephant had not just one but multiple injuries. "We think he was shot outside of the park and came into the park for refuge," she said, explaining that if the bullet had hit a few centimeters lower, it would have gone into his brain. Pretty Boy also had a shoulder injury. An old scar near his spine also suggests that he may have been shot at before in the past. "We suspect he was shot in the head first and turned to flee and the poacher put a bullet in his side."

In a Facebook post from 2016, the group shared the details of the gentle giant's story, writing: "Hurry up and wait" is a common saying in wildlife circles as it usually takes more time to find the animal than it does to treat it. Not so on 13 June - when "Pretty Boy" heard they'd arrived in Mana Pools he made himself available for examination within half an hour, coming right up to their car. An extremely gentle and relaxed bull, the vets managed to get a good look at what immediately became apparent was a hole going into his forehead.

The elephant was tranquilized and then taken in for an X-ray, which showed a deformed bullet present inside his head. The group continued: An Xray was taken of Pretty Boy's skull which - in the vets' opinion - confirms the presence of a deformed bullet. He was likely shot at several centimeters too high for a "kill shot", and the bullet glanced off his skull causing a depression fracture of the bones in his sinuses. The bullet is lodged under his skin some 5cm away from the wound, but because of the difficulty of taking several Xray angles on a skull that big, it could not be sufficiently triangulated to definitively locate it.

"Bullets are usually sterile when they penetrate tissue as they generate so much heat, so if they don't hit a vital structure they can often be left," Dr. Marabini, director of AWARE, told The Dodo. The bullet glanced off his skull and caused a fracture in the bones of his sinuses. Furthermore, his head wound was infected. "It was essential to remove the dead pieces of bone so that the body could continue to heal the infection," She couldn't help but notice how gentle he was despite how many times humans have hurt him. "I never usually feel totally comfortable getting very close to a wild elephant," she said. "But he literally emanated serenity. There were no aggressive vibes coming from him whatsoever." The sweet elephant was recovering and doing much better the next day. AWARE shared a picture of the elephant and wrote: Pretty Boy the day after treatment looking much happier and eating well. We were relieved to find he was also very relaxed around us.

Just last week we reported, a pregnant elephant in India died while standing in a river trying to soothe injuries on her mouth caused by the food she ate laden with crackers. Keeping pineapples with crackers is a common practice in these parts of the country as a measure to drive away wild boars that damage the crops. Despite the horrifying pain she must have been in, she too did not cause any damage nor attack any humans in retaliation. However, tragically, unlike Pretty Boy, she could not be saved. Sometimes (or is it most times?), animals seem far more human than us, don't you think?

More info on the poor pregnant elephant. Even in pain as she ran for the river seeking relief, she didn’t hurt anyone one or damage any property. Forest officials gave her a heart felt & respectful cremation. No mention of the perpetrator. 💔https://t.co/nmcB5khNZp