A wildlife enthusiast in Bolton, Britain who had been monitoring the swan said she was also harassed by a dogs, a duck and a moorhen. 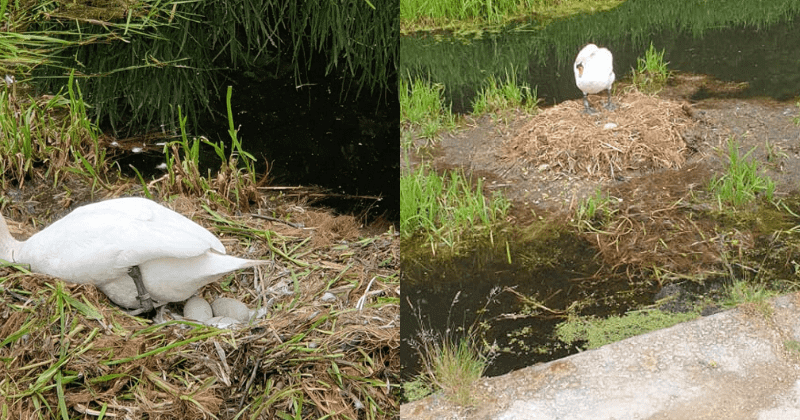 A swan who laid six eggs at a Manchester park died of a "broken heart" after vandals destroyed most of her eggs before they hatched and her mate ran away. News about the tragic story came to light when a wildlife enthusiast who had been monitoring the swan wrote about it on a Facebook group, much to the anger of other members and the public at large. The man, named Michael James Mason, wrote on the group on June 18 and began: I really don't want to do this post today because it comes with great sadness. Mason, it seems had been sharing updates on the health and the situation of the mother swan and her family regularly with the other members and wrote: I have tried to keep you updated on this Swan who laid six eggs.

But life was very hard for the swan since she not only had to deal with vandals but other concerns as well. Mason wrote that three of the six eggs were "destroyed" by youths and she was also "harassed by dogs jumping in." Not only that, a duck and a moorhen also regularly made her life miserable. The result was the loss of two more eggs. She was finally left with only one egg. Added to this, she also had to deal with her mate leaving her on her own. Mason was informed that she was found "slumped in her nest dead." Mason added: Just feel like crying as I have followed her progress for about 12 weeks. According to the Manchester Evening News, the Royal Society for the Prevention of Cruelty to Animals is carrying out an investigation into the incident that led to the death of the swan. “This is a really sad development and it is very upsetting to hear about the death of this poor swan," it said.

It added, “We are investigating the previous distressing incident and we would urge anyone with information to contact our appeals line on 0300 123 8018. Swans, their nests and their eggs are protected under the Wildlife and Countryside Act 1981." Many wildlife activists and people have condemned the incident. According to a report in the Daily Mail, the youths referred to in the post were a group of teens who threw bricks at the nest of the swan, located at the Manchester Canal in Kearsley. The report also stated that witnesses saw the teens aiming for the place where the nest had been made leaving the three eggs smashed. Sam Woodrow, a wildlife activist said, "There's not much I can say really. She probably died of a broken heart as she had a partner for life and he was driven away by stress."

The Swan Lifeline, a rescue center for swans, stated it had cases where swans died of a broken heart if they lost their partners since swans mate for life. This incident comes on the heels of another one that was reported a few weeks ago. On June 8, an elderly jogger kicked a young cygnet in Richmond Park in south-west London. The Metropolitan police have even started a hunt for the man for his actions are believed to have left the tiny bird with considerable brain damage. The bird was taken to a sanctuary in Shepperton, Surrey but died two days later. The police are still on the lookout for the perpetrator, described as a white male about 60 years old, 5'6", and balding. At the time of the incident, he was wearing black running shorts, a vest, and a running top with a logo on it. According to Metro UK, he was also seen kicking another cygnet but thankfully it escaped.

Police hunt jogger who kicked cygnet out of his way in Richmond Park https://t.co/s4RFVCAQEQ

Royal Parks Police stated, "Sadly the cygnet died this afternoon, his injuries were too severe. The suspect was seen to kick another cygnet, which thankfully managed to escape to the water."