The pair tied the knot in 1977 and are still madly in love with each other. 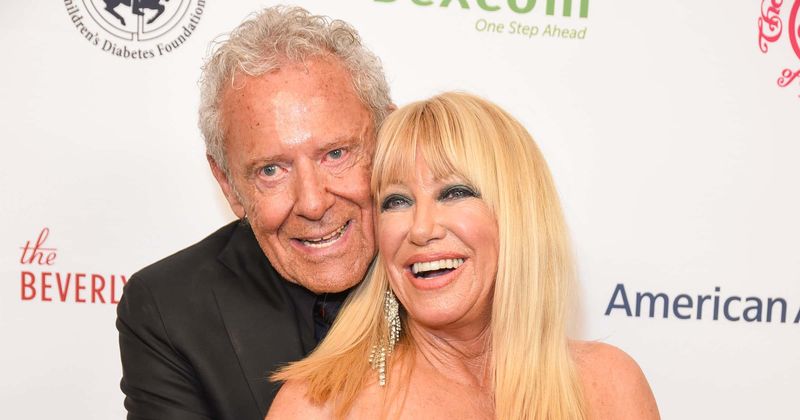 Suzanne Somers maybe be best known for her iconic role as Chrissy Snow on ABC’s Emmy-winning comedy series Three’s Company but her longtime relationship with husband Alan Hamel deserves just as much attention. The pair tied the knot back in 1977 and seem so in love after all these years; they really are #couplegoals. Considering the fact that Somers and Hamel have quite an exciting life in the bedroom too. After 44 years of marriage, how do they still have a sizzling spark?

The 74-year-old admitted that she had sex with her 84-year-old husband at least three times in one day. And all that before noon! Speaking on the podcast Heather Dubrow's World, she said, "At this stage of life, most people think that's over the hill. What time is it, noon? I had sex with him three times so far today." In fact hubby Hamel is usually ready first thing in the morning, "What is this thing about 4:30 in the morning that's suddenly like, 'Oh there he is.' I'm like, 'Could you just wait 'til the sun comes up?' God, our relationship has always been amazing," Somers gushed. "But now that our kids are raised and it's just me and Al, and we paid for the tuition, we paid for the weddings and helped them get their start — now it's just us. Man, are we having fun."

Back in 2019, the actress revealed to Daily Mail that the pair had sex twice a day, thanks to their weekly shots of PT-141, a melanocortin-based peptide that generates sexual arousal. In the past year, there's clearly been an improvement. In the candid interview, Somers shared, "I'm kind of in that groove, like when you were younger and you're in the mood all the time, and so is he because he's on hormone replacements," she told DailyMail. Speaking of the shots of PT-141 she called it a "sexual stimulant that works on your brain." She added, "I thought, "Wow, what a great thing." Because men have Viagra, but this is actually a shot for both men and women that's not a drug. It just stimulates that part of your brain that says, "Hey, I'm kind of in the mood." And, so, isn't that a wonderful thing? And it's not a drug, so I love it.'" Of her special man, she gushed at the time, "Oh, he's just so beautiful. I had sex with him on our very first date just in case there wasn't a second one. I just wanted to be with him that first time."

And it looks like their love (and sex life) has only grown! The Step by Step actress and Canadian TV host recently celebrated their 44th anniversary in November 2020.
In an Instagram video tribute, Somers captioned the post: Happy Anniversary Al! My darling, @therealalanhamel - how I love being your wife. Married today 44 years and together 53 years! I don't want to spend a day without you. What a life! Happy Anniversary!

i am definitely not living my best life. https://t.co/NXWkyaTbbr

"I've never enjoyed anybody in my whole life the way I enjoy Al," she told PEOPLE of their marriage back in March 2020. "There is juice and zest in this chapter!" Somers continued, "We worked hard to get to this place where we're comfortable. And we are so content together. We dance together, and we have a cocktail together at night. It's romantic and sexy. And it's not old people romantic. It's cool!" She also added, “We don’t fight and we don’t have moody days. I wake up in the morning with a spring in my step. We’re nude in our bedroom a lot,” she says. “My body is not perfect but Alan tells me it is. He sees what he loves, and that makes me feel good.”