Justice Ginsburg was appointed to the Supreme Court in 1993 by then-President Bill Clinton and she served as an SC Justice until her death. 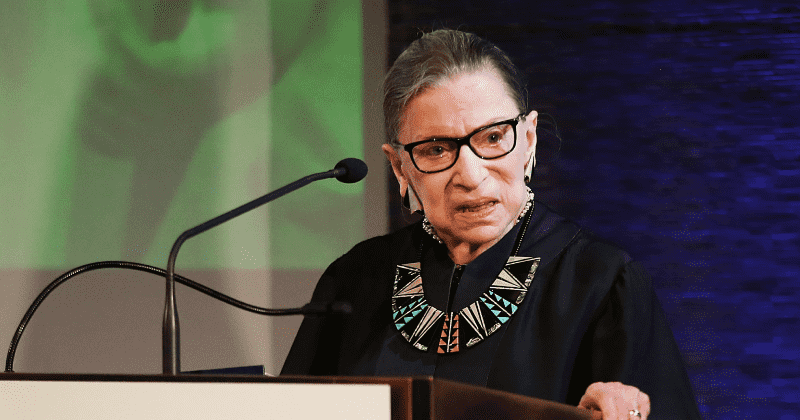 Justice Ruth Bader Ginsburg, a feminist icon who at 87 still remained on the more progressive voices in the US Supreme Court justice, has passed away at the age of 87. Justice Ginsburg died due to complications of metastatic pancreas cancer, the court announced. Ginsburg, who was appointed to the Supreme Court in 1993 by then-President Bill Clinton, is known for her progressive stance and voting favorably on key issues such as abortion rights, same-sex marriage, voting rights, immigration, health care, and affirmative action, reports CNN. Justice Ginsburg's death comes at a time conservative groups and the Republican party, including President Trump, are actively working to roll back some of the progress achieved over the years.

Justice Ruth Bader Ginsburg died surrounded by her family at her home in Washington, DC. A private interment service will be held at Arlington National Cemetery. "Our Nation has lost a jurist of historic stature," said Chief Justice John Roberts. "We at the Supreme Court have lost a cherished colleague. Today we mourn, but with confidence, that future generations will remember Ruth Bader Ginsburg as we knew her—a tireless and resolute champion of justice."

Prior to her stint in the Supreme Court, Ginsburg served as an advocate for the American Civil Liberties Union and worked towards ensuring that the 14th Amendment's guarantee of equal protection applied to gender. "I had the good fortune to be alive and a lawyer in the late 1960s when, for the first time in the history of the United States, it became possible to urge before courts, successfully, that society would benefit enormously if women were regarded as persons equal in stature to men,'" said Ginsburg in her commencement speech in 2002.

One of her major contributions, in the United States v. Virginia case, was when she argued against the all-male admissions policy at the state-funded Virginia Military Institute. She called the institute's ban on women applicants unconstitutional. "The constitutional violation, in this case, is the categorical exclusion of women from an extraordinary educational opportunity afforded men," she wrote in 1996.

The passing of Justice Ruth Bader Ginsburg is a tremendous loss to our country. She was an extraordinary champion of justice and equal rights, and will be remembered as one of the great justices in modern American history.

Ginsburg suffered five bouts of cancer but confirmed as late as July that she was still an active member of the court. "I have often said I would remain a member of the Court as long as I can do the job full steam," she said in July 2020. "I remain fully able to do that." In 2019, Ginsburg said she preferred to keep herself busy, even while fighting cancer. Her death opens a spot in the Supreme Court, carving open a political fight less than seven weeks before the election. Ginsburg's granddaughter revealed that she wanted her replacement to be appointed by the next president. "My most fervent wish is that I will not be replaced until a new president is installed," dictated to granddaughter Clara Spera days before her death, reports NPR. However, Senate Majority Leader Mitch McConnell wasted no time in moving towards replacing Ginsburg by stating that the Republican president would nominate someone to the Supreme Court pending Senate approval: "President Trump's nominee will receive a vote on the floor of the United States Senate." With the Republican party controlling the Senate, yet another Conservative judge could be installed in the Supreme Court, which would undo much of the progress achieved by Ginsburg among others from over the years.

‘Equality and justice under the law. Ruth Bader Ginsburg stood for all of us,’ said Joe Biden on Justice Ginsburg’s passing.

Donald Trump paid tribute to the Supreme Court Justice. "She led an amazing life. What else can you say?" said Trump. "She was an amazing woman whether you agree or not she was an amazing woman who led an amazing life." President Obama held Justice Ruth Bader Ginsburg in high regard, singling her out as "one of my favorites." In 2011, he said, "I've got a soft spot for Justice Ginsburg." She was regarded as a "judge's judge" for giving clarity on various positions and guidance of lower courts, and nicknamed "Notorious RBG" for her strong progressive liberal stance. "It makes absolute sense that Justice Ginsburg has become an idol for younger generations," said Justice Elena Kagan said at an event at the New York Bar Association in 2014. "Her impact on America and American law has been extraordinary. As a litigator and then as a judge, she changed the face of American anti-discrimination law. She can take credit for making the law of this country work for women and in doing so she made possible my own career," added Kagan.

"My dearest Ruth, you are the only person I have loved in my life."

In 2016, Justice Ruth Bader Ginsburg recited a handwritten letter that her late husband, Marty, had drafted to her when he was ill at a hospital in 2010. Listen here: pic.twitter.com/8f7rcH7Hyg

Justice Ginsburg was married to Martin Ginsburg, a noted tax attorney, who passed away in 2010. The pair met during their time at Cornell University. She is survived by two children. "I would just like people to think of me as a judge who did the best she could with whatever limited talent I had," said Ginsburg at an event at the University of California Hastings College of Law in 2011, "to keep our country true to what makes it a great nation and to make things a little better than they might have been if I hadn't been there."