trending celebrity people lifestyle news animals
Student Walks 20 Miles In The Dark So He Isn't Late For His Job, So His Boss Gifts Him His Vehicle

Student Walks 20 Miles In The Dark So He Isn't Late For His Job, So His Boss Gifts Him His Vehicle

Walter Carr started at midnight so he would reach his new job early in the morning. 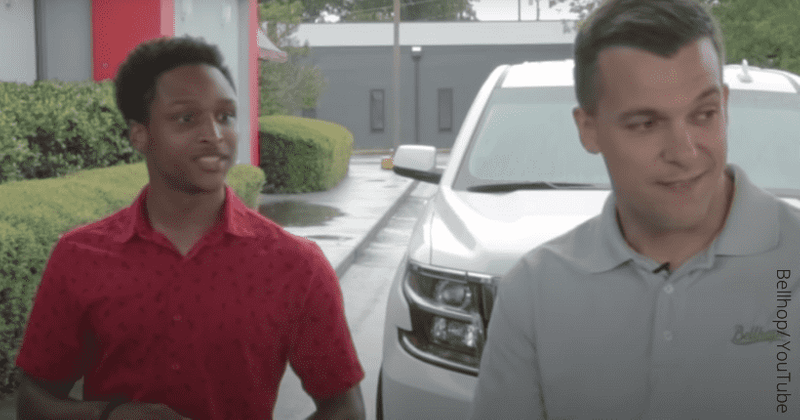 Walter Carr, a college student in Alabama had to report to his new job at a moving company. But as luck would have it, his car broke down just the day before. He knew he had to get to the job no matter what, and decided to walk 20 miles to the place. He started around midnight so he could reach early in the morning. While walking through the suburbs of Birmingham, a patrol of the Pelham Police Department caught up with him. They were touched when they learned of his story and decided to help him out. They drove him to a breakfast place first and then dropped him at the home of a company's clients where he was supposed to report. The customer, named Jenny Lamey, also learned of the boy's hardships and decided to retell his story in a post on her Facebook page, which received many reactions and heartfelt comments.

Proud to have encountered this young man. He certainly made an impact on us!#PelhamPD #belikewalter pic.twitter.com/d0zz0PMvnv

An officer who accompanied Carr to Lamey's house told her "he had picked up 'this nice kid' in Pelham early this morning," stated Lamey according to her post, as per a BBC report. She added, "The nice kid, Walter, said that he was supposed to help us with our move today. He WALKED ALL NIGHT to get from Homewood to Pelham. Because he needed to get to work. For those reading this that are not local, that's over 20 miles. The police officer said they picked him up earlier that morning, took him to get some breakfast, and once they checked his story out, brought Walter to our house." Lamey said she asked Carr to rest a bit but he refused and insisted on getting to work immediately. Carr told Lamey of his childhood in New Orleans, Louisiana, where he was originally from.

This deserves 1000 retweets! Read this amazing story about Walter, a new bellhop in Birmingham.

Major shoutout to the @PelhamPoliceAL officer who lended a helping hand. pic.twitter.com/eLgbAxg4uv

He and his family had to move to Houston, Texas after their home was destroyed in the devastating hurricane Katrina. "I just can't tell you how touched I was by Walter and his journey," Lamey wrote. "I can't imagine how many times on that lonely walk... in the middle of the night did he want to turn back. How many times did he wonder if this was the best idea. But he walked until he got here! I am in total awe of this young man!" she continued. Additionally, Lamey started a GoFundMe page for Carr, which ended up collecting over $90,000. For doubters of Carr's story, she wrote on the page, "All of Walter’s backup rides fell through, so he used Google Maps to calculate the time it would take to walk from his house to mine: 7 hours. That didn’t stop him."

"According to Walter, he ate something around midnight and headed out on foot in time to make it to my house before my 8 am move began," she added. Lamey's Facebook post went viral and soon reached Carr's employer, Bellhops. Its chief executive, Luke Marklin, just knew such dedication needed to be rewarded in a special way. So he drove all the way from the company's headquarters in Tennessee to meet Carr. He also had a surprise for him. While chatting with Carr, he handed him keys to his 2014 Ford Escape. Carr was in disbelief for a moment and asked Marklin, "Seriously?" and took the keys and hugged him. "I am honestly blown away by him. Everything he did that day is exactly who we are - heart and grit," Marklin said.

What an amazing kid and Great job to the Pelham PD

Carr said, "I wanted to show them I got the dedication. I said I'm going to get to this job one way or another. I want people to know this - no matter what the challenge is, you can break through the challenge. Nothing is impossible unless you make it impossible."