trending celebrity people lifestyle news animals
People Complained About A Stray Cat Roaming Around A Law Institute, So They Hired Him

People Complained About A Stray Cat Roaming Around A Law Institute, So They Hired Him

Dr. Leon Advogato is now an official employee of the Order of Attorneys of Brazil, and his job is to greet people at the door. 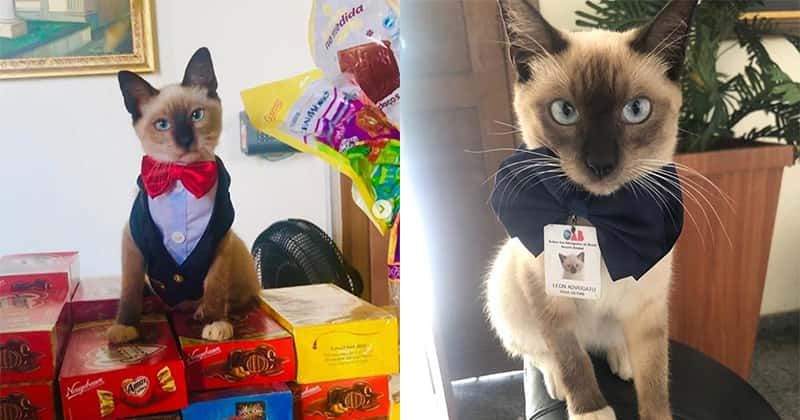 Not all cats are freeloaders who sit around the house snacking and looking adorable. Some cats have Very Important Jobs. Take Dr. Leon, for example, who has a cushy job at the Order of Attorneys of Brazil (the country's equivalent of the American Bar Association). Leon the cat walked into the organization's building one day looking for shelter from the rain, but several people had a problem with a friendly little stray hanging out at the reception desk. The company board found an easy and obvious solution to avoid more complaints - hire the cat. Dr. Jeanette Laredo recently posted about Dr. Leon's gainful employment and subsequent promotion on a private Facebook group, and the story quickly went viral online. Dr. Leon the lawyer cat now has his own Instagram page, with over 35,000 followers waiting for news of his antics with bated breath.

Dr. Leon's official job is to greet people coming into the OAB, but his presence means much more than that to the organization. “In February it rains a lot in the state of Amapá (Amazonia), so he arrived at OAB fleeing from the rain and thunder. For a week, he was fed and protected in a box. Until he got hired,” said Dr. Leon's representatives on Instagram in an interview with Bored Panda. The helpful humans explained that complaints were filed against Leon because he was very small at the time, and people were afraid they'd accidentally step on him. Also, he didn't exactly fit the vibe of the institution. “They said that there was no space for him because it is a serious institution," the representatives recalled. "So the President of the OAB determined the hiring and gave him an employee badge.” Now, Dr. Leon the lawyer cat gets to hang out at the institute as much as he wants. In fact, it's his job.

That's not all, though. Hiring Dr. Leon alerted the institute to the fact that there were many other animals in the area that may also need homes and help, and so, the OAB is in the process of setting up an organization dedicated to animal rights. “We are finalizing the documents to launch an animal rights institute. It’s called Instituto Dr. Leon," the representatives explained. "Unfortunately, we cannot house all the animals, so we will fund the NGOs in town. We will be an example for Brazil to follow.”

In the months since he was hired earlier this year, Dr. Leon has become a beloved fixture in the building. “Today, he is very dear to everyone," the representatives said. "Even those didn’t like him got used to his presence and have fun with him. His favorite place is President (of the OAB) Auriney’s sofa, he loves to play with his toys.” The hard-working kitty was neutered a few months ago, and has now recovered comfortably.  "But veterinarians say he had a problem with his vocal cords as a result of suffering as a baby," the representatives explained. "He hardly meows, but we keep taking care of him. This motivated us to create the institute to help abused and abandoned animals.”