The two widowed penguins were photographed holding onto each other as they enjoyed the brightly-lit Melbourne skyline. 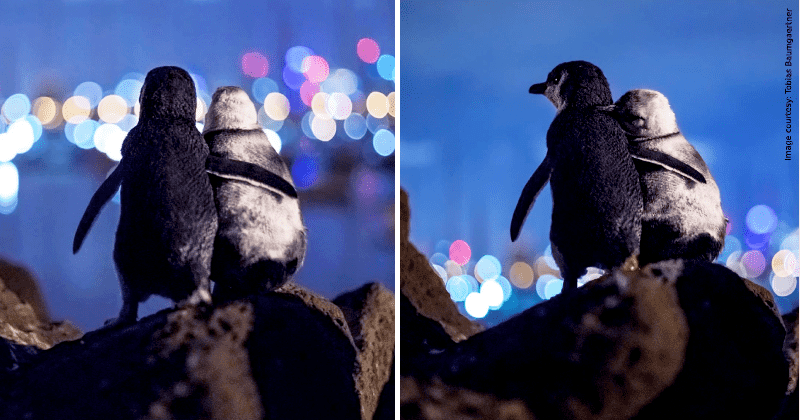 Sometimes you find love in the darkest of places and that was the case for 2 widowed penguins in Australia. The two penguins found love through shared grief after losing their respective partners. The story of the two penguins went viral after Australian photographer shared pictures of the two widowed penguins — one with its arm around the other — standing on a rock, staring into the horizon, and taking in the brightly-lit Melbourne skyline. The photographer Tobias Baumgaertner shared the image on Instagram almost a year ago, but the story went viral after a Twitter user tracked down the photographer because they were curious about the picture's backstory.

Matt tweeted: I couldn’t stop thinking about these penguins enjoying the Melbourne skyline together so I found the original photographer and apparently they’re BOTH WIDOWED I can’t handle it. Tobias Baumgaertner reposted the image as he recalled taking the picture. "During times like this, the truly lucky ones are those that can be with the person/people they love most. I captured this moment about a year ago," wrote Baumgaertner. "These two Fairy penguins poised upon a rock overlooking the Melbourne skyline were standing there for hours, flipper in flipper, watching the sparkling lights of the skyline and ocean."

couldn’t stop thinking about these penguins enjoying the Melbourne skyline together so i found the original photographer and apparently they’re BOTH WIDOWED i can’t handle it pic.twitter.com/gGgPVcOn9G

He then shared the incredible backstory of the penguins enjoying the Melbourne skyline. "A volunteer approached me and told me that the white one was an elderly lady who had lost her partner and apparently so did the younger male to the left." The photographer said the shared grief of the two penguins brought them closer and he added that watching the waves crash into the rocks and the Melbourne skyline together became a ritual for them. "Since then they meet regularly comforting each other and standing together for hours watching the dancing lights of the nearby city," wrote Baumgaertner.

The photographer said he had to wait three full nights to capture the picture he was going for. "I spend 3 full nights with this penguin colony until I was able to get this picture. Between not being able or allowed to use any lights and the tiny penguins continuously moving, rubbing their flippers on each other’s backs and cleaning one another, it was really hard to get a shot but I got lucky during one beautiful moment. I hope you enjoy this moment as much as I did," wrote the photographer.

He then shared another intimate photo of the penguins and spoke about the dynamics between the pair. "Love is the only game in which we win even when we lose,” wrote Baumgaertner. "The way that these two lovebirds were caring for one another stood out from the entire colony. While all the other penguins were sleeping or running around, those two seemed to just stand there and enjoy every second they had together, holding each other in their flippers and talking about penguin stuff. Pain has brought them together. I guess sometimes you find love when you least expect it. It’s a privilege to truly love someone, paradisiacal when they love you back," concluded the photographer.

Many could relate to the story of the penguins and the search for love. Instagram users were moved by the post. One user, Nokatt, who was familiar with the location and the penguins appreciated the photographer's perseverance in capturing the beautiful image: Such a beautiful story and amazing picture! I’ve been to the colony before and I can only imagine how difficult it was to capture this. Another user going by the handle flyingchong commented: I obviously see a lot of posts on the app, but I don’t remember the last time I was moved so much by one as I am from this. Simply beautiful. Roy Richardson commented on Twitter: As a recent widower, I completely understand this. It is hard to understand until you live it.