Earlier this week, officials found a dead sperm whale washed ashore in a national park in Indonesia with 6 kilograms of plastic waste in its stomach. 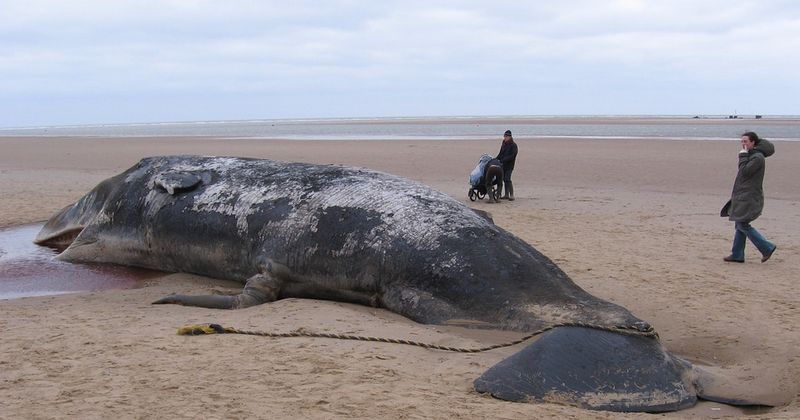 Over the years, the number of marine deaths caused by plastic has been on the rise due to a lot of the hazardous waste being dumped into the ocean illegally. Plastic is one of the most harmful things an animal can ingest as their systems are unable to break it down. A lot of times animals suffocate to death just trying to swallow plastic items, especially plastic bags. Bigger fish mistake plastic bags for jellyfish and swallow them while searching for prey. When a plastic bag is swallowed, it remains in the gut of the marine animal. This also slows down or sometimes even prevents the process of food digestion which results in a slow and painful death.

Once inside the system of the marine animal, plastic bags can only be removed by surgery. Plastic takes around a 1,000 years to break down which is why it is so harmful to even throw plastic into the ground as plants can no longer grow in those specific areas and the water gets clogged. When a marine organism with plastic in its body dies and decays, the plastic from its body is freed back into the ocean and ingested by another organism, and this vicious cycle continues. Conservationists and other wildlife organizations are trying their best to reduce these deaths but they can only succeed once countries stop dumping their plastic waste into the oceans or even on land that is accessible by animals, especially in the rural areas.

On November 20, a sperm whale was found dead on the shores of the Wakatobi National Park near Kapota Island, Indonesia. The body was around 9.5 meters long and inside the whale's stomach officials found 6 kilograms of plastic. The plastic items ingested by this whale were 115 plastic drinking cups, 4 plastic bottles, 25 plastic bags and two pairs of flip-flops. This is not the first whale discovered this year with large amounts of plastic inside its system and its discovery caused a lot of panic among the environmentalists and conservation organizations.

Measures have been taken to reduce the amount of plastic waste that is dumped into the sea. Conservationists have come up with multiple strategies and schemes to reduce the number of marine animal deaths caused by plastic, but the amount of hazardous waste that is already lying around in the oceans is far too much, making cleaning up the ocean a huge problem. Waste that was dumped into the ocean decades ago still affect the marine animals. Governments all over the world have been taking measures to clean up the oceans but the rate of marine deaths caused by plastic has not reduced.

Humans too are affected by the hazardous waste that we dump into the ocean. The waste does not just kill the animal or stay inside its body but also acts like a slow poison making the meat of the fish that we eat, toxic. The government in the UK conducted a research in 2015 which stated that at the rate the world is going in, the amount of plastic waste in the oceans will increase by three times by the time we reach the year 2025.

What is causing so much plastic waste to be found in the oceans? One of the major reasons is poor waste management or no waste management at all in many of the countries, especially in developing countries. The plastic waste from the cities is thrown into rivers and it flows directly into the ocean. Even if the water goes through a treatment plant, microplastics that are used in cosmetic products cannot be filtered out and end up in the ocean. Sometimes plastic is illegally dumped into the seas and oceans.

Another concern in a lot of developing countries is that the waste is thrown out on the streets and in places that are close to the shore, places that are affected when there is a flood. The floods drag this waste from the land into the ocean. This land waste is ingested by both land and marine animals causing irreversible damage to their systems. These marine deaths caused by plastic are a bigger concern today than they ever were as a lot of different species of fish (especially whales) are in the list of endangered animals; some even in the critically endangered list.

Just national parks and other conservation schemes to stop poaching are not enough to save them. Individuals too need to take responsibility for not throwing waste on the streets or in the ocean. It is not just the waste management companies that dump their waste in the ocean but even the tourists on the beach are very careless when it comes to disposing of plastic. Each cup, each plastic bag makes a difference.

Earlier this year, there were reports of another whale that was killed on the shores of Thailand after swallowing 80 plastic bags among other plastic items. The total weight of all the plastic found in the gut of this whale was eight kilograms. The excess plastic in the animals' system made it impossible for it to eat. When the conservationists found the whale, it was still alive and vomiting out blood trying to get the plastic out. It did manage to pull out 5 plastic bags. The conservationists tried to save the whale and nursed it well for almost a week until it finally passed away.