Daren Ford, 52, and Kerrie Rocket, 50, were paddling along the River Arun near Littlehampton in West Sussex when a seal decided to join them. 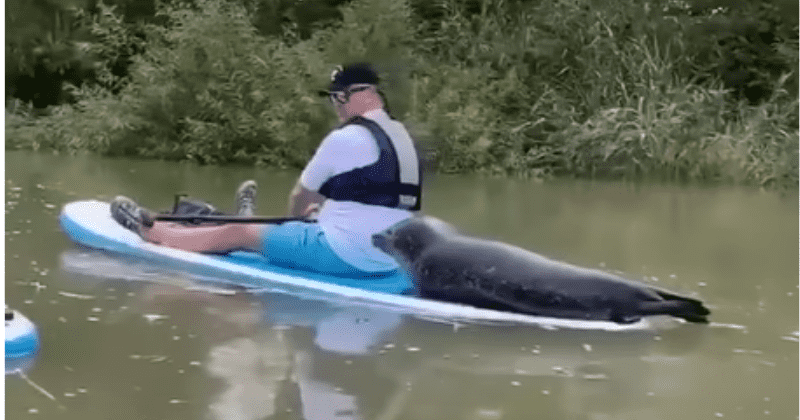 A paddleboarding family in England thought they were going to enjoy another typical day along the water. Little did they expect that they would be offering a free ride to the unlikeliest of companions. It was a rather shocking sight at first but it ended up being a really pleasant journey for both the hitchhiking seal and the family on board. Daren Ford, 52, and Kerrie Rocket,50, were having a calm glide down the River Arun near Littlehampton in West Sussex when a playful seal suddenly swims up to the group and climbs right up onto Kerrie's board. There wasn't any need for any introduction as this seal knew exactly what it was doing with the humans.

This is soooo cool!

Daren, who hails from Haling Island in Hampshire, was luckily able to record this encounter with a camera. Though it may seem unusual at first, as it's not every day you go paddleboarding with a friendly seal, it's a fine example of humans and animals interacting in a positive way.  According to Daren, a roofing company manager, they were just five miles up the river and had left their pontoon boat to get on their boards. They were paddling for an hour or so when this funny little incident took place.

. @Rose_Of_Dawn: Paddle boarders filmed the moment a curious seal climbed aboard for a ride down river in West Sussex, UK. Daren Ford and Kerrie Rocket were paddling along the River Arun. A curious seal, known locally as Gavin, swam up to the group and climbed onto Kerrie's board pic.twitter.com/caIhoYCara

“This was our first visit to this area and only my third time on a board,” he says, according to Good News Network. “We were chatting away oblivious that we were being followed by a seal. To our amazement, the seal just started going from one board to another jumping on and relaxing!”

Unfortunately for the seal, it wasn't a luxury cruise as Daren and Kerrie did not have any food with them. That would have really made the seal's day but it wasn't so. They were not seen encouraging him in that way either. The two of them kept their distance from the seal as much as possible and just paddled away, trying not to frighten or intimidate it.

Today’s good news— and I totally want to paddle board here! https://t.co/08TPnAAg0s

At first, the pair of them were a little worried that the seal could stir some trouble for them. There are reports of seals being a bit too aggressive near rivers but their fears were put to rest. This seal was healthy and apparently, not too hungry so it was just being a curious little companion.  “It was an amazing experience but it never really sank in until we got home and realized how rare this actually happens,” he added.

In related news, a kayaker on the River Arun got a surprise visit from a seal that is affectionately called Gavin by the people of Littlehampton. Nineteen-year-old Ashley Waller said, "At first we saw movement in the water, then he came up behind one of our friend's kayaks but he stayed his distance."

"We paddled off about 50 meters towards Arundel and could still see him. I had 1 percent battery left on my phone so I paddled back about 20 meters by myself, but with my friends nearby so that in case anything happened they were close by," Waller said. The gang was maintaining social distancing during their little trip down the river on their kayaks.

River Arun kayaker gets a surprise visit from Gavin the seal https://t.co/BWEJRyEkkI

He then added: "I waited about five minutes and there he was to my right, I captured the video just in time before my phone died and continued to stroke him". The young man got to share photos where he was giving the seal a pat of affection as his friends looked on. "I then paddled back to my friends and he once again followed us for about 20 meters then we lost sight of him."