The woman threw the shoebox and left her wallet at the store, making it easy for the police to find and charge her. 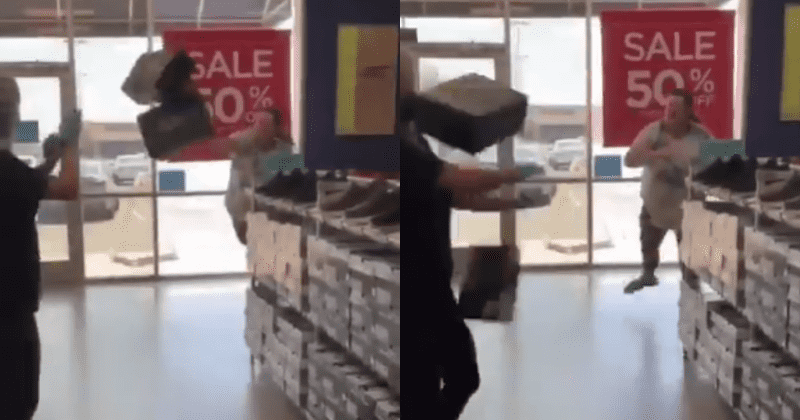 There has been an increasing number of instances of middle-aged white women acting out when asked to comply with safety guidelines and store policies. Something as simple as being asked to wear a mask to stem the spread of the virus sends these entitled people into a fit of rage. In the latest incident being dubbed 'Skechers Karen', a white woman can be seen throwing shoe boxes and shoes after being asked to wear a mask, as per store policy, reports Heavy.

With all.of these people freaking out about wearing masks, what happened to all of the preppers? All those people prepping for the end of the world and buying gas masks? They should be excited to finally use their stuff.

The incident occurred in a Skechers Store in Oklahoma City, Oklahoma when an employee walked up to the woman politely and asked her to wear a mask. Outraged by the request, the woman proceeds to pick up a shoebox and hurls it at the employee before quickly exiting the store. As she hastily departed, the woman reportedly forgot her wallet at the store which allowed the police to identify her. Myah Joycelynn, another employee, took a video of the incident and later posted it on her Facebook with the following description: So this happened at work today...🙄 stupid Karens. All we wanted was for her to wear a mask pls share this lol I hope this lady is embarrassed of herself and her actions. A user, Melissa Hope Lakin, commented: Have y’all been able to report her?? That’s assault and disorderly conduct for sure. Joycelynn responded and said they had indeed filed charges and wrote: Oh yeah we sent it to news stations and have reported and my co-worker pressed charges. Also the dumbass left her wallet at the store so we turned that into the police as well lol.

People across social media wrote about the entitled woman and her actions. User Sam Ian wrote on Twitter: These temper tantrums will continue b/c of media like Fox news who continue to instill fear and tell viewers about "their rights" They want viewers to believe that this is not a public health issue, but a left-wing conspiracy to take away their freedom. Trumpian's at their finest. ChicksDigScars wrote: Man, she left her wallet behind? I don't know what's better Karma. The cops having her name/address for the assault and battery charge or knowing that she was probably going to hit a couple [of] fast food drive thru's on the way home, and not be able to pay. No fried chicken for you!

Wow. Check out this video of a woman throwing shoe boxes at an employee for asking her to wear a face mask (store policy). This happened at the Sketchers off Memorial and Penn in OKC.

The woman apparently left her wallet at the scene...which was given to police. pic.twitter.com/FCgjO2HbTO

Moira Leisey made a brief social commentary, saying Karens like these are the same ones disagreeing with bakeries making cakes for same-sex weddings and wrote: I get people's feeling about not wanting to wear a mask, But I feel there's a 90% chance these are the same people that are okay with bakeries not making same-sex wedding cakes cuz businesses have a right to make their own policies. You're free to shop at another store. Meanwhile, Aaron, an anti-masker, agreed that store policies need to be followed even though you don't personally agree with them. He wrote: I'm on the side of the fence that face masks cause more harm than good (long term use anyways) so I avoid wearing it whenever prudent. But whenever I go into a store that has that as their policy I ALWAYS put it on before entering. Why? Because it is what that store requires.

The pandemic has been a testing time in the United States with large swathes of people continuing to still believe that the virus is a hoax and that the government is slowly inching towards totalitarianism, while others argue that it is their fundamental right whether or not they wear a mask.

Dang. She could’a used the shoes. Those flip flops needed an upgrade. Sorry, ShoeBox Karen. Next time mask up.

Remember what we were told? “If you don’t like it, then stay home”? Well... STAY HOME!