"When I held her in my arms, I was filled with joy. I felt that she was my daughter immediately," said Luca Trapanese of his daughter, Alba. 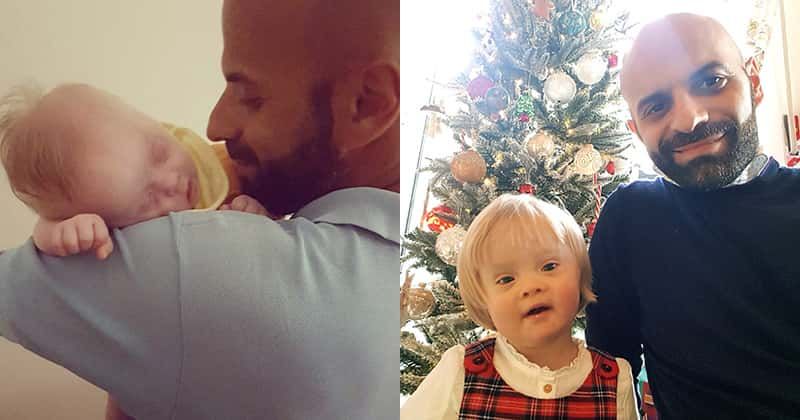 Luca Trapanese and his daughter Alba currently live an idyllic life. But it wasn't always like this for the 2-year-old blonde toddler and the 42-year-old Italian single dad. When they met, Alba was just a few days old, had been put up for adoption since she had Down syndrome—and had already been rejected by twenty families who couldn't handle adopting a child with disabilities. That's where Trapanese came in. Ever since he was 14, Trapanese had worked with various social service organizations, including “A Ruota Libera” Foundation, a group that provides assistance to children with Down syndrome. What's more, he wanted badly to be a father. "I wanted to become a father, to sow my knowledge, my love, my affection in another creature. Currently I have forgotten that Alba has been adopted and for me it is not a foreign body,” he said in an interview (in Italian) with BonCulture.

“A disabled child is not a second choice, but a conscious choice with respect to my vocation and my abilities”, Trapanese explained to Coccole Bimbi Journal. “I was not afraid of adopting a disabled child. It was an idea I had in the past years with my partner Eduardo, but then we separated." He added, "Since I was 14, I volunteered and worked with people with disabilities so I thought I had the right tools to do it, after the separation with my partner it was the option that prevailed for me. So I made a request in the special register that allows singles to adopt in special conditions." But adopting Alba wasn't an easy task by any means since adoption agencies usually prefer "traditional families" over adopters that don't fit the conventional two-parent heterosexual relationship mold. Trapanese's case has had a significant impact in his home country, Italy, where adoptions by gay couples are not allowed, and adoptions by single parents were very complicated until recently. In a conversation with the BBC, the 42-year-old father said that his story destroys many stereotypes about fatherhood, religion, and family. He recalled, "I still wanted to be a dad (after separating from my partner), but in Italy, single parents still couldn't adopt. Then things changed and at the beginning of 2017, I could offer to adopt children. They told me that they would only give me children with illnesses, severe disabilities or behavioral problems, a child who had been rejected by all traditional families."

Trapanese was overjoyed. "I completely agreed. Thanks to my personal experience, I knew I had the resources to deal with the problems the child had." And that's how he met Alba. "In July 2017 they called me and told me they had a girl for me, her name was Alba and she was 13 days old. She had Down syndrome," he recalled. "The mother had abandoned her at birth and had been rejected by more than 20 families. I struggled to contain my joy. I said yes immediately." The minute they met, he knew he'd found his daughter. "When I held her in my arms, I was filled with joy. I felt that she was my daughter immediately. I knew I was ready to be her father," he said.

Now, Alba is almost 2 years old and full of life. "She has a very strong personality and can be very stubborn at times. She likes to play and dance all day," Trapanese said. "She loves being with other people, so I take her to walk to the park, to museums or to work with me, which she loves." The happy father shared his story in a book, Nata Per Te (Born for You), published last year. "Now I see a future for myself: I will spend the rest of my life with a girl I love and we will do many wonderful things together," he said, contented.