The part of the Beluga whale's head that looks like a soft bulb is actually called "the melon". It is filled with oil and wax and acts a protection for the brain along with the skull. 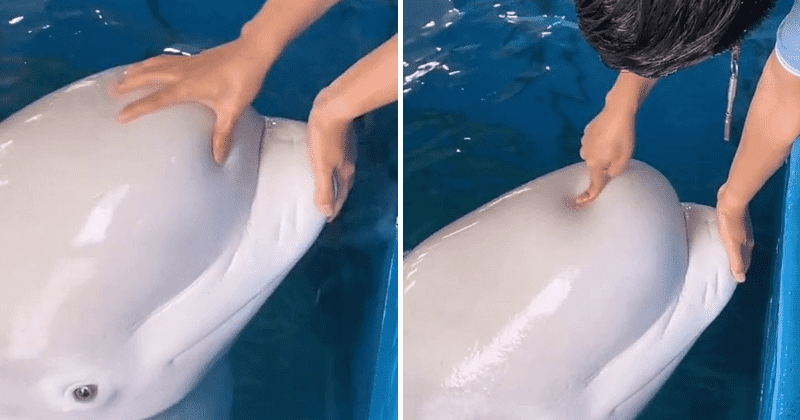 In a shocking video, a man has been spotted poking and squeezing a three-year-old Beluga whale at a Chinese aquarium. The footage was filmed in Shenzhen, south China, on August 12.  According to the local media in the region, he did it to show nearby children how soft it is. The man may have been an aquarium employee, as he said he spends time with the whale. The man, who was later identified as Dabai, said that he has built a relationship with the mammal and interacted with it every day, Daily Mail reports. "Our relationship is very good. It is very good most of the time, but sometimes it is very naughty and will spray water at me," he said.

Man squeezes Beluga whale's head at Chinese aquarium 'to show how soft it is' https://t.co/P6NIXL2Uhf via @NewsNowUK

"In this video, I'm touching its head and its head is super soft.  Then it laughs super cute. I chat with it every day and it uses movements to respond to me," he added. That being said,  not everyone who saw the video thought it  was "cute" with some taking issue with the man's actions. "It's not safe to poke a Beluga's head," one concerned viewer wrote.    The part of the Beluga whale's head that looks like a soft bulb is actually called "the melon". It's an organ which directs and modifies the frequency of the animal's sound waves. Basically, it's a sensitive and important part of its head and shouldn't be meddled with in any way. It is soft because it is filled with oil and wax so that the brain is well protected behind the melon and the skull.

Beluga whales are known for their friendly nature, much like dolphins.  While dolphins are busy playing baby shark volleyball (seriously, this happened) and even attacking members of their own pod, like bottlenose dolphins often do, Beluga whales are busy non-violently socializing with each other. The majority of Belugas live in the Arctic Ocean and the seas and coasts around North America, Russia and Greenland.

Their worldwide population is thought to number around 150,000. These days, you will find Belugas in captivity at aquariums, dolphinariums, and wildlife parks all over North America, Europe, and Asia. Their color and expression as well as their gentle amiability have won the hearts of the public.

Maybe it’s not uncomfortable but do they know for sure it doesn’t do damage? I mean for instance, it wouldn’t hurt to press a baby’s fontanels but I wouldn’t do it. I wouldn’t have a beluga whale in captivity either tbh.

Studies have shown that male Belugas in captivity can mimic the pattern of human speech, several octaves lower than typical whale calls. Beluga whales have been been known to sound human, and they often shout like children in the wild. At this aquarium though, it did not appear as though the Beluga whale was communicating with Dabai. Despite his actions, there were several commentors who felt that he wasn't hurting the whale. A trained animal caretaker would be quite familiar with the animal, not just the distinctions of the species but also the personal qualities of the ones under their care.

Shocking moment a man pokes and squeezes a Beluga whale's head at a Chinese aquarium https://t.co/5u0l81aoWA

It was recently reported that two Beluga whales from a Shanghai aquarium were taken to Iceland to live out the rest of the days. These lucky whales would be placed in a unique marine sanctuary that conservationists hope will one day became a model rehoming for thousands of these creatures. The conservation charity Sea Life Trust, which has been at the forefront of the project, said the bay is the world's first open water Beluga sanctuary and had been selected to "provide a more natural sub-Arctic environment and wilder habitat for these amazing whales to call home". "We have been working with Little White and Little Grey for the last 18 months to make sure that they will be prepared and ready for the long journey," said Andy Bool, head of Sea Life Trust.

Amazing Rescue Lets Two Beluga Whales Swim in the Sea for the First Time Since 2011 https://t.co/GULEYAVIVV