The Iraq war hero and Purple Heart recipient said she was not shocked but appalled. 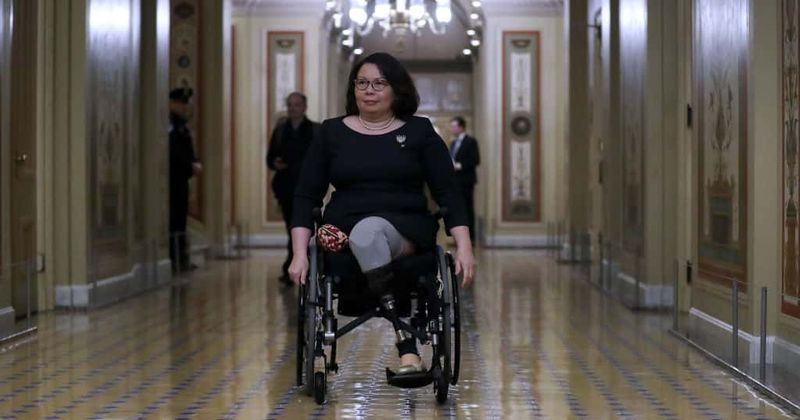 American veteran and war hero, Senator Tammy Duckworth has hit out at President Donald Trump for his alleged insults of fallen American soldiers, calling them "losers" and "suckers" back in 2018. An Illinois Democrat and a Purple Heart recipient who served in Iraq as a helicopter pilot, Duckworth lost both her legs in 2004 when her helicopter was shot down. Speaking at a call organized by the Joe Biden presidential campaign, Duckworth spoke particularly strongly about Trump reportedly shunning the presence of wounded veterans at public events. According to a report in HuffPost, she said, “I am not shocked, but I am appalled. Then again, this is the man who spent every day refining the concept of narcissism. Of course, he thinks about war selfishly ... because that’s how he’s viewed his own life."

Reacting to a report that President Trump called fallen soldiers “losers” and “suckers,” Senator Tammy Duckworth said, “I am not shocked, but I am appalled.” https://t.co/fPuh9kW9nE pic.twitter.com/2WZ4GwR8DT

She added, "He doesn’t understand people’s bravery and courage because he’s never had any of his own.” Referring to Trump dodging drafts for the Vietnam War citing a minor ailment, Duckworth said further, “I’ll take my wheelchair and titanium legs over Donald Trump’s supposed bone spurs every day.” Duckworth was one of the contenders to become Biden's running mate in the 2020 elections until Senator Kamala Harris was chosen. She has been an outspoken personality about issues related to veterans in the Senate. Her remarks came after The Atlantic published a story about Trump allegedly refusing to visit the Aisne-Marne American Cemetery near Paris in 2018, the site of American soldiers who died fighting during World War I. The visit was eventually canceled at the last minute.

What @realDonaldTrump will never understand is that our Wounded Warriors earned their wounds. They are our badges of honor from our service to the country we love.

If he can’t bear to witness those who have sacrificed for our nation, perhaps he should avert his cowardly eyes. https://t.co/wQ8mCLgWei

The reason was said to rain since “the helicopter couldn’t fly” and that the Secret Service wouldn’t drive him there. The report, however, said both the claims were false. The real reason, reported The Atlantic, was that Trump feared his hair would become disheveled in the rain. But a more serious reason was that Trump thought fallen soldiers did not deserve respect. According to four sources "with firsthand knowledge of the discussion that day" quoted by the publication, Trump allegedly said, “Why should I go to that cemetery? It’s filled with losers” on the morning of the scheduled visit. In another conversation on the same trip, Trump referred to the more marines who lost their lives at Belleau Wood as “suckers” for getting killed.

Ooooooo, more "secret sources" divulging character thrashing "evidence" of Trump's inexplicable hatred for veterans 2 months before the election to a readership that religiously agrees to every premise NYT espouses before even reading a word; true journalistic integrity.

Alyssa Farah, a White House spokesperson, sent this statement to the publication after the story was posted: “This report is false. President Trump holds the military in the highest regard. He’s demonstrated his commitment to them at every turn: delivering on his promise to give our troops a much needed pay raise, increasing military spending, signing critical veterans reforms, and supporting military spouses. This has no basis in fact.” Trump's disrespect for veterans and their families is not new. Probably one of the most publicized instances and one on record is his disparaging of the late Senator from Arizona and former navy officer, John McCain, who ran for the presidential elections in 2008. McCain, a war hero, spent five years in captivity in Vietnam.

Speaking at a family leadership summit in Iowa in 2015, Donald Trump called McCain "a loser", reported the Detroit Free Press. He called McCain "not so hot" and added, "And I supported him for president! I raised a million dollars for him. That's a lot of money! I supported him. He lost. He let us down. But he lost. So I never liked him much after that, because I don't like losers." The moderator then pointed out the McCain was a war hero, to which Trump replied, "He’s not a war hero. He’s a war hero because he was captured." He added, "I like people that weren’t captured." Later that day, Trump apparently retweeted, an article headlined "Donald Trump: John McCain Is ‘A Loser’." His tiff with McCain has continued even after his death and has even involved McCain's daughter, who has often sparred with Trump online.

This is how Trump treats veterans. Senator & ret. Army Lt. Colonel Tammy Duckworth is a combat veteran of the Iraq War. In 2004, her helicopter was hit by an Iraqi insurgent rocket-propelled grenade. She suffered severe combat wounds which caused her to lose both of her legs. pic.twitter.com/EXa1ZEKf45