The heartwarming photo went viral, and people called it the cutest thing ever. 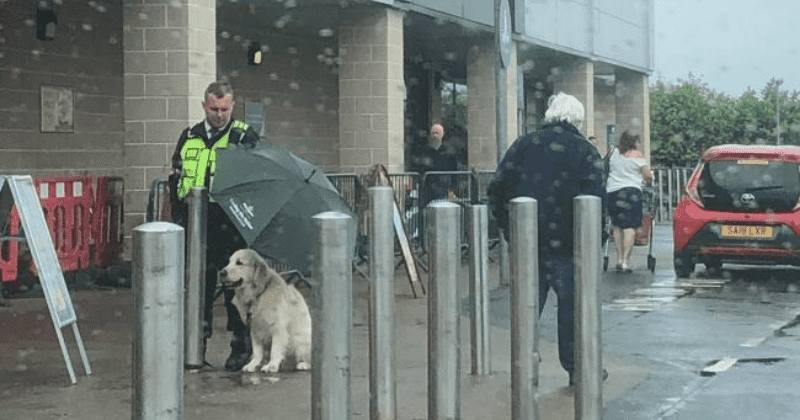 Not all heroes wear capes and some of them happen to have uniforms on them. A security guard who works at a supermarket has just won all of our hearts as he stood patiently in the pouring rain to shelter a dog that was waiting for its owner. Ethan Dearman who works at Morrissons was photographed braving the rain outside the supermarket in Giffnock, Glasgow on Sunday. The images were taken by 25 -year-old Mel Gracie who saw Dearman holding a green umbrella over a golden retriever Freddie who was quite thankful at the help he was receiving from a stranger, Glasgow Times reported.

Well done that man! Who on earth leaves a poor dog sitting out in the rain??at least find it cover if you’re going in a shop and as for leaving them out in hot weather! 😡 some people. don’t deserve to own one! No excuse 👊🏼

Gracie, a tattoo artist, posted the images online and they have been shared over 15,000 times since Sunday evening. She wrote: "Shout out to this @Morrisons security man keeping this good boy dry. " There was a forecast for downpours in Scotland when this noble act took place.

Shout out to this @Morrisons security man keeping this good boy dry. He said ‘well you never know how dogs feel about the rain’ pic.twitter.com/B9CPWI7u5Q

Despite the heavy rain, the security guard stood vigil over the dog, as the dog relaxed underneath the umbrella. Dearman later quoted Gracie's tweet, telling his followers, "Looks like I made a lot of people happy today."  According to Daily Mail, one user named Jenny, replied: "You have! What a lovely, thoughtful thing to see. Morrisons is lucky to have you as this picture is an amazing advert for them. I hope they give you a bonus because you deserve one." Gracie's post has racked up over 120,000 likes on social media and has delighted everyone.

Found out the security guard is @DearmanEthan - thanks for making a lot of people happy today!

Several other users were also quick to exclaim their heartfelt joy at the kind act that Dearman did, the outlet reported.  Danika Ripley wrote: "This is the cutest! Well done, Ethan!'
Paul Malyon added: "Nice work Ethan!" And Ellie Wixon said: "Awww this is so sweet!" Later on, Freddie's owner also found out what had happened and extended a well-deserved token of gratitude to Dearman by sharing a snap of the dog as a puppy. David Cherry said: "Thanks to security man @dearmanethan for putting the umbrella over Freddie when it started to rain! So kind! He's always so nice to my brother Stuart, my Dad and our Freddie!"

Morrison has been by far the best retailer during the crisis .. sensible, safe and friendly approach. Only one who created a quick queue for basket shops which is so simple and brilliant yet none of the other big chains have introduced it. 👏👏

A spokeswoman for Morrisons also chimed in by remarking on the incident "It’s going to be a wet week so we’ve issued nine thousand Morrisons umbrellas to keep our customers – and their dogs – dry.  It’s good to see that it is already happening in our Giffnock store." Another reply read: "That is amazing. The fella was like ‘I don’t mind the rain.. but the dog might not fancy it’" Another person said: "That is *lovely*. Hope Morrisons give him a treat for being the good boy's good deed doer."

top man...what I can't understand is if you know your going shopping in a supermarket why take the dog with you.....and I have a dog to....who I can guess thinks to itself I'm going to sleep if there of shopping.....

Similarly, a Filipina actress, TV host, visual media artist, philanthropist, and socialite Heart Evangelista made a statement on her social media on Monday that she helped rescue a dog that had been abandoned under the rain. Evangelista, who is currently serving as the first lady of the province of Sorsogon, said that the dog had been abandoned at the Bonifacio Global City Arts Center in Taguig. "She will have water and food to eat then will be brought to [the] vet. I will make sure she goes to school and have the best life. Good luck, karma is real, people. Hopefully, someone will give her a home," Evangelista said in a series of Instagram stories photos showing the dog, which she named Cloud.  "To the 5 people who left her there to die... Shame on you." she added.