trending celebrity people lifestyle news animals
Seattle Has Not Seen The Sun In Over 90 Days, Gloomy Weather To Continue This Week

Seattle Has Not Seen The Sun In Over 90 Days, Gloomy Weather To Continue This Week

Seattle has been experiencing unprecedented rainfall continuously for 28 days, something that has happened only twice before. Once in 1953 and the other time in 2006. 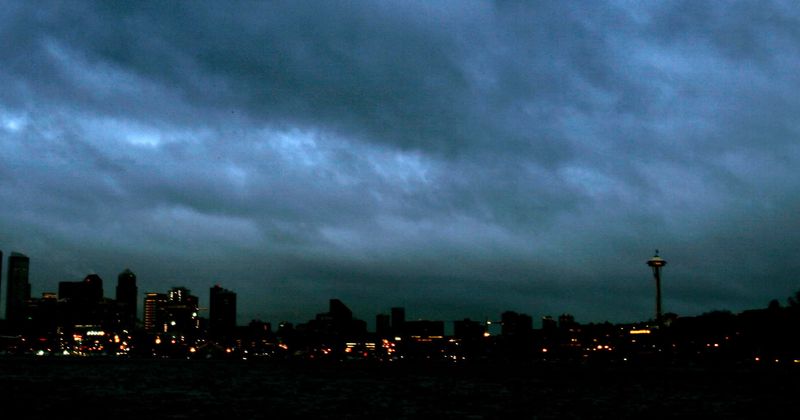 If it is always sunny in Philadelphia, then looks like it's always cloudy in Seattle. Washington State’s largest city and home to tech giants, Microsoft and Amazon, the sun has hardly visited the Emerald City in 90 days. The city has been going through a period of gloom and has been experiencing rain continuously for the past two months. According to the Seattle Times, the next week is also going to be a wet one, with rains predicted for every day of this week. It is now on track to set a record for 28 rainy days in January as stated by Dana Felton of the National Weather Service.

What is this?! Seattle rain and clouds? No way! Another gloomy day for the Emerald City and more on the way, unfortunately. #wawx pic.twitter.com/T3fuS9cai5

“The chances are real good it’s going to rain the rest of the month,” the meteorologist said Monday. Seattle usually gets up to 15 days of continuous rainfall in January but the unprecedented rainfall continuously for 28 days happened only twice before. Once in 1953 and the other time in 2006. The Quillayute, Forks, Hoquiam, and Olympia regions are likely to set the record for measurable rain every single day. The current record of rainfall measured in the regions of Quillayute and the Twilight town, Forks is 24.02 inches which will soon be broken as the rainfall measured in the region is already 22.28 inches.

With rain this morning, it has rained every day this month at Quillayute, Hoquiam & Olympia. There is an excellent chance that all 3 locations will get rain every day in January, the 1st time it has happened at Quillayute & Olympia. Forecast for the area this week...wet. #wawx pic.twitter.com/Eghv5SkQXs

Facebook user, Frank Meade commented, "I love the liquid sunshine! We know that rain makes Washington the most beautiful place to live! As a Bostonian transplant, I will take the rain over blizzards any day!" But not everything is fun and beautiful when it is raining as much as it is. This type of weather makes soil saturated from a high amount of rainfall making it prone to landslides. According to Q13 Fox, much of western Washington is under a flood watch. The risk for landslides is high with several more inches of rain on the way.

⚠️ LANDSLIDE DANGER ⚠️
Repeated periods of rain over the past several weeks & additional rain today will lead to an increased threat of landslides being triggered through tonight, mostly for the coast and foothills. More safety info available at https://t.co/5XGZ89K9uG
#wawx pic.twitter.com/IFGWm4SZj1

There must be a reason the vampires of Twilight gathered in this gloomy region of Seattle which has not seen the sun in over 90 days. The last official sunny day was experienced on November 30 last year. After that, there were two other days in December that were partly sunny, December 15 and Christmas Day. But even on those days, there was 70% cloud coverage, reports Komo News. A sunny day requires that the sky has one-eighth or less cloud cover. Sarah Ahlgren who wrote on Facebook, "In other words it's winter. I'm looking out my window right now at a gray Seattle day. But I'd take that over ice and snow." According to reports from CNN, forecasts for the next week show the possibility of a break from gloomy clouds to give us a sunny day on the occasion of Groundhog Day.

Will Seattle get to see the sun anytime soon? An atmospheric river has been funneling moisture into the Pacific Northwest where it has rained everyday in Seattle since December 29th. In fact, there has not been a sunny day there since November 30th. https://t.co/PPhSUdrrjC pic.twitter.com/fDLZro4Oro