The incident in the Faroe Islands has horrified people from all over the world due to its gruesome nature. 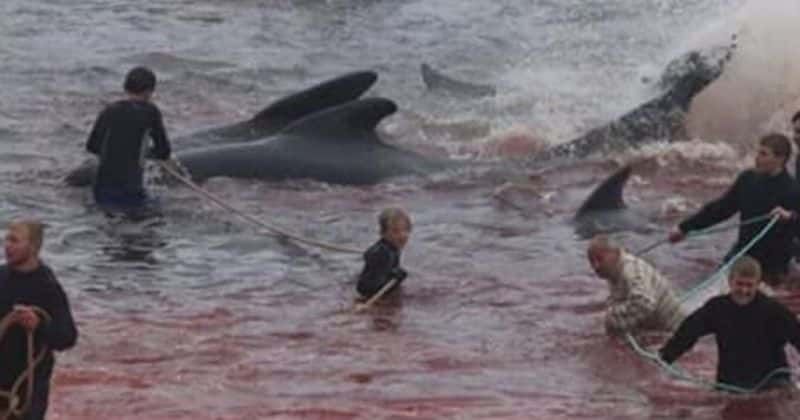 In the Faroe Islands, the sea has turned red after locals slaughtered over two dozen whales as part of an annual ritual that is said to be over 1,000 years old. The incident sent shockwaves across the world for its barbaric nature reports BBC. It resulted in the death of over 250 whales, where an average of 800 whales are hacked to death on a yearly basis. According to Mirror, a charity group called ORCA lobbying to end the slaughter revealed that it was an "insane blood sport" and that it was carried out with knives by licensed hunters. Sea Shepherd, a campaign group, captured the pictures and released them to the public.

In a statement, Sea Shepherd said, "252 long-finned pilot whales and 35 Atlantic white-sided dolphins were killed in Hvalba last night after the huge pod was found off Sandvik. This is the first organized grindadrap hunt of 2020..." The organization continued, "...with the meat from the hunt distributed first to the approximately 70 hunt participants from the boats and those killing on the beach - and then the remainder to villages on Suðuroy with all recipients then free to sell their share of the meat if they so wish." Reportedly, more than 100,000 pilot whales swim along the coast of the Faroe Islands each year.

I learnt about this a month or so ago, from a television programme about other wildlife.
I have been wondering what can be done since.
Sea turns red in Faroe Islands as 250 whales slaughtered in 'barbaric' hunt https://t.co/ETHE7n2lf4

Alastair Ward, who witnessed and photographed the event for Triangle News Agency told BBC, "They were driving them into the bay, prodding them with their oars. Once they got close enough, the whole town sprinted in and started hacking at them. Even the children were getting involved, pulling on the ropes and jumping on the carcasses. We were just sat there speechless and a bit upset but you couldn't really pull yourself away." At one point, Ward recalls hearing the whales squeal in agony and being completely disgusted by it. "The squealing from the whales was horrible. They were putting hooks on ropes in their blowholes to pull them in and then hacking at them with knives. They didn't die in a very humane way," he said.

Comprising 18 tiny islands, the Faroe Islands is located in the North Atlantic between Iceland and Norway. As per tradition, hunters kill over 800 pilot whales annually as they are one of the major food sources during the winter, feeding over 50,000 Faroese. All hunters are expected to have a license provided by the government, and the tradition although prevalent for centuries, is likely to shock outsiders due to its gruesome nature. As per visitfaroeislands, a tourism website, the activity is called Whaling and is a community activity that every citizen can take part in. "As has been the case for centuries, whaling still occurs in the Faroe Islands today. The Faroese have eaten pilot whale meat and blubber since they first settled the islands over a millennia ago. Today, as in times past, the whale drive is a community activity open to all, while also well organized on a community level and regulated by national laws," it stated.

Might be part of their culture as someone quoted but times moved on! No need to slaughter such animals!

The site also states that all records of pilot whale hunts have been maintained since 1584 and the tradition is considered sustainable as close to 800,000 whales are said to live around the eastern North Atlantic regions. "The meat and blubber from the hunt is distributed equally among those who have participated. Those who are too ill or weak to take part are encouraged to sign up for their share, even though they have not taken part," the government's official tourism enterprise said.

Maybe if humans treated animals and nature with more respect there would be less pandemics flash floods droughts and extinctions (the human one pending).