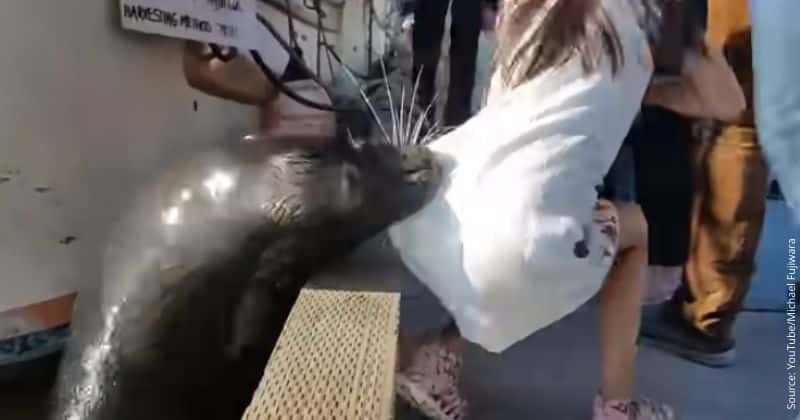 A family in Richmond, British Colombia was enjoying an outing near a dock at the Steveston Fisherman's Wharf, but their day quickly took a dark turn. The entire incident was captured in a video by an onlooker who was filming the animals. It showed a sea lion swimming in the waters observing the humans above him, as the crowd marvels at the sight. The six-year-old girl comes into the frame and is seen kneeling down near the edge of the dock to get a better view. The sea lion bobs up towards the little girl's face, as the girl laughs and the crowd "oohs" and laughs as well admiring what they assumed was the sea lion's playfulness.

She then sits on the edge of the dock, and in a split second, the sea lion grabs her by her dress and drags her into the water amid horrified screams. A man quickly jumps in as soon as the girl fell into the water, and rescues her.  Both the man and the little girl are helped by the others to get back onto land in a matter of minutes.

WOW!! Thank God she's okay. I Think the seal realized she wasn't food, could have been a real tragedy! Don't Feed Wild Animals!

CBC reports that the man in question was the girl's grandfather.  According to another CBC report, the girl's family also came under heavy criticism for their "reckless behavior." Robert Kiesman, chair of the Steveston Harbour Authority, said there are several signs posted at the popular tourist destination warning people not to feed the sea mammals that frequent the area. Simon Fraser University student Michael Fujiwara who took the video had stated that a family was feeding the sea lion bread crumbs while the girl got close to the edge of the dock. People on social media assumed it was the little girl's family. However, the family in question has denied doing so. The girl's father said, "There was somebody beside them that was trying to feed them. Also, they weren't trying to take pictures or anything."

Let's be relieved everyone is ok and grateful for the quick acting gentleman: "Let those who have never sinned throw the first stone!"

Fujiwara told Bored Panda, "I was just sitting by the dock and then this sea lion popped its head out of the water just in front of me. I just took out my cell phone and started filming. The sea lion actually attracted a lot of attention from the visitors there, including the young girl… She and her family, I guess, they came, they started feeding the animal bread crumbs or whatever it was, and then I guess the animal got a little too comfortable."

The Lau family decided to set the record straight after being falsely being accused of feeding the animal. Lau admitted he made the mistake of allowing his daughter too close to the animal. "My daughter went to the front to try to see the sea lions, to get a closer look. The sea lion got hold of her dress and dragged her into the water. That's a lesson she took and she has taken that lesson in a hard way," he told CBC.

All too often in situations like this, it is the animal that suffers the consequences of human error. Just happy all are okay.

The girl was rushed to a hospital where she was treated for a small wound with antibiotics. However, the Vancouver Aquarium officials warned that a sea lion bite could be fatal and needed a more specific form of treatment. As for the grandfather's heroics, Lau said, "If he had one- or two-second doubt about that, my girl could have been gone by then. That reaction makes him a hero."