In a gut-wrenching incident, the principal of a school in India resorts to humiliating six little boys for being late, forcing them to strip naked and stand under the hot sun. 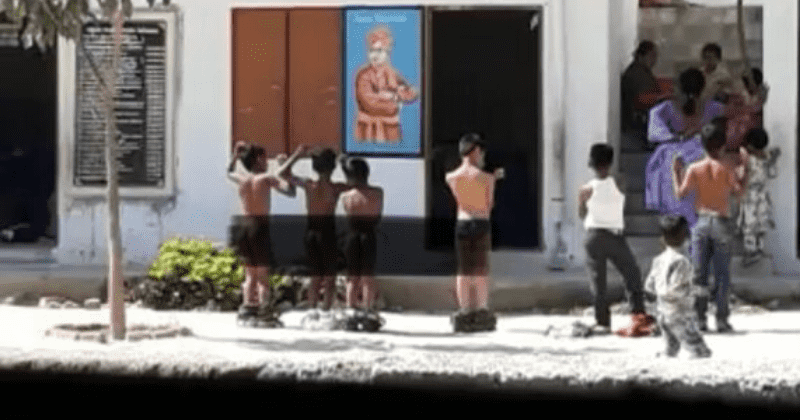 Growing up, we have all been taught lessons in punctuality that have helped us learn to respect time. For six young boys in India, the lesson came at a costly price. The shocking incident took place in a private school in the Indian state of Andhra Pradesh, called Chaitanya Bharathi School. The young boys aged 9-10, were running late for school, much to the principal's chagrin. Instead of detention or issuing a warning, the principal settled to mete out an inhumane, humiliating punishment that ended up being filmed and circulated on social media. In just grades 3 and 4, the little boys were made to strip off all their clothes and stand naked under the blazing sun, in front of the school, in full view of teachers and other students. The poor little boys can be seen standing with their bony arms in the air and their pants pulled down to their ankles.

The principal, Maharaja Naidu, who also owns the school is on the run, following mass outrage over the heartbreaking video. Parents flocked to the school in droves staging protests the very next day, infuriated with the school's approach to discipline. Several parents also spoke out about their children being punished for not finishing their homework. The incident also grabbed the attention of child rights activists. It is truly appalling to see the depths of degradation a man who is supposed to be an educator could think of inflicting upon impressionable young children.

As the video began to spread like wildfire, authorities began to scramble and use their clout to cover up the issue and sweep it under the heaviest rug they could find. Talking to TNM, president of Hyderabad-based child rights organization Balala Hakula Sangham, Achyuta Rao revealed that the principal has managed to garner the support of the Mandal Educational Officer (MEO) who is helping him hush up the atrocities he subjected his students to. It is deeply concerning when individuals in positions of power, shirk their responsibilities and turn a blind eye to injustice.

Rao explained, "Our organization had a word with the MEO. Instead of immediately canceling the recognition of the school, the MEO Leela Rani is trying to cover up the issue and has said that she will be taking up the matter with the higher authorities." Rao continues, "Is that how an issue of such serious nature has to be dealt with? The principal of the school should be booked under POCSO (Protection of Children from Sexual Offences) Act as it’s a clear case of exploiting the children’s modesty." Importantly adding, "The children should also be given psychological counseling in the aftermath of such a traumatic experience."

Rao's organization sprung into action and promptly filed a complaint with the National Commission for Protection of Child Rights (NCPCR). They have also been firm on their demand that action must be taken against the absconding perpetrator under the POCSO Act. The police were dragging their feet when it came to registering a case against the school management, possibly thanks to the influence they wield. It has been close to a month since the horrific incident, yet there have been no updates on whether the principal has been captured and brought to justice.

Chittoor DEO BP Pratap Reddy spoke to local media and reassured them that an investigation into the troubling incident is in fact underway. In an attempt to appease the enraged masses and activists, he also said that the school's recognition would be withdrawn for the 2019-2020 academic year. There seems to be a rather disturbing trend of violating child's rights in schools in Andhra Pradesh. More often than not, humiliation and fear are used as predominant weapons of choice by ruthless educators. There seems to be a dire need for psychological evaluation among the staff before allowing them near young children and especially before allowing them to wield authority over them.

Andhra Pradesh- Chittoor DEO tells me that investigation is underway on the incident where students were punished and made to stand naked in Chaithanya Bharathi School, Punganur. DEO says recognition of school for 2019-2020 could be withdrawn. #AndhraPradesh @CRYINDIA #POCSO pic.twitter.com/BRDgQL1qWw

In 2015, two students of a government school landed in the hospital after being made to kneel outdoors after taking their clothes off. After three hours in the sun, the two students, who were also brothers, collapsed. In this case, the two teachers who were held responsible were suspended, which is hardly a slap on the wrist considering the gravity of what they had done. They had endangered the lives of students in their care. In another incident, a 13-year-old girl was forced to take a pregnancy test by the school principal based on suspicions she was having an affair with a teacher. There is clearly a need for expedited justice in these scenarios and also a far harsher penalty than just mere suspension, considering the kind of punishment the perpetrators are used to handing out.