The Canadian show made a clean sweep for all the key categories after winning a total of nine awards in 2020 Emmys. 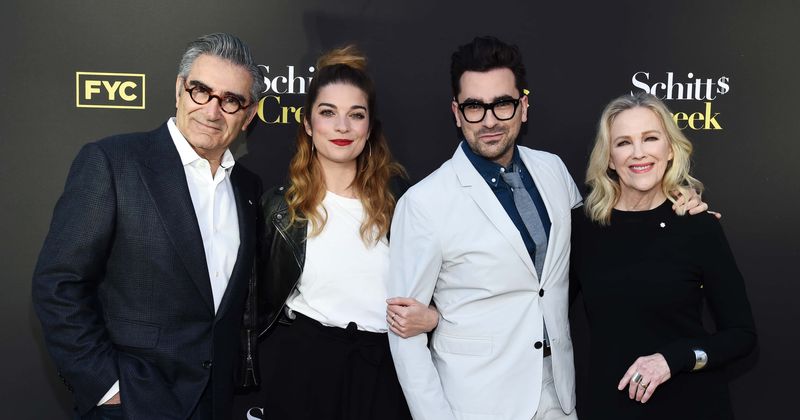 It's nearly a clean sweep at the 72nd Primetime Emmy Awards after Canadian comedy Schitt's Creek ended the night with an unprecedented and record-breaking nine awards for its sixth and final season. On Sunday night, the Emmys had brought together dozens of video feeds from all the nominees from different places in the world, but as things went, it was only one that was ultimately required. The show also set a new record—most awards ever for a comedy in a single year, reports the New York Times. Catherine O'Hara picked up her first-ever acting Emmy of her career for her role as Moira Rose.

With Catherine O'Hara, Eugene Levy, Dan Levy and Annie Murphy winning their #Emmys tonight, that means our little Canadian show is the first comedy OR drama to ~ever~ sweep all four acting categories, and that is absolutely wild 🇨🇦 pic.twitter.com/fEUnaLoDBr

The 66-year-old received her much-deserved award and was overjoyed by the victory, which she accepted gracefully in a black dress and a matching mask. "This is so cool," she said in her acceptance speech. "I will forever be grateful to Eugene and Daniel Levy for the opportunity to play a woman of a certain age—my age—who gets to fully be her ridiculous self. They gathered the most fun-loving people in Toronto—cast and crew—and then by example led us all to be the best that we could be." O'Hara's win was then followed by Eugene Levy, who also won his first Emmy for best actor in a comedy series for his role as Johnny Rose. This was then followed by a series of awards for the show's co-creator and Eugene's son Dan Levy, for best writing, overall comedy series, and best directing awards. Annie Murphy and Daniel Levy also picked up awards for best-supporting actor and actresses awards for their roles as Alexis and David Rose.

🎵 and this will be our year 🎵 pic.twitter.com/rRBxaTJEBW

The cast took turns to speak after their awards from what O'Hara said was Eugene Levy's home back in Toronto. Giving an acceptance speech, Dan Levy said: "This has been the greatest experience of my life. This is completely overwhelming." The super hit TV show was part of the awards night on Sunday after having already won the costumes and casting accolades at the Creative Arts Emmy Awards a week ago, thus receiving 15 nominations overall. The show came second to Amazon's hit show The Marvelous Mrs. Maisel, which received 20 nominations in all.

Schitt’s Creek winning a record number of Emmys for a comedy show, as well as all four of the leads winning (which has never happened before!) is the best news I could ever imagine waking up to. I AM BEAMING pic.twitter.com/o2AAtTR7B5

Starting its TV run in 2015 on CBC, Canada, and Pop TV across the border, Schitt's Creek rose to fame quickly after Netflix added it to the collection in 2017. The storyline of the comedy takes place as the life of a formerly wealthy family who was bankrupted by a questionable business manager and then forced to move to a small town the father bought for his son as a joke. Although the series failed to receive any recognition for its first four seasons, it broke its duck in the fifth time of trying, receiving its first nominations last year, where it was nominated for four categories, including best comedy.

.@danjlevy's reaction to his dad winning best actor in a comedy series.... I'm not crying you're crying https://t.co/KRKe5VL4hh pic.twitter.com/1e8bvj0GZ3

The Emmys this year was forced to be held in isolation owing to the pandemic with all nominated actors and actresses appearing on live feeds from their respective homes, while the cast of the Canadian comedy seemed to be in one place to make for a joyous moment of celebration. People online wrote that the show got what was due and the sweep was thoroughly deserved. Patrick Strudwick added a unique observation via and tweet and called the show "revolutionary". He wrote:  "There’s something revolutionary about Schitt’s Creek that’s never mentioned: its creators made a decision not to depict homophobia. At all. It isn’t just about being inclusive, it’s starving hatred of oxygen. Those who attack LGBT ppl want attention to gain power. Deny them it."