A Sacramento State University economics professor and his seemingly drugged-up wife racially abuse their neighbor because of pork grease smell. 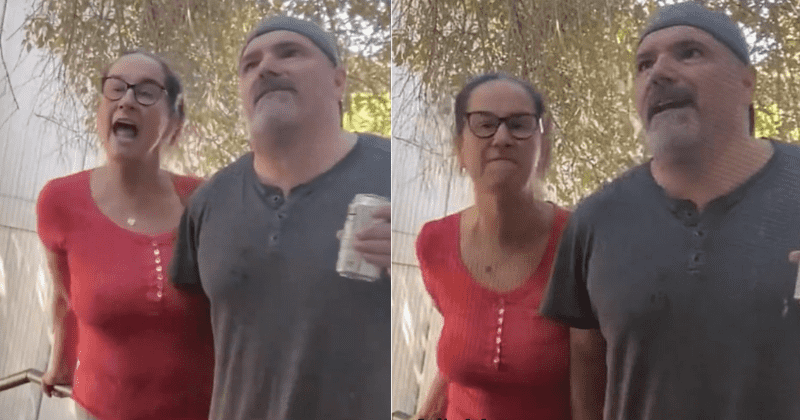 That racism is, unfortunately, an integral part of the American cultural fabric is an understatement. Instances of black people being shot to death by the police even for no visible fault of theirs has given way to #BlackLivesMatter and other similar rallies in the recent past. Just this year alone, we have seen multiple instances of racist transgressions, including the most recent case of Ahmaud Arbaury—a 25-year-old black man who was gunned down by two white men, Greg McMicheals and his son Travis, in broad daylight while he was jogging down a fairly empty street. And now, according to New York Post, another case of racism has engulfed the internet where a Sacramento State professor and his seemingly drugged-up wife were involved in an argument with their neighbors over the smell of pork grease.

My university system... and this is not shocking. California has a lot of covert racists.

In a video recorded by Mikaela Cobb which went viral on Reddit, economics professor Tim Ford, and his wife can be seen approaching their fellow tenant's window and the lady goes on to hurl the n-word multiple times in a drunken confrontation. "I’m a professor at Sac State, dude," Ford says in the video. "I have a Ph.D. I don’t need to be dealing with s— like this" while the wife goes on to state that she has a "Master's degree." Mikaela Cobb, the person receiving the abuse wrote in a now-deleted Facebook post, wrote: “This is what I have to deal with while in quarantine! Racial slurs are being thrown around, I can’t even (be) at peace in my own home."

Crystal, who appears to be heavily intoxicated, is heard repeatedly using the N-word towards Cobb and her boyfriend throughout the clip Sacramento State professor and his intoxicated wife in N-word rant https://t.co/k7RXRfh34A via @MailOnline

Continuing on why she got this unprompted drunken rambling, Cobb wrote: "Guys she was mad it smelled like bacon grease!? Like I can’t eat!?” The post which was made available on Reddit has seen over 2.5k upvotes and 500 comments so far and people have gone on to deride the couple's hostile behavior. The couple has since issued an apology via their lawyer, according to a report on Sacramento Bee.  “While we have had ongoing difficulties with one of our neighbors, there is no situation that warrants the use of racially charged words and we sincerely apologize for the behavior exhibited during this confrontation. I'd also like to apologize to everyone at Sac State, our friends, family, and the community at large and promise that something like this will never happen again." Talking about his wife, who clearly seemed to have a drug-related problem, Ford said that his wife “recognizes the hurt and anger that she has caused and regrets it" and further stated that "she is seeking help and has checked herself into a hospital for alcohol and drug abuse."

Nina Watkins, property manager for The Phoenix, said she disapproved of Ford’s actions. “We do not condone the behavior as witnessed in the video,” she said. Meanwhile, Ford hopes Cobb will accept his apology. “I’d be happy to sit down with her to help rectify the situation,” Ford said. Several people on Twitter, in support of Cobb, have condoned the professor and his wife's actions. A user Joe Wong, wrote: "Dear esteemed Sacramento State University @sacstate, Is this Tim Ford a professor at your school? What does he teach, racism by example 101?" Another user, Black Diaspora Voice, wrote: "We should not be surprised if a Sacramento professor and his wife using the N-word. Major universities have always practice medical apartheid and racism against black people in this country. And they will apologize and say we got black friends."

There is a video about a Sacramento State University professor and his wife using racial slurs against their neighbors, and he uses only his PhD to excuse himself from the argument. :(

Sacramento State President Robert Nelsen saw the video and condemned the pair's actions, saying that he was “deeply offended by the language” in an email response to State Hornet's queries. “I am deeply offended by the language in the video. Racial epithets are repulsive and unacceptable. Personally, I am incredibly upset by the contents of the video and the harmful impact that it is having on our campus community. We must embrace and honor our diversity. We must be strong together,” Nelsen elaborated in his statement. “We must continue to be a caring university, committed to eradicating bigotry, racism, and intolerance.”

@sacstate Sacramento state is my dream school! Unfortunately, after learning there are racist professors like Tim Ford.. I am terrified to study with someone who would hate me because of the color of my skin.