Sacramento ‘Karen’ Gets Punched In The Face After Using Racial Slur

No suspect has been identified, charged or arrested as of now, says Sacramento Sheriff's Dept. 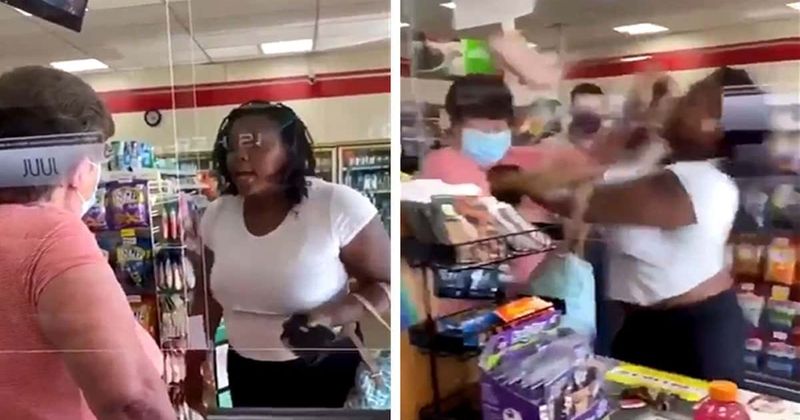 A video is doing the rounds on the Internet showing a Black woman punch a white woman in the face. The "Karen" in Sacramento called the woman the N-word and the two got into an altercation. It's unclear as to what started the argument. The white woman insisted she'd only said "excuse me"  but the Black woman heard something different, reports TMZ. And then things got extremely heated.

The Black woman dares the lady to call her the N-word one more time - saying she’d beat her up if she did so. The white woman took up the challenge and dropped the N-word.  The Black woman was then seen yelling at her and throwing in a few punches.

The funniest thing is my girl did not even put her purse down!

Shortly after, the Black woman walked out of the store as the white lady remained on the floor in distress.

Officials got a call about two women fighting at a 7-Eleven on June 22.  Members of the Sacramento Sheriff's Dept arrived on the scene but the Black woman had left by then. "Karen" was being treated to minor injuries. The injured woman reportedly admitted that it was a mutual fight. She took responsibility and didn't want to file a complaint then.  However, the next day, she called the cops and filed a report. As of now, The Sheriff's Office said that so far no suspect has been identified, charged, or arrested.

the white woman had no right to offend the black lady doing it once is bad but twice very offensive.

Twitter users reacted strongly to the video. SRxllins wrote: The N word is racist. A White woman using it towards a black woman does the context worse. Racism should be punished lol, glad the black woman gave her that punch, perfectly deserved. #BlackLivesMattters. diannewilliad felt both were wrong, tweeting: You go for it. We all know inately right form wrong. The name calling white woman knew it was wrong to use the n word but the black woman would also know it is wrong to punch anyone in the face. The Black woman however had way more supporters.

KirstieMichele said: Did you watch the video? The black woman walked past the Karen. Said excuse me. The Karen then proceeded to be rude. Karen used the “n” word. She got knocked the fuck out because when you use that word you’re looking for a fight. Well deserved punch to the face. aenzly added: i love to see it. racists getting what they deserve

It’s only over-used because there are too many Karen’s in the world.

The incident is similar to that of "Arizona Karen". We had reported previously that a white woman who was seen arguing in a gas station with a Hispanic woman. She started making racist comments towards her. The lady told the clerk not to serve the Hispanic woman, told her to go back to her country. Things escalated further after "Karen" got handsy with the Hispanic woman, who then slapped her square on the jaw. The racist woman was left stunned. She stormed out. The "Karen" was identified as  Tamara Harrian. Her husband Bob Harrian  reached out to the Hispanic woman, Karina, in an emotional message and has tearfully apologized for the “indefensible” slur — blaming it on mental illness, reports Fox 10.

"Karina, I don't know what to say. I'm just so sorry," Harrian said. "I'm just so sorry that this happened. You never walked into that store thinking something like this was going to happen. I understand, and I'm sorry. I'm sorry for what she said. It was very hateful. It was -- it's indefensible, but I just have to tell you this. It's her mental illness. A year ago, she would never done -- never have even thought of that."

Bob said that he tried getting his wife to get help but was never able to. Now he hopes that this unfortunate incident may be the wake-up call. “This is your spouse you have known and loved for 30 years and she is starting to slip away. And you are trying to get her help but you can’t get her help because she doesn’t think there is anything wrong with her,” he told 12 News in a separate interview.  Many online commended Karina for standing up for herself.