"You know, the standard robe is made for a man because it has a place for the shirt to show, and the tie," noted RBG in a 2009 interview, confessing this is why she wanted to include "something typical of a woman". 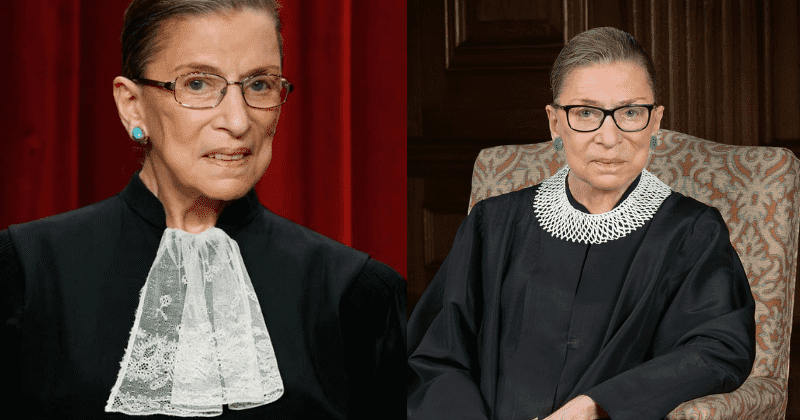 Unapologetic and classy is how one could define the late Ruth Bader Ginsburg, or as she is known, RBG. The liberal social and feminist icon was most known for a number of her progressive landmark judgments, whether it was the laws related to same-sex marriage or those surrounding abortion. She passed away last weekend, at the age of 87. However, her legacy lives on.  Not only is she known for her pathbreaking work, but she is also a revered cultural figure who made a fashion statement in her own subtle way.

There is not much you can do with a gown for the justices in the Supreme Court but even here, the "notorious" RBG saw an opportunity to make a statement. Over the years, her followers have taken note of varied and wide-ranging display of collars or jabots. Her collars have become so iconic that she donated one to the Museum of the Jewish People in Tel Aviv, Israel along with a signed copy of her autobiography. These collars, however, were not meant to be seen as simple fashion accessories but one that expressed a statement.

“The idea was to claim what was a traditionally male uniform and unapologetically feminize it,” our fashion critic @VVFriedman writes about Justice Ruth Bader Ginsburg’s collars. “That may seem innocuous, but it was in fact radical.” https://t.co/a3PQ6tXS7x

Speaking to The Washington Post in 2009 about how she started wearing the collars, she said, "You know, the standard robe is made for a man because it has a place for the shirt to show, and the tie. So Sandra Day O'Connor (Retired Justice) and I thought it would be appropriate if we included as part of our robe something typical of a woman. So I have many, many collars." And thus started Ginsburg collection of collars that would soon acquire wide fame among law and fashion aficionados alike. Each signified a different frame of mind and intent of the judge.

When Donald Trump became the president of the country, Ginsburg sported a collar that looks like it is adorned with ornaments. In an interview with Yahoo News Global Anchor, Katie Couric, she was asked why this particular one was her dissenting collar. RBG replied, "It looks fitting for dissent."

RBG: "This is my dissenting collar… It looks fitting for dissents." pic.twitter.com/luNmrN4BCX

Her favorite is perhaps the simple and white beaded jabot she got from Cape Town, South Africa. In the same interview with Couric, she explained that this collar is only one of two in her collection that she lays flat instead of hanging in a closet.

Another collar that Ginsburg sports often came from the New York Metropolitan Opera gift shop. It was a replica of the one worn by Spanish opera singer Plácido Domingo when he performed Giuseppe Verdi's opera "Stiffelio." Coincidently, Domingo performed for Ginsburg when she received Harvard's honorary law degree back in 2011, much to her surprise.

Then there was the gold embellished jabot to express a majority opinion. "When I'm announcing the opinion for the court, this is the collar I wear," she told Couric. It was given to her as a gift by her law clerks. She has worn the collar on many occasions and especially when, as Couric's stated, RBG really wanted "to make a statement."

US Supreme Court Justice Ruth Bader Ginsburg has a "majority" collar and a "dissenting" collar, among many others. Here's a guide to her (subtle) fashion statements: https://t.co/kVZtjHiUvW pic.twitter.com/cBvo3ESTeJ

For an official portrait that Ginsburg commissioned in 2002, she wore a lace and netted white collar which has made appearances in court over the years.

In 2015, one of her many fans chose to express their appreciation for the judge by making a collar for her. The fan later shared on Reddit that she had gotten a "thank you note" from Ginsburg. In the letter addressed to the fan who was referred to as "Ms. Havin", Ginsburg wrote, "The lace collar is elegant. I will wear it often, with an appreciation for your artistry and caring."

Replying to a comment by another Redditor about how she made the jabot, the RBG fan wrote, "I made it using this lace making method called tatting, which dates back to the early 19th century! Some knitting shops teach classes, but I'm sure are a million youtube tutorials and how-to books out there!"

According to The Washington Post, Marylou Luther,  The Fashion Group International creative director, once said about RBG and her collars, “For this woman who has championed women’s rights, it’s lovely to see that she’s championing ladies’ rights. It’s OK to be a lady. You don’t have to be a CEO in pantsuits.”