Runner Loses Race On Purpose, Guides Opponent To Victory After He Mistook The Finish Line

Iván Fernández, who wanted to do right by his competitor, demonstrated the importance of being an empathetic human. 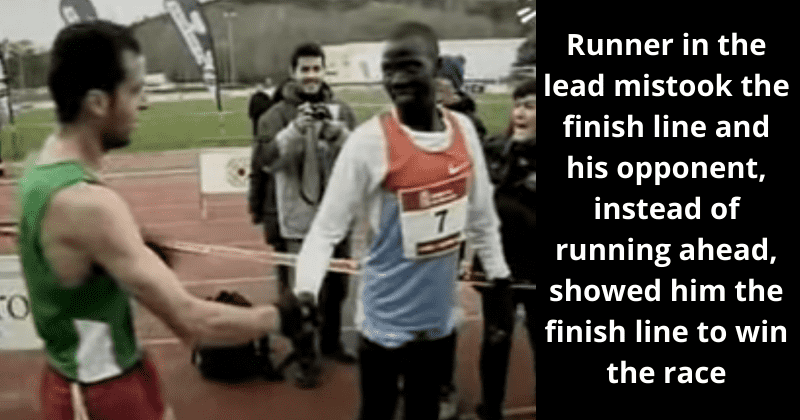 Sportspersons are conditioned to compete with ferocity because that's what drives them to the very top of their profession. They feed off of competition, constantly searching for new ways to get an edge on their opponents and capitalizing on the chances they are presented with. This, however, is the story of Iván Fernández Anaya, a Spanish athlete who refused to take a chance that presented itself before him because he considered it dishonorable, reported El Pais.

The incident occurred in 2012 when Kenyan runner Abel Mutai was leading a cross-country race in Burlada, Navarre. Hot on his chase, in second place, was Spanish athlete Iván Fernández Anaya. It was a tight finish with Fernández pushing Abel Mutai all the way. As the duo entered the final straight of the race, Abel Mutai slowed down. Mutai came to near halt 10 meters prior to the end because he was slightly confused by the signs and assumed the race had been completed. Fernández caught up with Mutai but realized that the Kenyan had mistaken the ending of the race. Fernández could have chosen to exploit Abel Mutai's mistake, but he chose to push Mutai to the finish line, explaining that the race wasn't over.

Mutai realized his mistake and crossed the actual finish line, with Fernández maintaining a respectable distance to ensure he finished second. The first thing Mutai did after crossing the finish, was to turn around and thank Fernández for the sportsmanship he exhibited at such a crucial juncture. In the world of athletics, fine margins can make or break careers. Abel Kiprop Mutai would go on to win the bronze medal in the 3,000-meter steeplechase at the London Olympics.

The athlete's coach, Martín Fiz, was proud of his disciple. Fiz, a long-distance who knows well the competitive nature of sports said he wouldn't have done the same. “It was a very good gesture of honesty,” said Fiz. “A gesture of the kind that isn’t made anymore. Or rather, of the kind that has never been made. A gesture that I myself wouldn’t have made. I certainly would have taken advantage of it to win. I wouldn’t have done it. I would have taken advantage of the mistake to win.” Fiz added that the gesture made him a better person and not a better athlete. "He has wasted an occasion. Winning always makes you more of an athlete. You have to go out to win,” said Fiz, highlighting the competitive nature of the sport.

However, Fernández has no regrets. He knows he did the right thing. “My dream is that someday we can have a kind of community life,” he answered. When pressed by journalists on why he didn't capitalize on Mutai's mistake, Fernández gave an answer embodies what true sportsmanship is about. "What would be the merit of my victory? What would be the honor of that medal? What would my Mom think of that?” The journalists had no more questions. One can imagine Fernández's mother breaking into a smile on hearing her son's words. What more can a mother teach, than for their children to be empathetic to other human beings?

#WBW (Navarra, Spain): In late 2012, Kenyan runner Abel Mutai was leading the cross country race but stopped 10 meters short thinking he’d crossed the line. The runner behind him, Spaniard Ivan Fernandez, pointed to the line so the Kenyan runner could claim his #1 spot. When asked by reporters, “Why did you let the Kenyan win?" Ivan replied, "I didn't let him win, he was going to win". The journalist insisted again, "But you could have won!" Ivan looked at him & replied, "But what would be the merit of my victory? What would be the honour of that medal? What would my Mom think of that?" ❤️💯 🏆 campeones los dos 🏆