Rubble, The World's 'Oldest Cat' Dies At 31-Years: "He Was An Amazing Companion"

The cat's owner Michele Heritage had gotten Rubble as a kitten when she was in her 20s. Heritage is now 52-years-old. 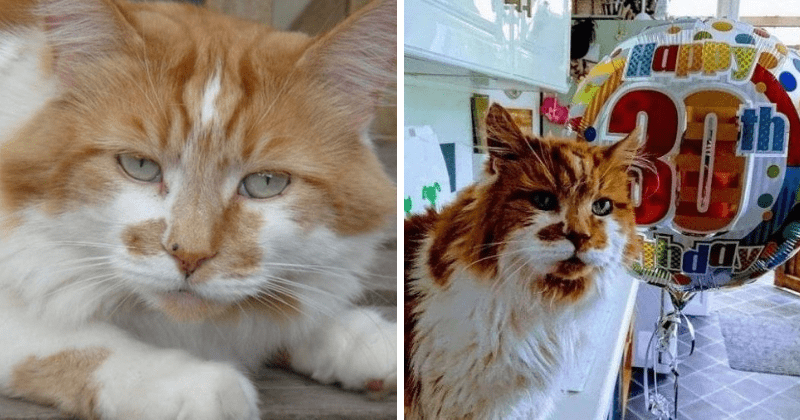 Having pets can mean the world to many people and it's never an easy moment, day, month, or year when they pass away. It's an inevitable part of life and yet it's so hard on us all. Thankfully (or not), some cats tend to leave their house and die elsewhere after having lived a happy life so that their owners would never get to see them dead. Dogs, however, stick on till their last breath, and if you've known anyone to have lost one to old age, you know that they remain in their hearts forever.

Thirty-one-year-old Rubble, a cat from Exeter, England was believed to be the oldest living cat in the world. He recently passed away after being the equivalent to about 150 years in human age. According to MSN, his owner Michele Heritage confirmed the news and spoke to South West News Service saying that Rubble died just before reaching a milestone 32nd birthday. "He was an amazing companion that I had the pleasure to live with for such a long time," said Heritage. Rubble was gifted to her as a kitten for her 20th birthday. "He was part of a litter of cats that my sister's friend had and I had just left home. I was lonely living on my own, so I got him in as a kitten."

The oldest living cat Rubble has passed away at 31.

Rubble and his owner Michele were inseparable. His age equaled 150 in human years. pic.twitter.com/yRWHKVfOsF

One of the main reasons which the 52-year-old Heritage credited for the fluffy Maine Coon cat's long life was her expert pet parenting. She took care of Rubble as if he were her own son. "I have always treated him like a child," she explained. "I don't have any children and had another cat called Meg, who passed at the age of 25. If you care about something, no matter what it is, it does last."

However, Rubble's final days were not pleasant as Heritage said that the animal began to deteriorate "very quickly toward the end". It is quite a remarkable achievement for Rubble to last over 30.  Indoor cats generally reach up to 12-18 years of age. Many may live to be in their early 20s. Outdoor or stray cats generally live shorter lives due to being more likely to be either attacked by dogs or involved in motor vehicle accidents.

"I said to my husband at Christmas that I think it would be last we spend with Rubble. He had started to stop eating and only drank water," Heritage said. "He became very thin. I went to work as usual, and when I got home my husband said Rubble had gone over the road as he did every day and never came back, so we believe he went off to die as cats do."

"He was a creature of habit," she added, "[he] had his favorite places to sleep and liked his food, so when that stopped happening, we knew."

Rubble's 30th birthday was celebrated to much pomp and joy back in 2018. Heritage fawned over him, calling him lovely and saying that he was known to be a bit grumpy at times as well.  “He’s a lovely cat, although he has got a little grumpy in his old age,” she said at the time. “He has plenty of life left in him yet, but I don’t think we will go down the Guinness World Record route as I am not sure he would like lots of people coming to see him or a fuss being made out of him.”

“He is old now,” the owner added, “and would not like too much attention or be hassled. We would prefer it if he was just left to live out his old age in peace.”