trending celebrity people lifestyle news animals
Have You Ever Seen Rosefinches? The Little Birds Have A Gorgeous Plumage And Melodious Voice

Have You Ever Seen Rosefinches? The Little Birds Have A Gorgeous Plumage And Melodious Voice

Rosefinches are commonly found in Eurasia and Americas. They are over 20 species of them with their colorful plumage 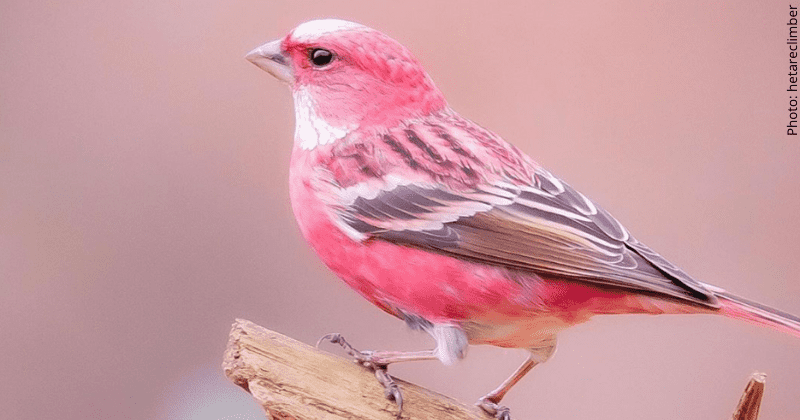 The Rosefinch is a spectacular looking little bird. It's best known for its red and pink plumage. It comes from the passerine birds in the finch family Fringillida. There are two genera — Carpodacus and Haemorhous. The former is commonly found in Europe and Asia, while the latter is found in the North American continent. There are three species of birds found in the Haemorhous genus namely the Cassin's finch found in western North America, New Mexico, Arizona, and southern California; the House finch can be spotted from Oaxaca, Mexico to southern Canada and the third variety is the Purple finch, native to Canada and the northeastern US.

The genus Carpodacus contains 27 species. These sparrow-sized birds are about 15 cm (6 inches) long. Like peacocks, it's the males that have these varied hues of red and pink on them. According to Britannica, males are red on the head, breast, and rump. Females are said to have streaked brown heads.  In addition, "some have a single, or solid, coloration. Others have speckles, mottling, or patches of other colors. The different colorations that you can find on these birds include black, white, yellow, brown, red, gray, blue, and more," as per this website.

The Carpodacus rosefinches occur throughout Eurasia, but the greatest diversity is found in the Sino-Himalayas lead one to believe that the species originated in this region. As for their diet, many feed mostly on seeds and grains, but other species are omnivores and feed on insects, invertebrates, and plants.  Their melody said to be a three-note, is also sweet and pleasing to the ears.

Now, that we know a bit about these birds, let's take a look at some of these gorgeous pictures.

One of the undoubted highlights from a few days in #Georgia last week was Great Rosefinch - what a stunning bird! #birds #birding pic.twitter.com/zEpmFCTdKt

My beautiful cousin! ---> Rosefinch bird in the snow 🐦❄️ pic.twitter.com/HaTjv8lRVI

Red sky at night; shepherds delight,
Red bird in the bins; it’s time for a cuppa.

If you hear them, they are there. All you gotta do is be patient and focus on your surroundings.

Birds don't expose themselves easily when they feel human presence, specially those birds that are found on such high elevations.

Male vs Female. Who's beautiful?

In the world of #birds most of the male species are colorful compared to their female partner.

New birds this afternoon at Sumburgh: Yellow-browed, Rosefinch, Gropper and a tame RB Fly at the Head @NatureInShet pic.twitter.com/cyXrgvgMiF