trending celebrity people lifestyle news animals
Rory Feek Says Daughter With Down Syndrome Is Like Any Other Child: 'God Does Not Make Mistakes'

Rory Feek Says Daughter With Down Syndrome Is Like Any Other Child: 'God Does Not Make Mistakes'

The proud father sees his daughter as a beautiful, sweet, and loving child and "not less." 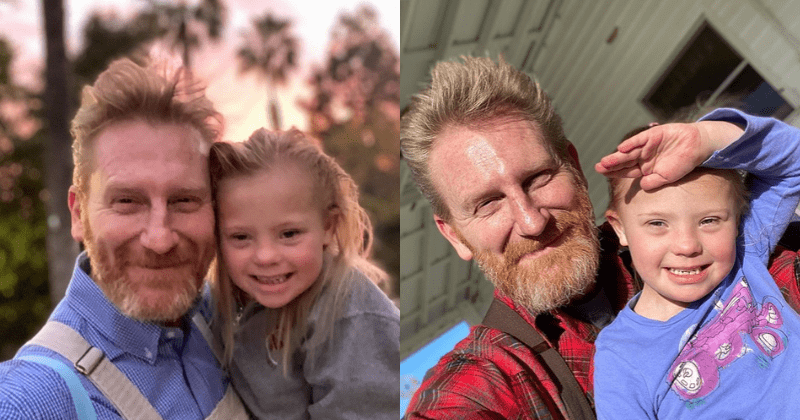 Back in 2014, Rory Feek and his wife Joey of Joey + Rory fame decided to move away from the limelight and prepare for their baby that was on the way. Their daughter Indiana was diagnosed with Down syndrome when she was a few days old. A few months later, Joey was diagnosed with cervical cancer before tragically passing away, leaving Feek to raise their little daughter on his own.

Feek knew that he would have to work towards overcoming unique challenges that a child with disabilities would face. Still, the songwriter does not feel that it's all that defines his daughter, and opened up about how it has been an unexpected experience thus far. "It is completely different than what I expected. The books and blogs I first read right after Indy was born and the advice I received all seemed to say ‘this child is going to be completely different’ and ‘set your expectations very, very low’ and things like that to prepare Joey and I for a child with a much lower IQ and abilities," he shared, according to Medium.

"That hasn’t been the case at all. She’s incredibly smart and thoughtful and normal." Feek shared that raising Indiana has been almost the same as raising his older daughters, Heidi and Hopie, 25 years ago. "Other than the fact that her little almond eyes are different and she has small braces inside her shoes and is four and can’t walk up and down stairs yet, she’s very typical. Probably because we don’t see her as a child with Down syndrome, we just see her as a child," he shared.

Not only that, Feek absolutely insisted that he doesn't see himself as a dad raising a child with a disability. Rather, he perceives himself as one raising a child because her Down syndrome is not "a thing that is part of our lives, and even more so, a part of hers so far," he explained. He explained in one of his blog posts just how much society has conditioned us all to feel pitiful towards parents who "didn't get a regular baby' as if they got "something less... a burden that will last a lifetime." But the country crooner affirmed that this view is absolutely wrong and that "God doesn't make mistakes." He added, "Indiana is not less than any other child.  Different is not less.  Having down-syndrome doesn't make her life any less meaningful than someone else's or her dreams or feelings any less important.  Not as a child and I suspect, not in the years to come when she grows to be an adult."

"Like typical kids, they come in all shapes and sizes. Some learn faster, some slower. Some are silent and some vocal. Some crawl and walk earlier than others and some, like Indy...take their time. But they are all beautiful. All gifts from heaven above," he continued. Then he revealed a heartbreaking statistic: "70 - 90% of pregnant mothers that get tested and learn that their unborn child has down-syndrome abort the baby." Feek went on to explain that he understood the emotion behind it as the world has been telling everyone that "they are less" or that they are a mistake, but that's definitely not what Feek considers his darling Indiana to be.

"I can not imagine Joey not having those two years to be a mama to Indiana and get to experience the love and happiness that Indy brought to her.  God knew that.  He made it so.  It was His gift to her.  Like Indy is my gift now.  She is the smile on the face of a father who should be crying.  She is the joy in the life of a family that should be filled with sadness," he added. Now, Indy is 6-year-old and her proud father cannot stop adoring his baby girl. "I used to look at Joey and think, 'How in the world did I get this lucky?' This morning Indy climbed in bed with me and she was ready to get up and I was not ready to get up yet. I just held her and the sun was coming in and she fell sound asleep. By then I’m wide awake and I just looked at her and I thought, 'How in the world did I get so lucky to be with such a pretty, sweet, wonderful little one?'" he told PEOPLE.