The academy award-winning actor passed away on August 11, 2014, while suffering from Lewy body dementia. 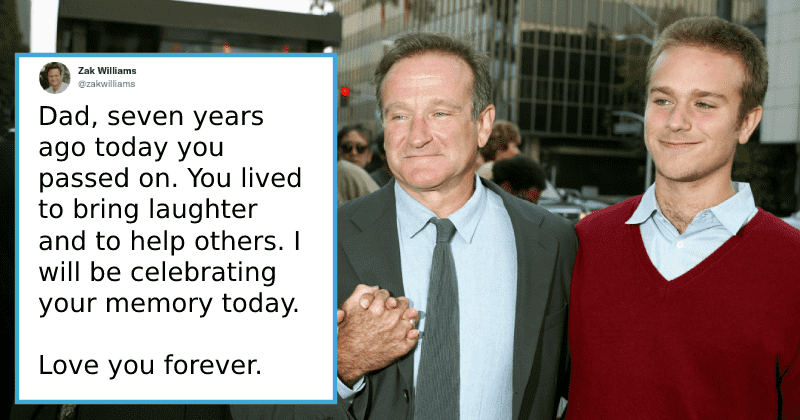 Trigger warning: This story contains themes about suicide that some readers may find distressing

It's been seven years since we lost Robin Williams, one of the greatest comedic actors of all time. The Oscar-winning actor passed away at the age of 63 and his void is still felt today by fans, colleagues, and loved ones. For Zak Williams, the actor's son, it was a far greater loss. Zak Williams remembered his father on his death anniversary with a touching post. “Dad, seven years ago today you passed on,” he tweeted along with a photo of his father, reported TODAY. “The joy and inspiration you brought to the world carries on in your legacy and in your family, friends, and fans you so loved. You lived to bring laughter and to help others. I will be celebrating your memory today. Love you forever.”

Dad, seven years ago today you passed on. The joy and inspiration you brought to the world carries on in your legacy and in your family, friends, and fans you so loved. You lived to bring laughter and to help others. I will be celebrating your memory today. Love you forever. pic.twitter.com/xw2pkO4shZ

Zak also paid tribute to his father weeks earlier on what would have Robin Williams' 70th birthday on July 21. One of Robin Williams' greatest traits was his ability to connect with people through his work, interviews, or in person. Zak Williams wrote: "Dad, on what would be your 70th birthday, I would want you to know that your incredible spirit lives within us. Our family will be celebrating you and your memory today. We miss you and love you always!"

Today would be 70. Missing you especially much today. Love you always evermore. pic.twitter.com/Evc7uW48eS

Robin Willaims died by suicide while suffering from Lewy body dementia on August 11, 2014. Zak Williams, who's a mental health advocate himself, has spoken about how deeply his father's death affected him. "I found myself extremely emotionally disregulated and feeling vulnerable and exposed when I wasn't ready to be vulnerable," he said in an interview with Oprah Winfrey and Prince Harry for Apple TV’s The Me You Can’t See. "And that created a major challenge for me." Zak said it was harder to grieve his father's death because he was known and loved world over. "From my end, I didn't get a chance to focus on the private grieving process until about a year and a half after my dad passed away...” he added.

In the 1990's, Robin and his friend, Whoopi Goldberg, testified before the US Senate, asking them to end the homelessness crisis.

"You can't keep picking people up. You have to stop them from falling."

It's one of the most powerful speeches you'll see.pic.twitter.com/f3PIfHbchF

Zak is also introducing his 2-year-old son McLaurin Clement to his father's work. "I have slowly started showing photos and pictures to my son, things from movies and in animation that my dad was in," said Zak. "We have photos and memories around our home and he's drawn to them. And so when he sees the Genie from 'Aladdin' or when he sees a photo of his grandfather, he's drawn to it. And so we talk about it ... It's a nice way to carry on my dad's legacy related to our family history."

Missing you so much today Dad. To all those out there who won’t be spending Father’s Day with their dads, or might not have had one present in their life, my heart goes out to you. Happy Father’s Day. pic.twitter.com/6tTCKamIMV

If you are having thoughts about taking your own life, or know of anyone who is, please contact The National Suicide Prevention Lifeline at 1-800-SUICIDE (784-2433)