trending celebrity people lifestyle news animals
Robin Williams' Daughter Gets Sign That Her Dad Is Still Watching Over Her, Gets Genie On Viral Disney Filter

Robin Williams' Daughter Gets Sign That Her Dad Is Still Watching Over Her, Gets Genie On Viral Disney Filter

When the 30-year-old Zelda too jumped on the bandwagon and tried her hand at the popular Disney Instagram filter, she was in for a special surprise. 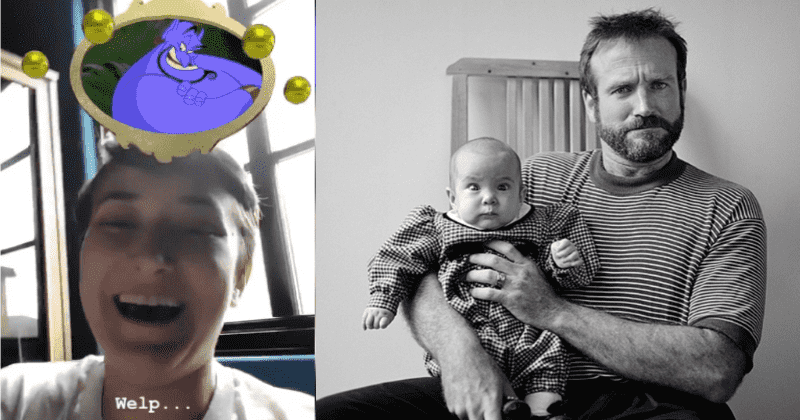 Grab a tissue, folks, because this one is going to get pretty emotional. The world lost the legendary Robin Williams almost 6 years ago and his absence is felt by his loved ones and fans even to this day. While the popular star's death was a huge shock to everyone who's seen him on screen or had the good fortune to personally interact with him while he was alive, no one experienced the true extent of the loss as his beloved wife and children have. His sons Cody and Zak and daughter Zelda have time and again honored their late father in their own special ways and as 2019 came to an end, Zelda was treated to a heartwarming sign that her dad is still watching over her.

A new Disney-themed Instagram filter caught the internet by storm this past week with many netizens testing it out to see which popular animated character they get. The 30-year-old Zelda too jumped on the bandwagon and tried her hand at the filter and was in for a special surprise. She took to Twitter earlier this week to post the heartwarming result and Twitterati practically wept at the significance of the character she was assigned.

According to Comic Book—the popular filter that was designed by Arno Partissimo—scans the user’s face and lands on a character from Disney's expansive range of beloved characters. Although it is similar to a random number generator, the results of the filter have been quite entertaining for Internet users. However, no one came close to Zelda's magical results as she landed on the Genie from Aladdin—the character voiced by her talented father in the 1992 animated film. Since sharing her results on Twitter, her tweet has gained over 131k likes and retweeted almost 23k times.

In the video, Zelda is seen laughing out loud as the filter flicks through a load of characters to land on Williams' beloved character. Her reaction warmed the hearts of Twitter users who couldn't help but comment on the significance of her result. "You're not the first person whose parents give you signs that they are watching you my dad is a similar thing he lets my family know he is watching us by leaving white feathers behind and his favorite number seen randomly," tweeted ‏@Justin58170235.

As it should be pic.twitter.com/IUEutJTblh

@jsmith070393 tweeted, "What are the chances? I like to imagine that was your dad's doing, making you laugh to this day!" @BaconLordBear added, "The genie doesn't fall far from the lamp, kiddo." Meanwhile, @ADofCLE tweeted, "I’ve never took a celebrity passing, more than Robin Williams, himself. The man brought so much joy to my life, and I didn’t even know the guy!" Is this the sweetest thing ever or what?!