Kate Lyon Osher recalls the time the actor took a moment of his busy schedule to comfort her during a moment of grief. 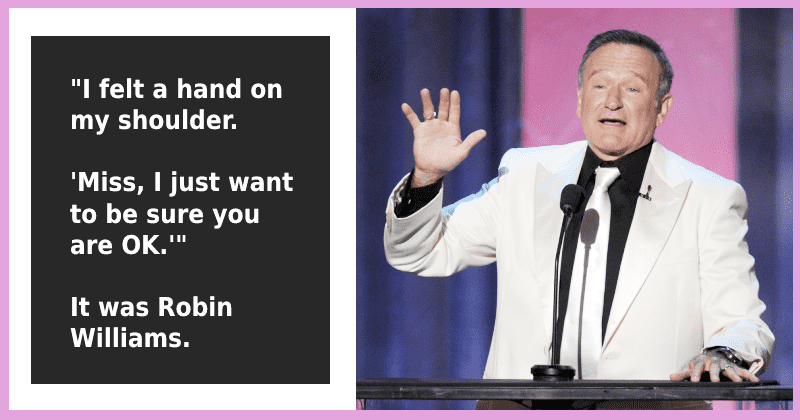 Trigger Warning: This story contains details of suicide that readers may find disturbing

It's been more than seven years since actor Robin Williams died by suicide in 2014. The messages of tributes to the comedic genius even seven years speak volumes about the space he held in people's hearts. While there's no doubting the caliber of Robin Williams' acting, it was his humanity that really cut across the people. There's no end to the stories of Robin Williams helping people and speaking up for the voiceless. Kate Lyon Osher was one of them who experienced his kindness first hand. She recalled meeting the actor at the Los Angeles airport. She had just lost her husband to suicide and struggling to get back on her feet at the time.

"After my first husband Greg died by suicide, I went on a travel quest of sorts, scattering his ashes where he requested and trying to piece my life and my soul back together as best I could," she wrote in The Huffington Post. It was post 9/11 and security was beefed up. Something seemingly simple as getting your late husband’s ashes through TSA security felt like a nightmare. She was hauled up by an agent "with a power trip like no other." The agent asked her to toss the ashes and she was "going ballistic and falling into hysterics." Another cop had to step in to help her.

Today would be 70. Missing you especially much today. Love you always evermore. pic.twitter.com/Evc7uW48eS

She was a complete mess by now and found herself crying at the airport bar. "I sat in a corner table facing the wall so no one could see how hysterical I was, with my whiskey on the rocks providing support, and I felt a hand on my shoulder. A soft voice stated, 'Miss, I just want to be sure you are OK. I see you are traveling alone, and I saw what happened, and I just really want to be sure you are OK.'” As she turned out, she couldn't believe it. It was Robin Williams, taking time out of his busy schedule to check in on her. "I was still crying that ugly cry where you are trying to catch your breath, and I gave him the Cliff Notes version of circumstances. His eyes got a little glossy. His voice got softer. And he said to me, “Addiction is a real b*tch. Mental illness and depression are the mother of all b*tches. I am so sorry for all the pain your husband was in. I’m so sorry for the pain you are in now. But it sounds like you have family and friends and love. And that tips the scale a bit, right?”' she recalled.

Robin was once in a coffee shop in San Francisco at 230am, when he saw a man who was depressed.

The man had just lost his parents.

Robin walked over, sat next to him, and made him laugh. pic.twitter.com/Nf6id96fD8

He then walked her to the gate. It was a moment of kindness that sustained her and helped her get back on her feet. It hit her hard when she heard the news about his death. She recalled him with much kindness. "He was a gentle soul. He made us laugh, and he made us cry. He made us feel with his craft. He was honest about his demons. He was open about his mistakes and his faults. He was obviously in pain," she wrote. "Mental illness and severe depression are the mother of all b*tches. Damn straight."

Robin was once in a coffee shop in San Francisco at 230am, when he saw a man who was depressed.

The man had just lost his parents.

Robin walked over, sat next to him, and made him laugh. pic.twitter.com/Nf6id96fD8

She recalled him walked her to the gate, making fun of TSA agents, especially the one that harassed her. "He told me I had a wonderful laugh. A beautiful smile. And when we parted ways, he hugged me. With his famously hairy arms, he gave me a huge, warm, bear hug, and it sustained me," she wrote. "That moment saved me."