Robert Irwin can be seen wearing the signature Irwin khaki shirt, holding a koala and he looks like a carbon copy of his late father. 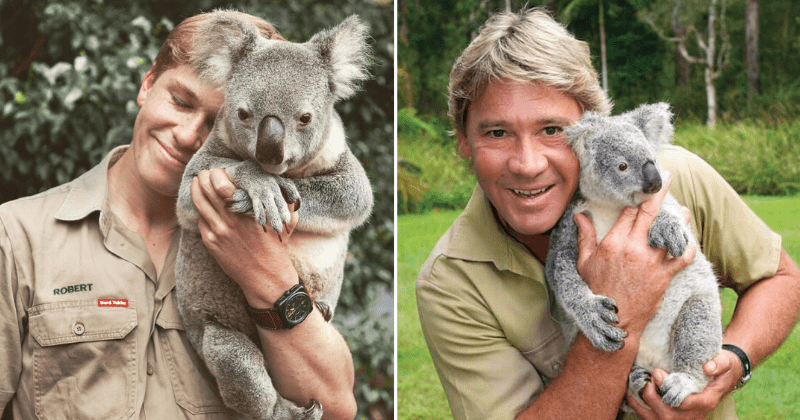 Robert Irwin is the 16-year-old son of late Steve Irwin. The "Crocodile Hunter" tragically passed away in 2006 after accidentally getting stung in the chest by a stingray. Robert was only three when his father passed away. Now, after 13 years of Steve's passing, the teenager looks like a spitting image of his father. In a recent picture that Robert uploaded on his Instagram, he is seen cuddling a koala, recreating one of his father's iconic pictures with the same pose. People were quick to notice how much he looks like his father in the 2000s.

The picture was taken at the Australia Zoo and Robert is wearing the signature Irwin khaki shirt. A lot of people commented on the post pointing out how similar he looked to his father. "You have never looked more like your father than you do in this picture. And your smile radiates that," a user commented. Another added, "U look exactly like ur father in this photo and u probably get that a lot." One user who mistook the person in the picture said, "Didn't look at the name on the shirt and honest to god thought I was looking at Steve." Another user shared, "Oh you look like your dad so much here! I had to take a second look!"

This isn't the first time Robert has been a mirror image of his dad. He has shared instances on his Instagram where if one didn't know any better, they would just think they were seeing double. The award-winning wildlife photographer shared a picture of him and his father side-by-side with the caption, "Dad and me feeding Murray... same place, same croc - two photos 15 years apart." Similarly, he shared another picture of him and his father which was taken when they were the same age. In the caption, he said, "The first time I saw it, I actually thought it was a photo of me... It really makes me think about what’s ahead in life and all of the adventures yet to come. I look forward to following in Dad’s footsteps and carrying on his mission and legacy."

The teen has been truly following in his father's footsteps and now, along with his mother and sister, has been taking care of the Australia Zoo after the passing of Steve Irwin. During the Australian bushfire crisis, the zoo hospital saved over 90,000 animals injured in the fires. Earlier in January when the fires subsided a bit, Robert took to Instagram and said, "Thankfully, our 451,000 acres of protected wildlife habitat are safe from the bushfires at the moment and are acting as refuges for thousands of endemic species." He added, "But sadly, in other areas of Australia, millions of acres have been destroyed. My heart goes out all who have been affected by this crisis, and the firefighters who are working tirelessly to protect our country."