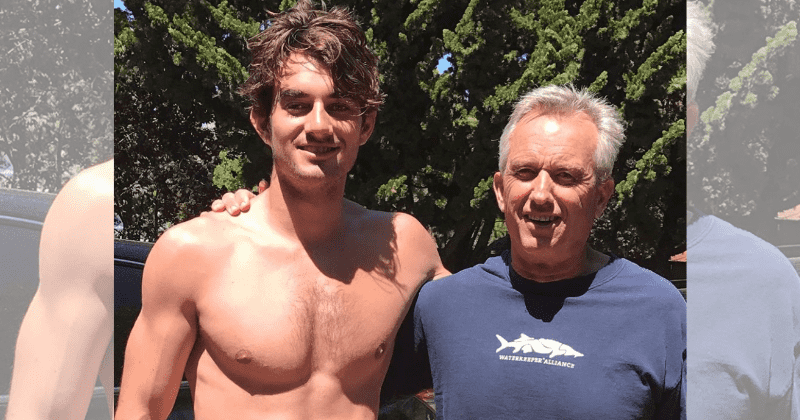 Robert F. Kennedy Jr., the nephew of former U.S. President John F. Kennedy, has honored his son Conor on his 26th birthday. Kennedy, 66, an environmental lawyer shared a series of photos on his Instagram, which showed a glimpse of his life in pictures through the years. "Happy Birthday, Conor!" RFK Jr. wrote in the caption, alongside a hashtag of Conor's Instagram handle, reports People. In some of the pictures, he can be seen alone as well as along with members of the Kennedy family from gatherings. Also seen on the pictures, included his sister Kyra, brother Aidan, and niece Bobby. The series RFK Jr. shared also included a photo from 2013 when Conor was getting arrested along with 47 people for civil disobedience during a protest outside of the White House against a tar sands pipeline by Keystone XL. Other people to get arrested on the occasion included Sierra Club director Michael Brune and actress Daryl Hannah.

The post has received over 23k likes with many continuing to wish him a happy birthday while some pointed out to specific photos from the series. Pointing out to the picture of his arrest, Runningwithwolves3 wrote: "lol.. anyone know why he’s getting arrested in that one photo?" while Woodycreekphoto wrote: "Love that old aspen jacket during arrest in from of White House! Proud moment." Quite a few of Conor's admirers also took their chance to make themselves heard. One follower commented asking RFK Jr.: "Does Conor have a strong, nurturing girlfriend by his side to throw a nice cashmere blanket over his exhausted body, cook him some homemade tacos and pour him a proper Godfather late night (or wee hours of the morning) after bail?" The good sport of a father sent a cheeky response and said he'll ask and let her know.

One particular user, who seemed to go through all the pictures and liked what they got to see, questioned: "Why are all of the Kennedy’s so good looking?" as another user elaborated on it and wrote: "You fellers are all handsome and strapping but that little Bobcat just makes my heart burst. What an absolutely gorgeous little fairy." Another user paid tribute to the entire Kennedy household and said: "Love the Kennedys. Sweet and the most woke and humanitarian family to ever lead this country." RFK Jr. has been fighting against pharmaceutical companies against an HPV vaccine which has reportedly caused cancer in a few Australian women, as per The Daily Beast. The report states that RFK Jr. cited an Australian research and said girls who are taking the HPV drug, Gardasil, are now suffering from cervical cancer. When asked what he thinks about the pharma companies' race to come up with a Coronavirus vaccine and if it is worth it during a Fiveaa interview, he said: "I’m not an anti-vaxxer. I just want safe vaccines.  There is corruption in these companies.”

He also commented on the state of the current U.S. politics and said his dad and uncle would be rolling in their graves if they happened to see that is happening in the country at the moment.

Conor Kennedy is looking so hot in these new photos that his dad, Robert F. Kennedy Jr., posted to celebrate his 26th birthday https://t.co/25wqxZyReC