"I was wearing a mask, one approved by my boss. I was doing everything in my power to provide SAFE service to my customers," the employee wrote 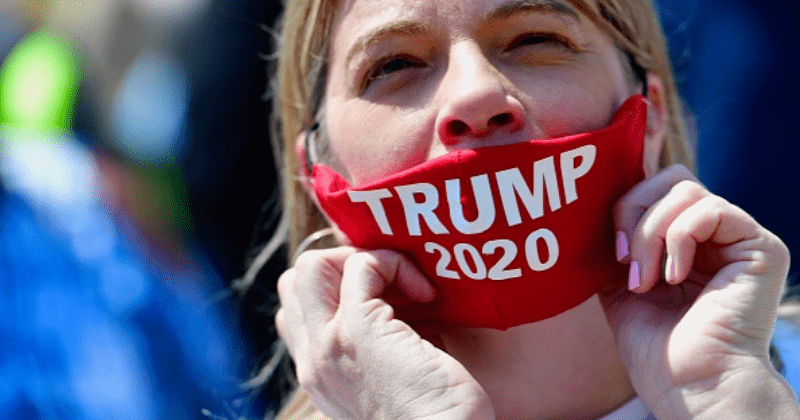 Kris Hauser has been working as a server at the Village Inn in Farmersville for two years. She took to Facebook earlier this month to write that she was terminated from her workplace for refusing to wear a "Trump 2020" face mask, even though she was otherwise good at her job. Servers in restaurants have been deemed as essential workers. Restaurants were given official clearance from Ohio governor Mike DeWine to start indoor dining with reduced capacity in late May, reported Vice. A part of this deal was that the employees would wear face masks and follow social distancing guidelines to ensure safety.

On June 4th, I returned to work for my first shift since reopening from the Covid-19 pandemic. When I arrived I was wearing a surgical face mask. My boss came up to me and told me she had a face mask for me. She then presented me with a mask with the words 'Trump 2020' printed on the front, Hauser wrote in the now-viral Facebook post. First, I asked my boss if I could wear the mask inside out, in which she told me yes and proceeded to say 'Well you can’t be for Biden.' I then responded that I wasn’t for anyone and didn’t think it was appropriate. She then went onto clarify if she could wear her own mask from home if the provided mask was dirty from a shift the day before, to which her boss gave her approval.

This conversation was overheard by two other employees who added to the conversation that that would make things easier for them as well, for they also had multiple masks of their own at home. For the remainder of my shift, I wore the 'Trump 2020 mask inside out, Hauser continued. The next day, I arrived wearing a surgical mask. Out of the three waitresses and one bartender, three of us were wearing a mask from home and one was wearing her 'Trump 2020' mask inside out. Approximately 45 minutes after the beginning of my shift the owner approached the bartender and told her she needed to switch into her 'Trump 2020' mask.

lol of course this was SW Ohio https://t.co/PxdZcuEhOo

When Hauser overheard this conversation, she informed the owner that their boss had given them permission to wear their own masks. The owner then approached our boss to confirm, in which the boss denied ever giving permission. The owner then approached me again and stated I needed to wear my Trump 2020 mask. I responded and told him I would wear it, but I would wear it inside out (which a majority of employees had been doing already for the days prior), she said. The owner, Scott, told me 'No, you will wear it with Trump 2020 facing out for people to see.' I told him I would not do this and he said that I needed to leave.

You cannot force your political beliefs on anyone! Requiring face coverings is one thing, making you make a political statement you don’t believe in is quite another. I would wear a face covering of my choosing unless they provided appropriate coverings!

Hauser then told him that it was a pleasure working for him, clocked out, and left. I was wearing a mask, one approved by my boss. I was doing everything in my power to provide SAFE service to my customers. I decided to stay neutral in my place of work and was penalized for it. I have my state educator license and have a goal to teach in the school district in which this restaurant is located. To me, this is the biggest reason I found it inappropriate. According to WHIO, she may now sue her former employer. She is being represented by Jason Matthews, a lawyer who specializes in employment law.

You are paid to represent a company, not your personal stance on politics - which should apply to all types of political messages, or none.

"There is an Ohio statute, it’s Ohio Revised Code, Section 3599.05 which addresses employers coercing employees into engaging in political activity," Matthews said and clarified that the first amendment only applied to public sector workplaces but this section would come in handy for the current situation. "Our next step is to contact that employer to see if something can be worked out and to compensate Kristen for damages she’s incurred and hopefully to protect other employees from being subjected to similar treatment," he added.

You can support Hauser financially here.

Hopefully she'll win her case and receive damage compensation from the Village Inn in Farmersville, Ohio.