The tragic sight was witnessed by the boy's aunt as his clothing and body parts were found inside the crocodile. 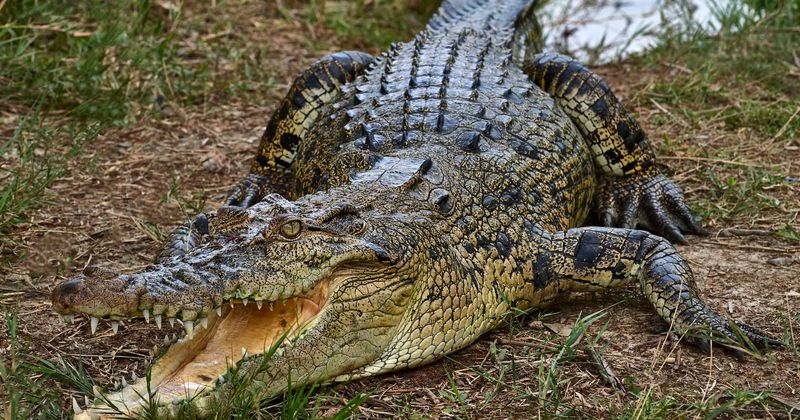 Trigger warning: This report contains details of an animal attack that readers may find disturbing

A teenager, who was dragged off the river by a crocodile, has been found dead six days later. His remains were discovered inside the body of the crocodile which snatched it in Rumah Dadat, Tanjung Manis, Malaysia. The victim was a 14-year-old boy named Ricky Genya who was looking for snails near the river when he was attacked. Witnesses saw him being dragged underwater as the massive reptile leaped from the water and clamped its jaws around his foot, The Sun reports. Crocodiles preying on humans, especially children, is uncommon yet not unheard of in this region of the world.

The boy was immediately reported missing to local authorities and search and rescue teams were dispatched. They found the 15 feet-long saltwater crocodile around two miles from the jetty where the boy was last seen. The incident took place on July 26 and the boy's family had filed a missing person report. But it was of little consequence as the boy's aunt said she had seen the reptile dragging him into the water, something that almost always results in the death of a crocodile's prey. The crocodile was eventually captured to obtain evidence on July 31 and was cut open in front of the teenagers' family and the police.

The Sarawak Fire and Rescue Operations sent an officer who found some clothing and "several parts of a human body" inside the animal. According to the outlet, local reports stated that search and rescue teams made use of a chicken as bait to catch the maneater. The body parts removed from the animal's stomach have been sent for an autopsy and the remains will be taken home by the family to arrange a proper funeral in their village. ''The crocodile was pulled onto the shore where its stomach was checked." the officer said. “Sadly, there were human remains inside and these were identified as belonging to the missing teenager.'' “Unfortunately, there were human remains inside and these have been identified as belonging to the missing teenager. ”

Remains of 14 year old boy Ricky Ganya found in the stomarch of 14ft Crocodile which attacked and dragged him into the river while looking for snail inTangjung Manis, Malaysia. pic.twitter.com/LPxbUyb8bQ

Saltwater crocodiles are often sighted along rivers and by beaches in Malaysia's two states on Borneo, Sabah, and Sarawak. The reptiles have been blamed for a series of attacks in recent years in the area. Last year, it was reported that an Indonesian man was mauled to death by a crocodile in Malaysia. The victim's terrified nephew saw the whole thing happen as the crocodile dragged his uncle into the river. "(The nephew) was looking around, and then he saw his uncle's head in the water before being pulled back into the river," the police officer involved in the case said.

The reptiles, which can grow up to 7m long, have been blamed for a series of attacks in the south-east area of the Asian continent in recent years. It is estimated that each year hundreds of people die from crocodile attacks in Africa – many of these attacks are never reported in the media. Without an accurate reporting system in place, crocodile attacks in Africa are difficult to track, and very few are reproduced here. The majority of attacks recorded have also occurred in Southeast Asia and Australia.

Remains of 14-year-old boy are found inside a 14ft crocodile - six days after it snatched him off a river bank in Malaysia
Ricky Ganya, 14, was attacked by

Worldwide, crocodiles are estimated to kill about 1,000 humans per year, many more than sharks. Experts say the best way to fight off a crocodile is to poke its eyes in the hope it will let go. Nile and saltwater crocodiles are the most dangerous. Not all species attack humans. Many are wary of people and may only bite if they are disturbed or taken by surprise. Hopefully, more attacks can be prevented if people are made aware of the specific risks that face them.

Body found minus hands after crocodile attack in Sabah, Malaysia - 7th for the state in 2020 https://t.co/y5qpwZBlQn #grandsolar