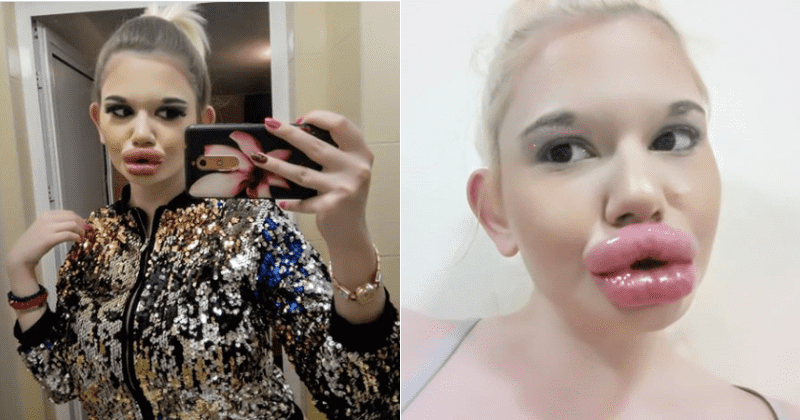 Big is beautiful? Uhm, maybe in the eyes of the beholder? While we're all for loving yourself, is there a limit to how much you should experiment with your look? An obsession with one's appearance may require professional help, don't you think? How much is too much? A 23-year-old from Bulgaria is challenging the idea of fuller lips. The young woman who has been described as "real-life Barbie" has been inflating her lips so much that she's got 20 rounds of lip filler injections done but that's not all. Andrea Ivanova plans to go even bigger.

The Sun reports that Andrea has been spending around £134, that's about $166.66 on each hyaluronic acid lip injection since 2018. After her latest injection, she shared an image of her gigantic lips, saying, "I had my latest injection two days ago. I feel great to have even more but some doctors think it's enough, though I still want them bigger. My doctor said he will do more injections for me but said I have to wait for at least two months. I like my new lips a lot."

Despite the struggles that come with going under the knife, the "Bulgarian Barbie" believes it's worth it. Simple and essential tasks like eating food were hard for her to do in the first few days after her surgery, according to the Daily Mail. "It was hard to eat after the injection, and two to three days after the procedure gets more difficult. I think my lips are lovely, I love them. I am not sure if they are the biggest lips in the world but they are one of the biggest, I think." Still not satisfied with the size of her lips, Andrea intends to continue getting more procedures. "I feel great to have even more but some doctors think it's enough, though I still want them bigger. My doctor said he will do more injections for me but said I have to wait for at least two months." She's now quadrupled the size of her lips in a bid to be "more fashionable".

Of course, reacting to people with unique appearances, we're guessing "normal folk" will have strong opinions towards the 23-year-old. But she's pretty chill about it. "I have visited almost all clinics for aesthetic procedures in Sofia and I put in my lips almost all kinds of lips fillers. I get thousands of compliments on my lips and on my outfit, and on my vision and style every day from people all over the world. I have both positive and negative comments, but women write most of the negative comments," she pointed out.

Woman, 22, who has spent thousands quadrupling the size of her lips in a quest to have the world's fullest pout undergoes her 20th injection - and she still wants to go BIGGER despite doct...
via https://t.co/7Kl0OCajxX https://t.co/mw2r1KExz3

No amount of backlash can stop her from doing what she wants. "There are people who like me with bigger lips and there are people who like me with smaller lips but it doesn't matter to me, because it's important for me, how I like it. Other people's opinion is irrelevant. I can't give any indication of how big is too big, or can lips be too big, because for each person, "big", "bigger" and "too big" are different concepts," she elaborated.

I guarantee if Andrea Ivanova didn’t own a phone to look at herself constantly she wouldn’t have messed her face up.pic.twitter.com/IM4EwZK2Dh

While many might consider her need to have such a big pout "obsessive", she dismisses the criticism. She also says she's not swayed by celebrities and her look is unique, she claims. When asked if she wants to have the biggest lips in the world, she said, "Yes, why not? In my country the big lips are fashionable and there are many girls with fillers in the lips too." As of now, the pouty 23-year-old is adored by her 64.7k followers who claim that “Bigger is better” and “I love Andrea's perfect big lips”. What do you'll think?

I’ve never seen a Barbie doll with a duck’s bill. Frighten the kids to death 😱

God, that video has just made me so sad! What is wrong with today's youth? They seem incapable of accepting who they are and feel compelled to create a complete fake version of themselves. It breaks my heart. It really does!