The two African-Americans were working for a moving and delivery company and were just doing their job when they were attacked. 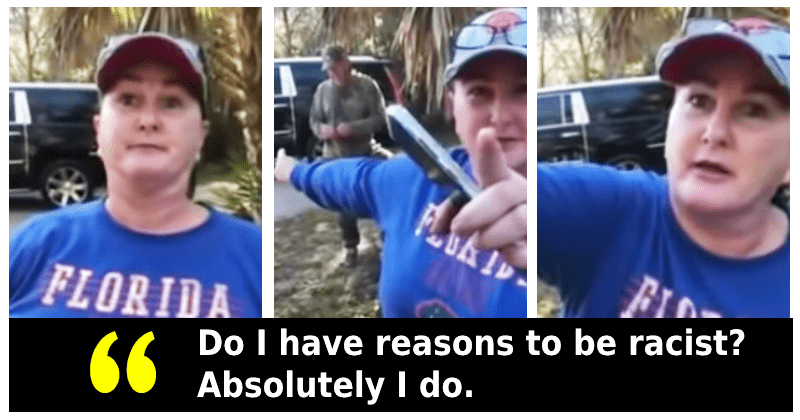 A Florida woman was filmed making a racist attack on two African-American men without any provocation whatsoever. The two men who were just doing to their jobs and unloading a truck when the White woman, Gina Brashear, verbally assaulted the pair, using the n-word repeatedly at them. “It doesn’t matter if I said it 100 times in 30 seconds,” Brashear told NBC2. “There’s nothing illegal about saying it.” Brashear was unfazed about using the slur. It all started after two employees of OF Logistics — a moving and delivery company — parked their truck in front of Brashear's driveway, so they could unload sheet metal for a job on the same street. She also hurled expletives at them after getting angry at a truck being parked in the road. Gina Brashear was unabashed in her racist attack and refused to apologize when confronted about it. The video of the racist rant was recorded by the woman's neighbor, for whom the two men were unloading sheet metal from a semi-truck. Brashear can be heard using the N-word at least six times in the small clip. The neighbor who recorded the video can be heard telling the White woman, "You're harassing us."

When they pass a law that I can't say the N***a, please bring it to me in writing," she tells the neighbor. Will Osley and Melvin Finley, who work for OF Logistics, were shocked with the intensity of the woman's hate. “Me and him are on the back of the truck. We’re still working. We’re still unloading the sheets of metal onto the pallet,” said Finley. “We start hearing this commotion on the other side of the truck just getting louder and louder and more intense.” After refusing to speak on camera, Gina Brashear spoke to an NBC2 reporter over the phone. When asked if she thought it was ok to use the N-word, she replied, “Absolutely. Do I have reasons to be racist? Absolutely I do.” A confederate flag could be seen hanging near her home, in a video posted online.

When asked if she was bothered by people calling her racist online, Brashear said she couldn't care less. “The one you need to get straight coming from me, I don’t care who’s upset. I don’t care that I’m called a racist,” said Brashear. A neighbor called 911 to report the racist White woman. The audio recording of the call was released. “I have people helping me here and she’s calling them the n-word,” the neighbor said. “I didn’t know she wanted the truck moved. She just started yelling at me about my fence and how I don’t have a permit for it. The guys who are helping me, she calls them the n-word a bunch of times.”

She refused to apologize over the rant. “To finally get someone to come out and go ‘I’m a racist. I’m sorry for what I did.’ That will never come out of my mouth. Ever. Never,” said Brashear. Melvin Finley of OF Logistics said he had been insulted before but this felt bigger. “I’ve been insulted before. It’s nothing new to me, but this time around it’s a little, I don’t know, it just feels a little different,” said Finley of OF Logistics. Finley added that the incident has filled him with dread at the thought of his 7-year-old son potentially having to go through something similar in the future. Finley added that such incidents shouldn't even be happening in 2021. Close to a year on from the Black Lives Matter protests, it's becoming increasingly clear that racism is still well and alive in America. “We have a very long way to go,” said Finley. “We have not come as far as we claim. We have a long way to go.”