Having endured a traumatic past, Emma was very wary of strangers and it took her a while to become more friendly. 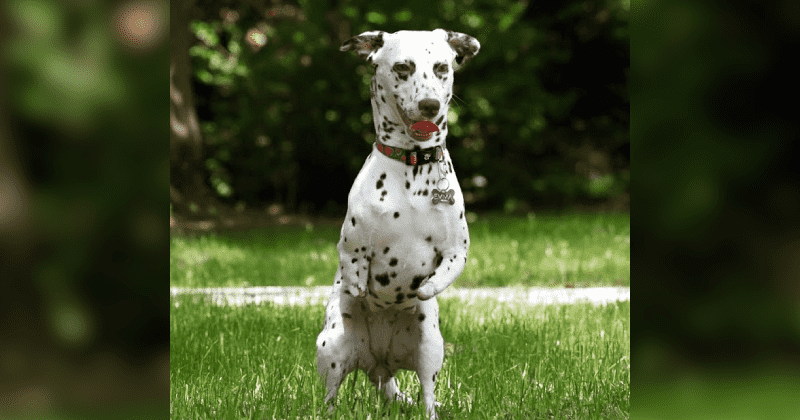 A two-legged Dalmatian was saved from a dog-meat slaughter-house in China and rehomed thousands of miles away in South Carolina. Dog lover Misha Rackcliff Hunt, 27, jumped at the chance to adopt the abused puppy, Emma, and had her transported to Florida just weeks before America outlawed the movement of animals on account of the coronavirus. Emma was adopted by Misha on April 26, 2020, and instantly connected with her. The three-year-old pup had her front two feet cut off at the slaughterhouse. The tips of her ears were shaved off and a part of her tail was also missing, reports the Daily Mail.

Emma's front legs were cut off because in meat trade it's believed that cutting off a dog's limbs without any anesthetics produces adrenaline which makes the meat tender. After Emma was recused and taken to a vet in Beijing, the vet suggested that Emma was discarded because she had a small toe defect. She had been rehomed for two years but returned to the clinic in 2019. Rescue groups knew Emma stood a better chance of finding a new home abroad and reached out to Dalmatian Rescue, a non-profit organization in South Florida. Misha, who's a guest services coordinator, spotted Emma online and instantly felt a connection. Misha knew this was the dog she was waiting for. "I remember first seeing Emma online – she has the most human-like amber-colored eyes. I didn't even think about the logistics of it. I knew this dog was sent to me for a reason," said Misha.

Misha was prepared for Emma to be wary of her because of all the abuse she had been endured but what she hadn't been prepared for was to see the Dalmation leap into her arms. "I thought she might be cold or not interested in people from the trauma but she came up straight into my arms. By the time we finished our five-hour road trip home, it's like she knew I was her person and that I was never going to leave her," said Misha.

While they felt an instant connection, Emma was still fighting a lot of inner demons, having lived through traumatic experiences. "When I first brought her home, she would scream at the top of her lungs whenever I left the room," said Misha. "She was always protective over her food and toys. At one point, she would even guard random pieces of my clothing because she was scared that it would be taken away. Due to the nature of her injuries, we know that they were human inflicted. This is apparently common with 'rare' breeds who are dismembered and tortured,' said Misha.

"Emma has a fear of any chainsaw-like sounds such as hair dryers, vacuums, and lawn-mowers," said Misha, which probably reminded her pup of the time her legs were sawed off. "She has a couple of missing toes on her back paw which a vet determined to be a birth defect so it's thought she was discarded at a young age as she wouldn't be sold or adopted," she added. Misha said Emma was very wary of men but found a way to help her move past that. "She can be wary of men too so I chose a male massage therapist who she loves seeing weekly. It's really changed her behavior," said Misha. The dalmatian is now undergoing massage therapy and a weekly swim. Misha said that Emma is happier than ever and becoming more friendly with each passing day.

Misha raised funds on social media to buy Emma a custom-made front wheel cart from Eddie's Wheels. Bionic Pets supplied Emma with some custom-made prosthetics, too. Emma has since become incredibly popular on Instagram and has more than 10,000 followers. "It's beautiful to see how much Emma's personality started to shine through a little more with each day. Emma has struggled with her cart and prosthetics because of the way she carries her body so we go to a local dog pool for water therapy. She has a massage to help with the tight muscles in her back," said Misha. "She's now realizing there's a whole world of activities out there." Emma loves beach day more than anything. "The beach is perfect for her because she can freely run around in the soft sand. I actually cried seeing how happy she was," said Misha. She now wants to raise awareness on and put a stop to the Yulin dog meat festival that's reported to kill at least 10,000 dogs annually.