'End of Days' claimed that a certain respiratory illness would spread across the globe in 2020. 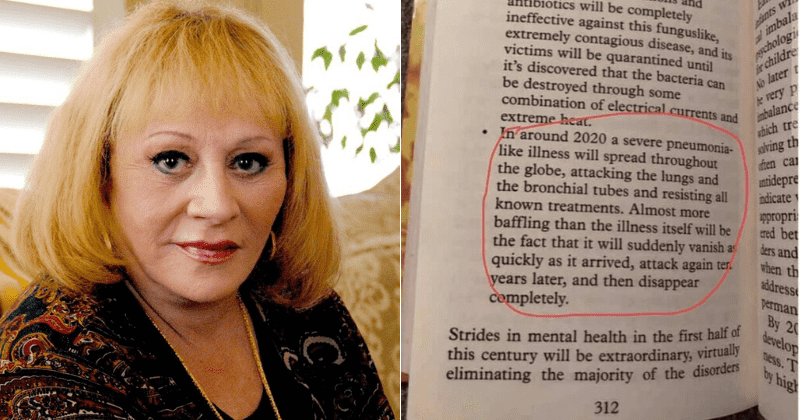 What's spreading like the coronavirus is the number of conspiracy theories about it! Social media is abuzz with theories that author Dean Koontz and the psychic Sylvia Browne foresaw the coronavirus outbreak. Twitter users are sharing pictures of pages from books with their 'predictions'. Koontz is said to have written about a coronavirus-like disease coincidentally called Wuhan-400 in his 1981 novel The Eyes of Darkness. Wuhan is where the source of the virus is said to be. Browne wrote of a pneumonia outbreak ravaging the world in her 2008 book End of Days: Predictions and Prophecies about the End of the World.

According to Snopes, Sylvia Browne is a self-described psychic who died in 2013. However, she did gain fame for her claims that she could predict the future and communicate with spirits. She has also been heavily criticized for falsely informing grieving parents of their missing or dead children. One time was when she predicted the death of Amanda Berry and told her mother, Louwanna Miller, that her daughter was dead. But it was later revealed that Berry was still alive, and held captive by Ariel Castro in Cleveland, Ohio for about 10 years before she escaped, along with her younger daughter, and two other women. According to ABC, on a 2004 episode of The Montel Williams Show Browne told the grieving mother, "She's not alive, honey. Your daughter's not the kind who wouldn't call." Miller told the Cleveland Plain Dealer newspaper that she believed "98 percent" in what Browne told her. Miller died a year later from heart failure.

However, now Twitter users are claiming that Browne's prediction in her 2008 book "that a respiratory illness would spread across the globe in 2020" seems too coincidental to the coronavirus. The Google Books version of End of Days reads: In around 2020 a severe pneumonia-like illness will spread throughout the globe, attacking the lungs and the bronchial tubes and resisting all known treatments. Almost more baffling than the illness itself will be the fact that it will suddenly vanish as quickly as it arrived, attack again ten years later, and then disappear completely.

So this will happen in 2030 again.... At least there would be some time to prepare

"Although it could be argued that stating a respiratory illness would sweep through the world in 2020 was accurate, other elements of the book passage are unknown or unlikely, and of course “predicting” a worldwide outbreak of a respiratory illness when one has already happened could be more a matter of lucky guessing than predicting." the myth-busting website wrote. The SARS (severe acute respiratory syndrome) outbreak of the early 2000s occurred before her book was published, so she may not have been unfamiliar with the process of respiratory illnesses. Health professionals have also stated that COVID-19 might become a seasonal illness.

Most of her other predictions have gone horribly wrong including the one where she said that there will be no Pope after Pope Benedict. This one is surprisingly accurate. One in Hundred.

Another conspiracy theory claims that American author Dean Koontz predicted the coronavirus outbreak in 1981. The Guardian reports that the sci-fi novel made a reference to a killer virus called “Wuhan-400” – eerily predicting the Chinese city where Covid-19 would emerge. However, the book claims that the virus was a"perfect biological weapon" that had a 100 percent kill rate. A passage from the book reads: They call the stuff Wuhan-400 because it was developed at their RDNA labs outside of the city of Wuhan.

Good research from the author. If you want the chinese to make a virus of course you're going to base it in Wuhan because of the research facility there. Interesting coincidence though

As for reality, The World Health Organization on Wednesday declared that the coronavirus outbreak is a pandemic, reports CNN. There are 118,000 cases, more than 4,000 deaths, the agency said, and the virus has found a foothold on every continent except for Antarctica. "We have never before seen a pandemic sparked by a coronavirus. And we have never before seen a pandemic that can be controlled at the same time," WHO Director-General Tedros Adhanom Ghebreyesus said on Wednesday. "Describing the situation as a pandemic does not change WHO's assessment of the threat posed by this coronavirus. It doesn't change what WHO is doing, and it doesn't change what countries should do."