Dr. Aruna Khilanani spoke to an audience at the Yale School of Medicine in April. 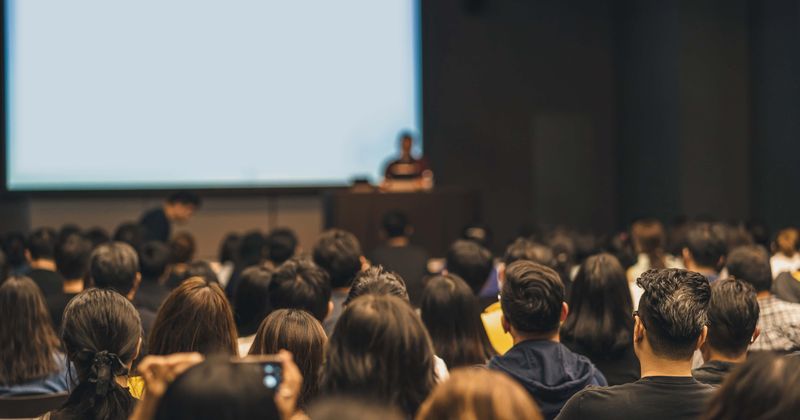 A New York City-based psychiatrist is making headlines after she told an audience at the Yale School of Medicine in April that she had fantasies of "unloading a revolver into the head of any white person that got in my way." The talk, titled The Psychopathic Problem of the White Mind, had been presented by the School of Medicine’s Child Study Center. The lecture included "learning objectives" such as: "Set up white people’s absence of empathy towards black rage as a problem" and "Understand how white people are psychologically dependent on black rage." Bari Weiss, a former writer, and editor for the opinion department of The New York Times posted an audio recording of it on Substack on Friday.

Right, she is free to speak her mind of she wants to murder whites. But if she wants to challenge critical race theory she will be canceled forthwith.

According to The New York Times, Dr. Aruna Khilanani described a "psychological dynamic that is on PTSD repeat," where people of color explain racism to White people, but they, in turn, deny their attacks. When people of color then react and become angry ( as their experiences are being invalidated) White people use that anger as "confirmation that we’re crazy or have emotional problems," she said. "We are calm, we are giving, too giving, and then when we get angry, they use our responses as confirmation that we’re crazy or have emotional problems," Khilanani said, per New York Post.  "It always ends that way, happens every time. Like a goddamn timer, you can count it down." She noted that she had "systematically" removed her former White friends from her life "five years ago." She said, "Nothing makes me angrier than a white person who tells me not to be angry, because they have not seen real anger yet."

She continued, "I systematically white-ghosted most of my white friends, and I got rid of the couple white BIPOCs that snuck in my crew, too. I stopped watching the news. Once I started, I couldn’t stop. It was also a public service. I had fantasies of unloading a revolver into the head of any white person that got in my way, burying their body and wiping my bloody hands as I walked away relatively guiltless with a bounce in my step. Like I did the world a f–king favor." she said.  "We are asking a demented, violent predator who thinks that they are a saint or a superhero to accept responsibility," she stated. "It ain’t going to happen. They have five holes in their brain."

She added: White people are out of their minds, and they have been for a long time … White people feel that we are bullying them when we bring up race. They feel that we should be thanking them for all that they have done for us. They are confused, and so are we. We keep forgetting that directly talking about race is a waste of our breath. We are asking a demented, violent predator who thinks that they are a saint or a superhero to accept responsibility. It ain’t gonna happen. They have five holes in their brain. It’s like banging your head against a brick wall."

Yale lecturer: 'I had fantasies of unloading a revolver' into 'any White person that got in my way' - Washington Times https://t.co/B4JgNA8GoX

Despite her giving the audience a heads-up about the provocative lecture, this didn't sit well with some, and she soon faced a backlash for her comments. Therefore, the forensic psychiatrist and psychoanalyst explained in an email on Saturday that her words had been taken out of context to "control the narrative." She pointed out that her lecture had deliberately "used provocation as a tool for real engagement." Khilanani said, "Too much of the discourse on race is a dry, bland regurgitation of new vocabulary words with no work in the unconscious,” she said. “And, if you want to hit the unconscious, you will have to feel real negative feelings. My speaking metaphorically about my own anger was a method for people to reflect on negative feelings. To normalize negative feelings. Because if you don’t, it will turn into a violent action."

Her lecture had divisive reactions. A Yale psychologist called the lecture "absolutely brilliant." A man said, "I feel very shook in a good way," and a Black woman was grateful to Khilanani for giving "voice to us as people of color and what we go through all the time." Others seemed concerned. JjomanJohn tweeted: I just think maybe she should have her license suspended if she is practicing medicine. Surely she has white patients who are seeking help from her.

The Yale School of Medicine said the tone and content of a lecture by Dr. Aruna Khilanani, who has a private practice in New York, were “antithetical to the values of the school.” https://t.co/u3kqT7EjCF

I think this article, how it’s written, is exactly what Dr. Aruna was calling out!