Protestors Eye Mount Rushmore As Next Target, South Dakota Governor Says 'Not on My Watch'

The sacred land was forcibly taken away by the US government in violation of a treaty after they found gold in the region. 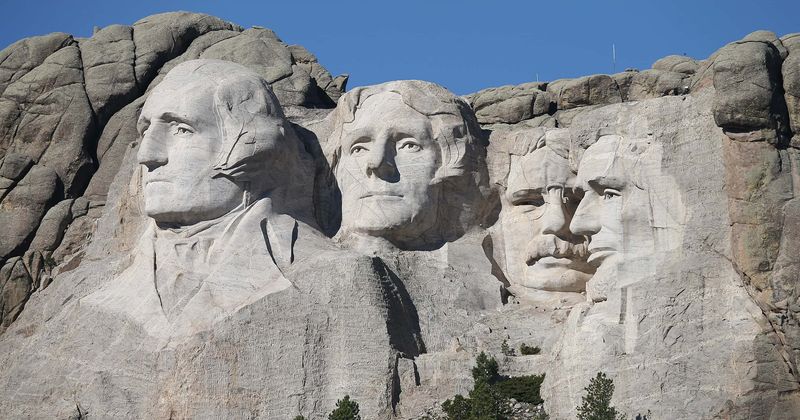 With protestors defacing and tearing down statues of figures with problematic pasts, the majority of the White population in America are wondering where does it stop? After the statues of George Washington, Christopher Columbus, Theodore Roosevelt, and Andrew Jackson were targeted, there have been rumors of protestors setting their eyes on Mount Rushmore, in the Black Hills region. Allaying the fears of the White population, South Dakota Republican governor Kristi Noem vowed to protect the monument. Governor Noem made the promise in response to a question by far-right commentator Ben Shapiro. "So, when is our woke historical revisionist priesthood going to insist on blowing up Mount Rushmore?" asked Shapiro. "Not on my watch," Noem replied on Tuesday. The governor's office stated that there has been "widespread chatter on social media about defacing or destroying Mount Rushmore," according to Newsweek.

Mount Rushmore was sculpted by a leader of the Ku Klux Klan and was named after a white capitalist who profited from violations of tribal sovereignty. The Lakota know this mountain as Tȟuŋkášila Šákpe or "The Six Grandfathers." You should too. pic.twitter.com/fLrAUVHvCD

It's important to look at Mount Rushmore's history to assess if one of America's favorite monument does indeed have a problematic past as has been touted by protestors. Mount Rushmore stands tall in the Black Hills region, which was originally considered the sacred land of the Native American tribe Lakota. The region was granted to the Lakota in perpetuity as part of the Fort Laramie Treaty of 1868 but that was until gold was found in the region, according to USA Today. Miners rushed to the region under an expedition led by Gen. George Custer in 1874 and demanded the U.S. Army's protection. Having already granted the land to the Native American tribe, the US government, using The Indian Appropriations Act of 1876, cut off all rations. The government refused to budge, demanding that Lakota end hostilities and concede Black hills to the federal government.

It has been a long-standing dispute between the Native Americans and the US government. The U.S. Court of Claims found that the Sioux Nation of Indians was entitled to $17.1 million in compensation because of the government's seizure of the Black Hills and thus violated the Fifth Amendment. The Native American tribe refused compensation because it would legally end their demand for the Black Hills to be returned to them. So to sum it up, the Mount Rushmore was built on Native American sacred ground which was forcibly taken away from them.

Mount Rushmore is tacky and racist.

Defacing Indigenous lands with faces in a bid to boost tourism is, tacky and racist.

The Mountain was originally called Six Grandfathers, representing Earth, Sky, and the four directions. The mountain was then renamed, at whim, after the first White man that expressed interest in it. In 1884, New York City lawyer Charles E. Rushmore asked his guide what the mountain was called. His guide, ignoring the 'Six grandfathers' replied, "Never had a name, but from now on we'll call it Rushmore," according to Vice. The monument features the faces of four US Presidents — George Washington, Thomas Jefferson, Theodore Roosevelt, and Abraham Lincoln. Protestors have targeted monuments and statues of all four Presidents with one of Lincoln's being targeted for its depiction of a black man at his feet. George Washington traded enslaved people and even after he stopped trading, he refused to free the enslaved people until his wife's death, as per his will.

Mount Rushmore before the 4 presidents faces. Here is a true fact on this place. The Native American's called it the Six Grandfathers (Earth, Sky and four directions). the name "Rushmore" was the name of a white guy who came to rob gold from the area in violation of a treaty. pic.twitter.com/bRsswwOGn3

It's no secret that America's 'glorious' past is steeped in White nationalism and the ethnic cleansing of indigenous people. It was sculptor Gutzon Borglum who carved out the faces of the Presidents on Six grandfathers and his choice of the four Presidents also stemmed from his views on race. "Art in America should be American, drawn from American sources, memorializing American achievement," said Gutzon Borglum, and by 'American achievement' he meant that of the colonizers. Oh, and he was also a member of the Klu Klux Klan and, naturally, racist.

Earlier this week, Donald Trump said that anyone vandalizing or tearing down monuments of statues on Federal property would face up to 10 years in jail. He tweeted: I have authorized the Federal Government to arrest anyone who vandalizes or destroys any monument, statue, or other such Federal property in the U.S. with up to 10 years in prison, per the Veteran's Memorial Preservation Act, or such other laws that may be pertinent. "This action is taken effective immediately, but may also be used retroactively for destruction or vandalism already caused. There will be no exceptions!" said Trump.