The royal family has been taking Christmas photos since the beginning of the 20th century. 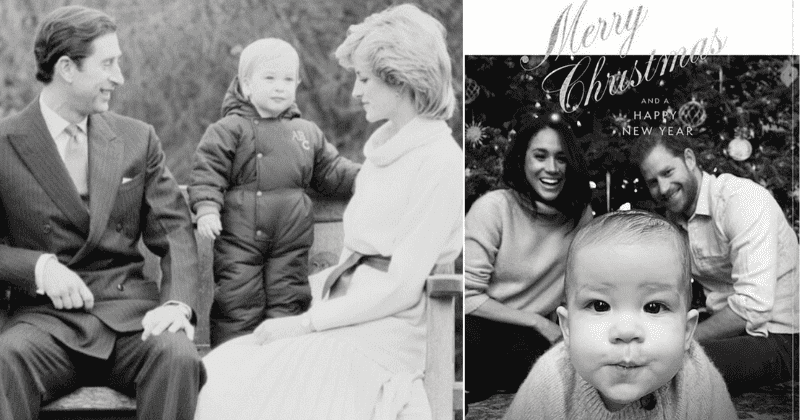 It's the first Christmas for the son of the Duke and Duchess of Sussex and the couple is spreading the holiday cheer by sending out the sweetest family card. Prince Harry and Meghan Markle posed for the photograph with Master Archie crawling towards the camera. The black-and-white photograph was taken by the Duchess' good friend and actress Janina Gavankar, according to Royal Reporter Omid Scobie, who posted the picture on Twitter. A digital version of the card was sent out to be more environment-friendly, according to E!Online. What's more magical is that the card was turned into a GIF with a sparkly background.

Merry Christmas from Sussexes!
Prince Harry and Duchess Meghan opted for an environmentally friendly e-card this year, sharing a new family portrait with friends, family, colleagues and charities (including all their patronages).

Prince William and Kate Middleton also sent out a card, but without the Duchess in the frame. That's because she was behind the lens and captured the sweet moment of her family together, according to Harper's Bazaar. The photograph, also in black-and-white, features the Duke of Cambridge kissing their youngest child, Prince Louis. The other two children are also in the frame with Princess Charlotte standing behind and Prince George sitting on a chair. The picture was taken in Norfolk earlier this year.

🎄 Merry Christmas to all our followers!

This photograph of The Duke of Cambridge, Prince George, Princess Charlotte and Prince Louis was taken by The Duchess of Cambridge in Norfolk earlier this year. pic.twitter.com/40j3Xg36Q4

It's hard not to compare this year's royal family Christmas cards with those of previous years. Especially during the time when Princess Diana posed with Prince Charles and her two young boys. The couple had sent out family cards featuring both their sons. Meghan Markle has often been compared to Lady Diana for being a princess of the people. And it looks like her legacy lives on. Despite battling conflicts and personal struggles, Princess Diana braved through and it looks like the persona of Meghan Markle is warming people's hearts just as much. In their newest Christmas card, it's clear that old family values still hold dear to the modern-day prince and princess. The Duke and Duchess of Sussex spent their first Christmas as a family with baby Archie in Canada, with Meghan's mother Doria.

According to The Express, the couple took a break from royal life after confessing that they were feeling the pressure in a documentary filmed during their Africa tour. A spokeswoman confirmed that they took a break to enjoy 'private family time in Canada with their seven-month-old son Archie. The spokeswoman shared, "The decision to base themselves in Canada reflects the importance of this Commonwealth country to them both. "The Duke of Sussex has been a frequent visitor to Canada over many years, and it was also home to The Duchess for seven years before she became a member of the Royal Family. They are enjoying sharing the warmth of the Canadian people and the beauty of the landscape with their young son." Whether she's paying tribute to the late princess through her outfits or taking a break from royal duties, it's clear that Meghan Markle is embracing Diana's spirit.

All the times Meghan Markle has paid tribute to Princess Diana | HELLO! https://t.co/j0wnqTJLVl