The Royal couple were captured working in the kitchen and a cafe for a non-profit initiative to provide food for senior citizens and youth across LA. 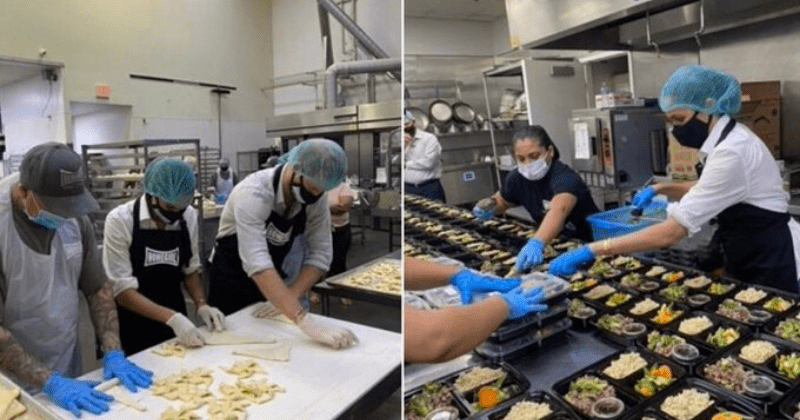 The former Sussex Royals have been settling into their civilian lives across the Pacific since renouncing their official titles as part of Queen Elizabeth's royal family. And now, with the pandemic still keeping much of the country in a dire state, they have stepped in to plug the gap with the help of a charity. Recently, Meghan Markle and Prince Harry visited Homeboy Industries, a social justice organization that's working to improve the lives of previously incarcerated and gang-involved people in Los Angeles, reports People. They could be seen wearing gloves, face masks, and matching hair nets as they gave a helping hand in the kitchen, serving the hungry.

The couple helped prepare meals during their visit https://t.co/lkkEpDC1bG

As part of their visit, the Duke and Duchess of Sussex joined Homies (the group's participants) working in the cafe and bakery. Hand in hand, the two worked to prepare food for the #FeedHOPE program, an initiative that uses Homeboy participants to offer meals to senior citizens and youth across LA throughout the course of the pandemic. Speaking about their Royal guests, Father Greg Boyle, the group's founder said: "The Duke and Duchess of Sussex were just 'Harry and Meghan' to the homies. They rolled up their sleeves and deeply engaged with our workers in the bakery and café. It was immediate kinship and heartening in its mutuality.”

Prince Harry and Markle didn't choose the place at random either. The actress reportedly knew Boyle for two decades now as he worked with Immaculate Heart High School, her alma mater. Besides, Markle and her mom Doria reportedly participated in a cooking workshop with Boyle in the 2000s with one source even saying: "She remembers the tamale recipe she learned there to this day."

Manager at the Homegirl Cafe, Mariana Enriquez said: "It was remarkable to share our Feed Hope program with Harry and Meghan.  They are both down to earth and kind. The staff was honored they took the time to see us, hear us and walk on our journey today. We will never forget it."

L.A.’s royal darlings, Prince Harry and Meghan Markle, have popped up performing yet another surprise act of service in the community. The Duke and Duchess of Sussex spent Tuesday afternoon baking @HomeboyInd #PrinceHarry #MeghanMarkle https://t.co/3zd4jWasXf

Thomas Vozzo, CEO of Homeboy Industries, said: "With their visit, the Duke and Duchess of Sussex saw the dignity and power that comes from having a job. At Homeboy, through our social enterprise businesses, people can continue to heal and they work, learning skills and changing their lives, changing their families and changing communities."

Besides charities, the couple has also begun using their clout in several ways in their quest to become financially independent. According to People, the duo has signed with Harry Walker Agency, a New York-based company for speaking arrangements. As part of their new venture, they will take part in keynote speeches with community forums, corporations, and trade associations while also engaging with issues relating to gender equality, racial injustice, and environmental concerns.

The speaking agency the power couple are associated with also represents other high-profile celebrities like Oprah Winfrey, Barack and Michelle Obama, The Clintons, Alex Rodriquez, Tina Fey, Lin-Manuel Miranda, Stacey Abrams, and Gloria Steinem. The couple is also moving forward with their new organization. They are also working on introducing Archewell, a non-profit named after their son Prince Archie behind the scenes. A source close to the couple had told People regarding the hiatus the project has taken due to the pandemic. "Nobody could have counted on the world turning upside down," the source said. "As many others have, they have been moved to get their voices behind supporting both the COVID-19 response and Black Lives Matter. They are excited to see it all come together. It’s what they have always dreamed of doing together."

Currently, the Royal couple is working to bring down the hate speech and trolling online with the “Stop Hate for Profit Campaign”  which they started recently.