His mother, the Duchess of Cambridge, took both these pictures 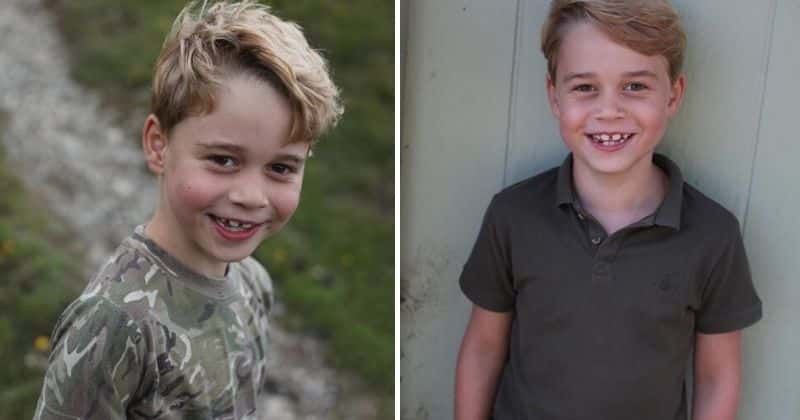 Prince George, the eldest son of Prince William and Kate Middleton, celebrates his seventh birthday on Wednesday. To mark the special day, his mother, Kate Middleton shared two images of her little boy on Instagram and Twitter on Tuesday. In one picture Prince George is seen in a casual steel grey colored polo t-shirt flashing a gap-toothed smile. In another picture, the prince is photographed sideways donning a camouflaged designed round neck t-shirt, once again smiling for the camera. Both photos were taken by his mother reports the BBC.

Sharing a 📸 taken by The Duchess ahead of Prince George’s seventh birthday tomorrow! 🎈 pic.twitter.com/GLPBoVsuYZ

Born on 22 July 2013, at a private wing of the St Mary's Hospital in central London, George's full name is Prince George Alexander Louis. A day after his birth, he was introduced to the world cradled in the arms of his mother with his dad beside them near the steps of the hospital. Prince George has spent most of his time at their royal estate in Norfolk with his family that includes his little brother, Prince Louis, and sister, Princess Charlotte. Prince George's parents had earlier revealed that all the royal kids were being home-schooled because of the coronavirus. Middleton said, "The children have got such stamina I don't know how. You pitch a tent, take the tent down again, cook, bake. You get to the end of the day and they have had a lovely time - but it is amazing how much you can cram into one day, that's for sure."

Thank you everyone for your very kind wishes on Prince George’s birthday today! 🎂 🎈 pic.twitter.com/L7dQDtQfaN

Prince George's parents have shared pictures of her eldest son on every birthday since he was one reports PEOPLE. On his first birthday, the royal parents shared a picture of him in his mom's arms with his father next to them in a garden. The baby's attention is occupied by something at a distance. The images were shot at the Sensational Butterflies exhibit at London’s Natural History Museum. Last year, on Prince George's 6th birthday, his parents shard a photo of him in the official England national soccer team jersey as he lays down laughingly on the grass at their Kensington Palace home according to another PEOPLE report.

In another photo, he was seen wearing a green polo t-shirt and striped shorts as he smiled for the camera in a candid shot. "The Duke and Duchess of Cambridge are very pleased to share new photographs of Prince George to mark His Royal Highness’s sixth birthday. Thank you, everyone, for all your lovely messages!" read a statement by Kensington Palace. It's not just birthdays where photos of the cute little boy are shared. They have been other occasions, too, such as this family picture that was shared ahead of Father's Day that shows Prince George in a mischievous mood clambering all over his dad alongside his siblings. Julia Samuels, the late Princess Diana's close friend, and godmother to Prince George who called him "amazing" in a recent interview.

She added, "He's funny and feisty and cheeky and God she [Diana] would have loved him so much," and rued that her late friend was not there to see her grandson. "That is heartbreaking for all of them," she said. Samuels added about marking the little royal's birthdays, "I come in slightly tipped by the size of the present that William then has to spend days putting together. And then put all the machinery together, and it makes awful tooting noises and lights flashing and all of that. That makes me laugh, and it makes George laugh."