trending celebrity people lifestyle news animals
Trump Struggles To Answer What He Got Melania For Christmas: "Got Her A Beautiful Card"

Trump Struggles To Answer What He Got Melania For Christmas: "Got Her A Beautiful Card"

Seemingly surprised by the question at first, Trump blurted out that he had given her a "beautiful card" and was "still working on a Christmas present." 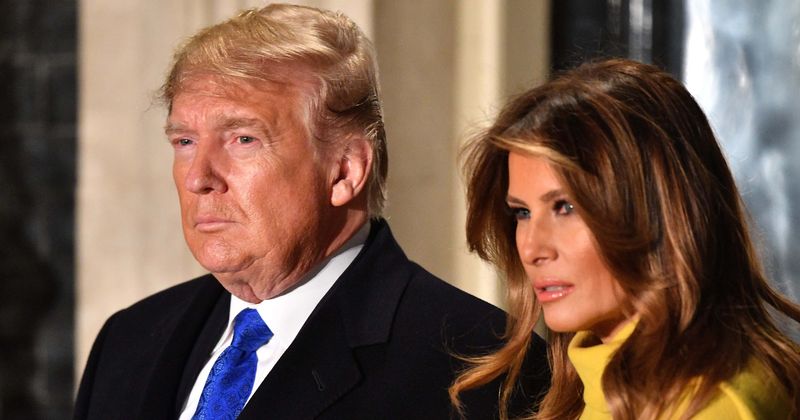 First lady Melania Trump put together a spectacular white Christmas at the White House this year. Inspired by the traditions, customs, and history that make America great, the 49-year-old decked the halls with stunning monochromatic decorations honoring "the courageous individuals who have shaped our country and kept the American spirit alive." While the former model left no stone unturned in making the Trump family's 3rd Christmas at the White House a memorable event, she may have been left slightly disappointed by what her husband got her for the holidays—or rather, didn't get.

President Donald Trump seemed to struggle for words on Christmas Eve when asked what he had gifted the first lady for the holidays. A member of the army posed the question to the POTUS during his video teleconference with members of the US Armed Forces from his resort residence in Palm Beach, Florida, on Tuesday. Seemingly surprised by the question at first, Trump blurted out that he had given her a "beautiful card" and was "still working on a Christmas present."

"What did you get Mrs. Trump for Christmas this year?" the service member asked the President who, in a video of the call, appears to be have been caught off guard by the question. He admitted that it wasn't an easy question to answer, saying, "That's a tough question. Well, I really should say, I got her a beautiful card... Actually I had a number of... I picked the nicest one... a lot of love. We love our family, and we love each other. We’ve had a great relationship, hopefully like you do with your spouses. And I think I'll answer that by saying I’m still working on a Christmas present. There’s a little time left. Not much, but there’s a little time left."

Question: "What did you get Mrs. Trump for #Christmas this year?"

President Trump: "That's a tough question. Well, I really should say, a very beautiful card... We've had a great relationship and I think I'll answer that by saying I'm still working on a Christmas present." pic.twitter.com/s71fSDsGxf

On the other hand, the first lady may not have been that surprised by her husband marking the holidays with just a card as this seems to be his go-to gifting style for special occasions. According to The New York Times, during an appearance on Fox and Friends in April 2018, Trump admitted that since he was very busy, he'd gotten Melania a beautiful card and flowers for her birthday. "I better not get into that because I may get in trouble. Maybe I didn't get her so much," he said at the time.

During the call on Christmas Eve, the President also thanked the troops for their service, sending them well-wishes over the holidays. "I want to wish you an amazing Christmas and a happy New Year. You are tremendous warriors and we appreciate it so much. Because of your brave and selfless service, Americans can celebrate Christmas in safety and in peace. We all appreciate you so much," he said.

According to The Hill, the 73-year-old concluded the call by touting his administration’s efforts to develop new submarines and other military equipment. "We are building a couple of submarines, by the way, that will be the most lethal weapons in the world. Hopefully, we never have to use them from that standpoint... but we’re going to have them very soon. I think we’re poised for tremendous success in the United States, and enjoy that new equipment we’re getting you. It’s made in the U.S.A. — every bit of it," he said.