Pregnant Elephant Dies After Being Fed Pineapple Stuffed With Fireworks

She was found with her trunk and mouth in the water, probably to soothe the pain. 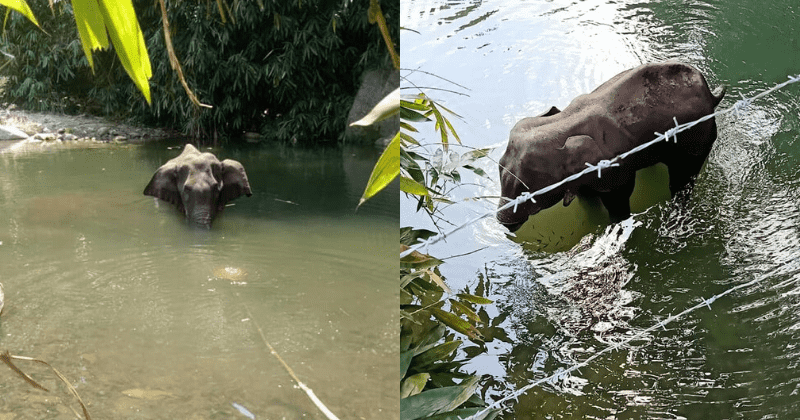 Trigger Warning: The story has images and descriptions of animal cruelty that readers may find disturbing

In a tragic case of animal death, a pregnant elephant in India died while standing in a river trying to soothe injuries on her mouth caused by the food she ate laden with crackers. These exploded in her mouth and caused severe damage to her tongue and insides and led her to roam around in pain for a week before she died. Although livid with pain she did not cause any damage nor attack any humans. According to a report in NDTV, the animal had just left the forests of Silent Valley in Palakkad district, located in the Southern Indian state of Kerela, in search of food. She was roaming around a village and found some pineapples that had the crackers, kept by locals. Keeping pineapples with crackers is a common practice in these parts of the country as a measure to drive away wild boars that damage the crops. The incident took place late last month.

The tragedy garnered attention after a government forest officer named Mohanan Krishnan narrated the details of the horrific death on his Facebook page. "She trusted everyone. When the pineapple she ate exploded, she must have been shocked not thinking about herself, but about the child she was going to give birth to in 18 to 20 months," said Krishnan.  A Rapid Response Team to rescue the elephant has also formed after the incident was found out. It was also known that the elephant had suffered extensive injuries on her mouth and tongue due to the explosion that ripped through her insides.

Writing about how the animal did not harm to any people despite having all the reasons to do so, Mohanan stated, "She didn't harm a single human being even when she ran in searing pain in the streets of the village. She didn't crush a single home. This is why I said, she is full of goodness." The post also included several pictures of the animal. The elephant ultimately went to the Velliyar River and died there. Photos shared by Mohanan showed the elephant standing in the river with her trunk and mouth in the water. She was probably doing this to ease the pain and burn from the injuries she had just suffered as well as to avoid flies and other insects on her injuries according to Mohanan who was part of the Rapid Response Team. He wrote the post about the elephant in the local language.

To lead her out of the water so that the rescue team could help her, two captive elephants named Neelakanthan and Surendran were brought but the efforts were in vain. Officials tried for hours to rescue the elephant. The elephant ultimately died on May 27 at around 4pm. She was still standing in the water when she died. "But I think she had a sixth sense. She didn't let us do anything," Krishnan wrote while adding, "She needs to be given the farewell she deserves." The elephant was taken out of the river and back inside the forest in a truck, where she was cremated by forest officials. "We took her inside the forest in a lorry. She lay there on firewood, in the land she played and grew up."

He added, "The doctor who did her post-mortem told me that she was not alone. I could sense his sadness though the expression on his face was not visible due  to his mask. We cremated her in a pyre there. We bowed before her and paid our last respects," the forest officer said. According to The News Minute Dr David Abraham, Assistant Forest Veterinary Officer, Thrissur, said, “It was when I noticed her enlarged uterus that I realised it had a one-month foetus. I removed its foetus. Emotionally, it was an unusual case for me,” Speaking about the injuries on the elephant, he added, “Its jaws were mangled. It might not have had food or water, due to which it looked frail. Her wounds looked at least one-week-old. There was maggot infestation, too,” said Abraham. Another official said a case will be registered and an investigation will be carried out on the animal's death.