The victim's family claims that the 18-year-old had no weapon on him and was shot without any provocation. 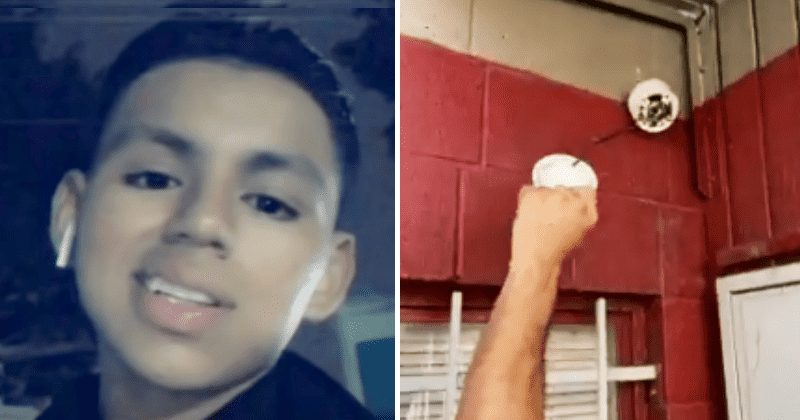 A teen security guard was shot dead by cops in a horrifying incident in Los Angeles on Thursday night. Andres Guardado, 18, was killed in an alleyway near the auto shop he patrolled. Cops claim that he flashed a weapon at them before running away from them. His family insists the teenager didn't have a firearm on him. "He's got a clean background and everything. There's no reason," said Andrew Heney, the man who hired the teen as a guard. Police maintain that they chased him and shot him dead when they confronted him. "Deputies observed the individual, at which point he observed the deputies,'' said Lieutenant Charles Calderaro said during a press briefing. "The individual then produced a handgun and began running southbound away from the deputies through businesses nearby."

According to the Manager, Andrew Haney, Andres was talking to a couple girls in their car when Sheriff’s drew guns, pursued, and killed Andres. Here’s him breaking it down. pic.twitter.com/oQyA8Gohrk

"Deputies engaged in a short foot pursuit between the two businesses. At some point, deputies contacted the suspect and that's when the deputy-involved shooting occurred," said Calderaro. The cops refuse to confirm if Guardado had fired any shots. He was pronounced dead at the scene. Lieutenant Calderaro confirmed no cops were injured.

The 18-year-old's sister accused the cops of killing him for no reason. "He has always worked as a professional security guard," Guardado's sister told ABC7. "He had no armed weapons on him. None." The Lieutenant claimed a gun was recovered from the alleyway the alleged chase happened. There is footage of a weapon lying in the alleyway and the authorities are claiming it is Guardado's handgun. The 18-year-old was in plain clothes and not his security guard uniform at the time of the incident.

He was working security at an auto shop.

They pulled their guns on him when they showed up and then shot him in the back as he ran for his life.

The Guardado family rushed to the scene and was involved in an altercation with the cops. "I lost a part of me, it's empty, and I'm never gonna have him back," said the teen's sister, Jennifer Guardado. "I'm never gonna see him, he's never gonna talk to me. I just can’t believe this happened to my brother. It really hurts me." She accused the cops of killing not just the individual but all his dreams. “He was gonna make it in life. He was gonna make it and become a good, professional man in life, but they took that away from my family and me. My parents are completely destroyed. We’re all dead already inside,” added Jennifer.

Andrew Heney, owner of the auto body shop who hired Guardado as a private security guard said the 18-year-old ran from the cops only because he was scared of them. "We had a security guard that was out front because we had just had certain issues with people tagging and stuff like that," said Heney. "And then the police came up, and they pulled their guns on him and he ran because he was scared, and they shot and killed him." Heney insisted that Guardado had no criminal record. "There's no reason" he was killed, said Heney. The auto body shop owner also claimed that the cops had broken all the CCTV camera footage that possibly recorded the shooting and confiscated the DVR.

This is after LA county sheriff's deputy MURDERED Andres Guardado an 18 year-old Latino boy who was shot 7 TIMES on his knees, hands behind his head UNARMED.

They broke all the cameras and took the DVR, which they pulled a warrant for.

An investigation has been launched into the incident. Guardado's killing comes at a time when there are widespread protests against police brutality aimed at minorities in America. Protests broke out in all fifty states after George Floyd, a 46-year-old Black man was killed by a Minneapolis cop. Derek Chauvin had kneeled on Floyd's neck for more than 8 minutes, causing asphyxiation.

I just found out that Tamir Rice was supposed to graduate this year. His whole life was stolen from him. The officers who murdered that 12 year old boy 2 seconds after they arrived on the scene were never charged with a crime. No justice. No peace. #BlackLivesMatter pic.twitter.com/GrgLGWbSGZ

While cops can claim that Guardado flashed a gun, it's no secret that minorities fear the police force because they've been repeatedly targeted by them over the years. African-Americans and those from the Hispanic community are killed disproportionately by the cops. In 2014, Tamir Rice, a 12-year-old Black boy was shot and killed by cops. He was throwing snowballs and playing with a toy pellet gun in a Cleveland park when a police car passed by the area. Police officer Timothy Loehmann shot the 12-year-old within two seconds of stepping out of the car, reported Vox.