The whole neighborhood came together and held a march against "Permit Karen" for harassing the Black family. 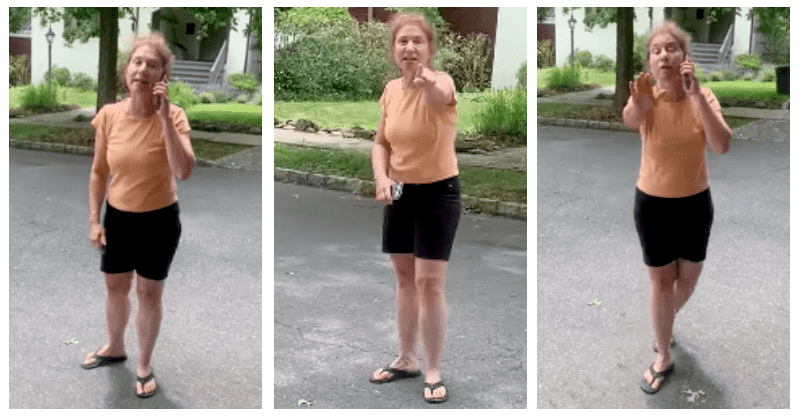 A New Jersey Karen shot into the spotlight after questioning her Black neighbors if they had a permit to build a patio on their own property. Dubbed "Permit Karen", she started an argument with them before calling the cops on the Black Family, claiming to have been pushed by Fareed Nassor Hayat in Montclair. The Black couple shot the incident on camera after she played the victim. She had gotten into a heated argument with them over building a patio. The woman was identified as Susan and had confronted the neighbors about requiring a permit to build a patio despite herself not knowing if a permit was required. After being told that they didn't require a permit, she realized the basis of her argument was gone and accused Hayat of allegedly pushing her. She called 911, claiming she was harassed by the Black man. The entire neighborhood came together to protest Susan's actions.

Hayat posted the video via Facebook Live and wrote a caption calling out the White woman. It has happened again. White entitlement and Black hate embodied in Susan who lives on Marion Road and works at the EPA, called the police to lodge a false report of an assault against me when told to leave our property, wrote Hayat. He stated that it was Susan who came poking her nose into their business and harassing them over claims that they didn't have a permit to build a stone patio. Susan, aka ‘Permit Karen,’ came onto our property three times within thirty minutes to demand to know if we had the proper permit to install a stone patio in our backyard, on the other side of the fence of her yard. When asked if a permit was required by law, she said she didn’t know, but insisted we answer her questions and submit to her demands, or she would call the police to force us to stop improving our home.

Hayat confirmed that he and his wife had confirmed with their contractor that they did not require a permit to build "a stone patio this size" on their property. She then sought to weaponize police brutality against the Black community by claiming she was pushed by the man. When challenged about her flawed legal conclusions, assumption of right, her lack of agency over our home and our eventual demand that she leave our property immediately, Susan decided to call the police and make a false report of assault. She invoked centuries of brutality in her call to the police and sought to put her black neighbors back in their place, continued Hayat.

A peaceful protest today in Montclair, organized by local youth, to the home of Susan Schulz, recently caught on tape in an unbelievable display of white privilege. SS called the police, who turned out in force, claiming a brick was thrown. Not by this crowd! pic.twitter.com/2UMCxqOEd1

As more neighbors stepped out hearing the commotion, none of them backed Susan's claims that she was pushed. Susan accused some of the white neighbors of not taking her side. The neighbors backed up the Black couple in front of the cops as well, leaving Susan embarrassed. Her efforts were also met by a collection of largely white neighbors, who refused to simply go along with her racist efforts or not stand up against her attempt to invoke the racist power of the state through police. Their efforts were antiracist ideology at work. Each neighbor declared to her and the police that she summoned, that she was a lie and no such assault occurred, added Hayat.

He said it was important to call out the entitled white people. "To her Black Lives Don’t Matter when up against her presumed inalienable rights of whiteness. She did not see the flaw in her ways or apologize for her behavior. Her type, the racist, must be rejected and ostracized like she was today by Norrinda and I, but equally important, by our white neighbors here in Montclair and our white and non-white allies worldwide," noted Hayat. The video received more than 12k shares and 10k interactions.

Okay so the neighbors put in their local group and mobilized and got it together quickly. This is well done. pic.twitter.com/t34WzqiAOq

Montclair Deputy Police Chief Wilhelm Young confirmed that no charges had been leveled against either party but added that they were investigating the incident, reported Montclair Local. More than 30 Montclair residents, a majority of them being students, staged a protest against the white neighbor.