trending celebrity people lifestyle news animals
Are You Disgusted By This Image? Then You May Have Trypophobia

Are You Disgusted By This Image? Then You May Have Trypophobia

Research suggests that as many as 18% of women and 11% of men - or 15% of the general population become visibly agitated when they look at images of clustered holes or bumps. 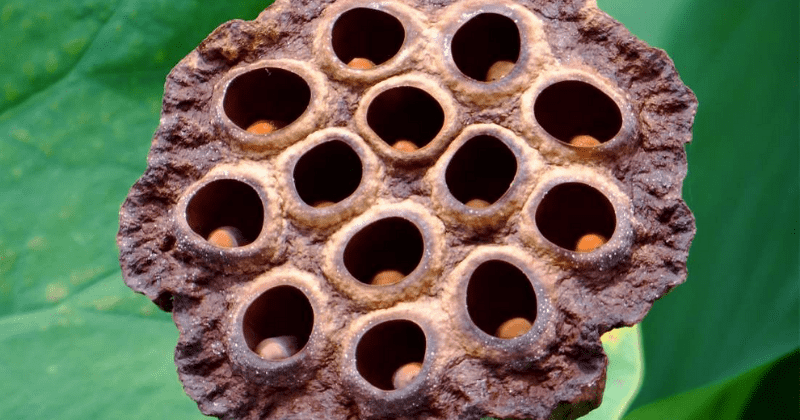 Trigger warning: Trypophobia. This story may contain images that some readers may find disturbing.

It's a lesser-known fact that there is literally a phobia for everything you can think of. Even if it's not an actual 'fear' per se, there are people who find many things as unpleasant or straight-out disgusting. Some uncommon examples are clustered holes, bumps, and similar patterns that tend to turn many eyes off the edge. Some 15% - 17% of people may experience this disgust called trypophobia. Again, though it is not considered a true phobia, many researchers agree that it has instinctive roots in the human brain.

Check out this photo of a lotus fruit, for instance. Does it make your skin crawl? Do you see it as a regular 'fruit' or does it evoke an uneasy feeling in you!? A 2013 paper in the journal Psychological Science quotes how one feels when facing a triggering image: "[I] can't really face small, irregularly or asymmetrically placed holes, they make me like, throw up in my mouth, cry a little bit, and shake all over, deeply." There is also research to suggest that as many as 18% of women and 11% of men - or 15% of the general population become visibly agitated when they look at images of clustered holes or bumps. Well, these sorts of clusters are actually common in nature, but they can range from super creepy to everyday mundane sights.

Technically, this 'trypophobia' is called a "Fear of holes", and researchers have found that it's not just pertaining to holes alone. The phobia is unfortunately not yet recognized by the psychological community, because they state that it doesn't have the signs of a true phobia, at least in a diagnosable sense. "Trypophobia is more akin to disgust than to fear, and that the disgust is probably an overgeneralization of a reaction to possible contaminants," Arnold Wilkins, a psychologist at the University of Essex, previously told Tech Insider in an email. "The disgust arises from clusters of objects, and these objects are not necessarily holes, despite the name trypophobia."

This is no simple problem, and scientists like Wilkins continue to study, quantify, and try to explain this complex 'phobia' and its origins in the human mind. According to Wilkins, and his co-researcher Geoff Cole, they have hypothesized that this strange revulsion may actually be rooted in biology. We as a collective have gradually evolved to fear or be disgusted by these formations because there have been times that they had been dangerous when found in nature. To identify this effect, the researchers analyzed images found on trypophobia websites and images of holes that don't trigger trypophobia, looking for differences. Amidst the research, one of the self-reported trypophobics were interviewed and they mentioned a fear of the pattern on a blue-ringed octopus, whose venom is deadly.

i present to you Trypophobia, one of the only fucking phobias that i have that make my damn skin crawl 🤢 pic.twitter.com/pzIjZyztfa

I love bell peppers but HATE preparing them. It makes my trypophobia tingle pic.twitter.com/TJAe6LiuYi

So this was the moment when the researchers realized that this could potentially be an actual 'phobia'. Well, you can see for yourself what kind of reaction it has on you! To test their theory that these feared formations are linked with danger, they collected 10 images of the most poisonous species to analyze. The species they selected included the box jellyfish, the Brazilian wandering spider, the deathstalker scorpion, the inland taipan snake, the king cobra snake, the stonefish, and a few more. They also showed a pufferfish, whose liver and skin contain a poison. It's the second-most poisonous vertebrate in the world.

"There may be an ancient evolutionary part of the brain telling people that they are looking at a poisonous animal," Cole said in a 2013 press release. Put it another way: The disgust some feel may well provide an evolutionary advantage, even if unconscious as it makes people with trypophobia want to run as far as possible from the holey-looking thing. "We think that everyone has trypophobic tendencies even though they may not be aware of it," Cole added in the release. "We found that people who don't have the phobia still rate trypophobic images as less comfortable to look at than other images."

Sorry for people with trypophobia, but I'm genuinely happy with how my banana choc chip bread turned out today! 😋 pic.twitter.com/HvzXSIIj1b