trending celebrity people lifestyle news animals
People Are Calling Out J.Lo And Shakira For Their 'Vulgar Outfits' At Super Bowl

People Are Calling Out J.Lo And Shakira For Their 'Vulgar Outfits' At Super Bowl

The Super Bowl performance had everything you hoped for including some of J.Lo's and Shakira's biggest hits with pole dance, crowd surfing and plenty of hip swivels. 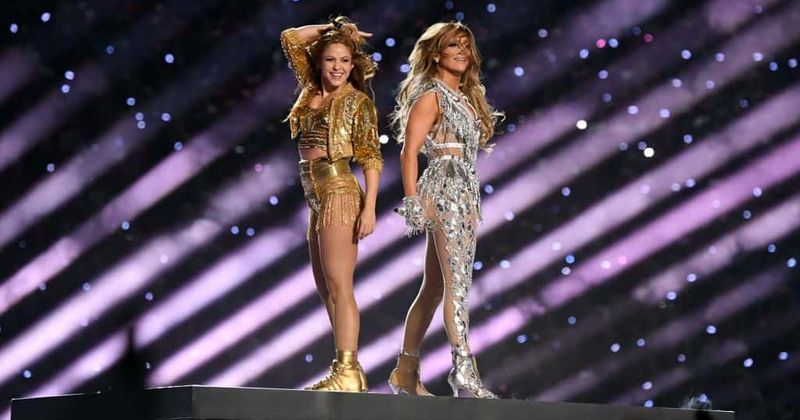 When Jennifer Lopez and Shakira first announced that they were going to perform at the 2020 Super Bowl last year, we all knew that it was going to be something extraordinary. And oh boy, what a performance it was. Fans, media, and other celebrities could not stop raving about how energetic and electric the two were. But then there was a group of people who also felt they were far too "vulgar" with their outfits, showing a lot of skin. Yes, this is still happening in 2020.

Meanwhile, a report on CNN called the duo's performance "everything you had hoped for" that included some of the two singers' biggest hits as well as pole dance, crowd surfing and plenty of hip swivels.

Another article in Vox stated that the Shakira and J.Lo "dazzled" during the halftime performance. There was also that performance marked by a political statement with J.Lo donning a feather costume of the American flag on it, according to a Mashable report. This was just before her 11-year-old daughter, Emme Maribel Muñiz, sang a ballad version of her song 'Let's Get Loud' from behind a glowing cage-like dome. The child was accompanied by other children inside their own glowing cages making a statement about the ongoing immigration crisis at the US-Mexico border. But obviously, a lot of people were more bothered by what the singers were wearing.

Shakira was more well dressed but J Lo's outfit was quite skimpy....then came the booty grinding

Twitter user Ali Dockstader wrote: I was not impressed with Shakira and J Lo. Only interested in showing off their bodies and how vulgar they can be. No self respect! Another user Emptynester1491 wrote about how he had just come back from church when he had to be subjected to the "vulgar..display." The post read further: I went to church this morning and after seeing the vulgar and sexual display that J Lo and Shakira put on, I feel like I need to have my brain and eyes washed. J Lo is such a ho. Ellie Peters, another commentator had this to say:
Their outfits should be behind closed bedroom doors. Shakira looked and kept dirty tongue action vulgar crotch shot the same and wiggling friend are not family friendly shows.

Objectify: degrade to the status of a mere object.

She added: J Lo beautiful but inappropriate outfits crotch shots And old songs to boot. Disappointed vile show. Another user, TruthTellerVB501 commented: J LO was nasty - vulgar. Her performance and the presence of children was inappropriate and disturbing. But there were also those who came to the defense of the two stars. One of them was Sophia Rxyenia who wrote: I love how white people are upset my Latina queens J.Lo and Shakira were “half naked” like they didn’t have Adam Levine’s raw chicken ass prancing across stage without his shirt on last year. Another commentator Tsunderelli said it was absurd that people were complaining about outfits in this day and age.

Shakira & J.Lo really shut it down!

Tsunderelli wrote: Legit that is the only thing it can be. Because damn, Shakira and J.Lo slayed and if we're gonna complain about skimpy popstars in 2020, may I all remind you of the Slave 4 U video that Britney put out in 2001? Skimpy popstars been part of American culture my whole life. I'm 34.