People Are Getting Vintage Pyrex Pattern Tattoos And They Look Lovely

Who knew that this vintage crockery would set a tattoo trend? 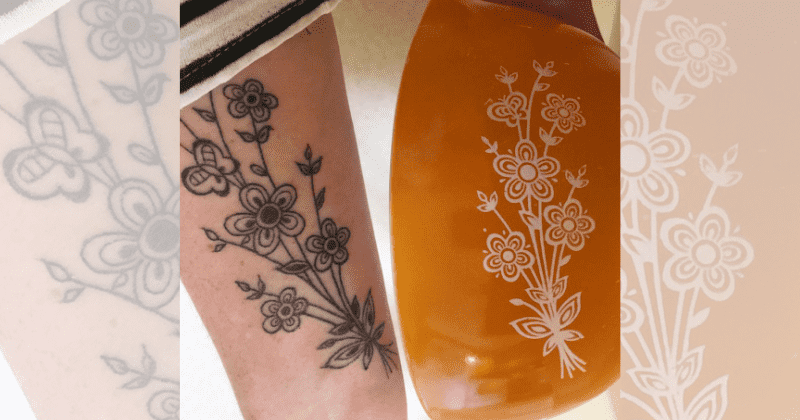 Getting tattoos has become really popular over the last few decades and you can pretty much get one in any design or style today. Remember when grandma used to use certain brands of cookware, like Pyrex? These items had some amazing durability to them and have unique patterns. Over the years, these dishes have turned into valuable objects of iconic status.

According to Real Simple, pyrex-inspired tattoos have become somewhat of a trend.  People have taken their love for Pyrex's playful designs and have started inking their body with their designs. While some have opted for floral patterns, others have gone the geometric design way sealing their love for them permanently on their body. Talk about a vintage-inspired dishware dedication!

"I can't believe it has been an entire year since getting this tattoo, I still get compliments on it all of the time :)," Matt Macomber wrote underneath a photo of his body art on Flickr in 2012. Pinterest user Glenda Holcomb also uploaded a photo of her floral tattoo on the website a few years ago.  "My Spring Blossom Pyrex Tattoo, with matching nails using Vivid Lacquer Stamping Plate VL030, and of course, my Spring Blossom Loaf Pan!" she wrote in the description.

Now, thanks to Instagram, the Pyerrx tattoo trend has emerged stronger than ever with more people sharing photos of their body's artwork. Many of these works are truly impressive and you can see exactly why. "This is ON ME! The wonderful @aliciaetattoo gave me this adorable little hen in a Pyrex teacup on the first day of the convention," one person wrote on the caption of a photo in which they're showing off their pyrex teacup tattoo. By the looks of it, some people have gotten their bodies inked with Pyrex patterns simply because they're that passionate about the glassware, while the others got theirs for more sentimental reasons.

"I’ve collected vintage Pyrex for probably about eight or more years," Tairyn Phillips, 33, told TODAY Style. "This is one of my favorite patterns called woodland, and I was looking at a bowl I had one day and I was like, 'That would make the cutest armband tattoo.'"  She added, "I’ve collected vintage Pyrex for probably about eight or more years. I actually got a friendship mixing bowl from my grandmother." Becky Matheson, a 36-year-old tattoo artist from Halifax, Nova Scotia, Canada, also told the outlet that she also ended up getting her love of Pyrex from her grandparents. As a tattoo artist herself, Matheson says she even keeps some Pyrex on display in her studio since "it makes people happy to see things that remind them of loved ones." "Pyrex is so special to me because of the nostalgia factor," said Matheson. "I started my collection by receiving a couple of pieces passed down from my grandparents or my parents."

"My husband found my first pink gooseberry bowl right when I had started collecting Pyrex," said Brittnee Coomer, a social media manager and vintage housewares collector in Denver  "We were so excited, as these are ... from the 1950s and this color-pattern combo is highly sought after." She continued, "This tattoo is special to me, because it reminds me of the fun (my husband and I) have together. He also wanted something to make him think of me."