'When the idea came that maybe we should try to save it, it wasn't so much about the candy, it was about, a place that brings joy to the community.' 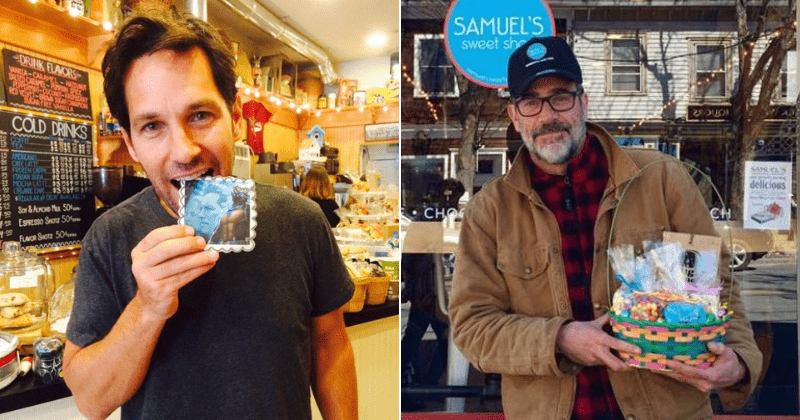 At first glance, Samuel's Sweet Shop sits unassumingly between a clothing shop and a CVS in the Village of Rhinebeck, New York. But behind its bright red door, the 400-square-feet, one-story building houses a world of sweet treasures. From "Clodhoppers"—an amalgam of peanut butter, pretzel and graham cracker in milk chocolate—to "Over the Tops"— a Reese's peanut butter cup sandwiched between two unlocked double-stuf Oreos and dipped in milk chocolate—the store shelves are stacked with a range of candies, desserts and pastries in beautiful colors and nostalgic packaging that are every candy lover's dream come true.

While it has a rich history of over 25 years, Samuel's Sweet Shop has been drawing customers from far and near in recent years—thanks to the timely intervention of a group of celebrities—when the business faced an uncertain future and possible closure following the death of its original owner, Ira Gutner, in 2014. Actor Paul Rudd and his wife, Julie; Jeffrey Dean Morgan of television's "The Walking Dead" and his wife, Hilarie Burton of "One Tree Hill" fame; and part-time Dutchess resident, Andy Ostroy and his girlfriend, actress Phoebe Jonas, were devoted customers of Samuel's Sweet Shop when Gutner passed away from a heart attack.

The store's manager, John Traver—who began working for Gutner when he was 15—feared the store would close as he didn't have the means to take it on himself. That's when Burton approached him. "She came over to me and she said 'Whatever you do, don't close the store, keep it open. We're going to help you,'" Traver told The Poughkeepsie Journal. "I still get the chills talking about it. They told me they'd help and they would check in periodically to see how I was doing and they told me they were working on it. But a lot of time passed between April and December and there were a lot of sleepless nights where it was like, 'What's going to happen? Are they going to help me? Is this place going to close? Should I just try to bootstrap this thing? Should I look for other help? You know, running the tape over and over again."

Finally, in December 2014, the Morgans, the Rudds, Ostroy and Jonas purchased Samuel's and made Traver a partner. "It was incredible," Traver said. "It was such a beautiful marriage of a person who knew how to operate the store, who has a long-time connection to the community, and these special people who are passionate about this, taking an interest." Speaking of the decision to purchase the store, Julie Rudd revealed that everyone was determined to keep Samuel's open. "When Ira passed away, like everyone else in town, we thought, what's going to happen to Samuel's?" she said. "We don't want to lose Samuel's. When the idea came that maybe we should try to save it and keep it going, it wasn't so much about the candy, it was about, this is a meeting place in the community and a place that brings joy to the community and kids love to come and we just really want to keep that going."

"The added bonus that we all found out is, oh, it’s really fun to own a candy store," Julie added. The new co-owners are very hands-on with the beloved store. While Burton helped install the floors inside Samuel's, Morgan hauled equipment and Julie co-created the store’s logo with Rhinebeck graphic artist Cricket Lengyel, you can sometimes find "Ant-Man" star Rudd talking with customers and serving coffee from behind the register. "It is impossible to walk into a candy store and stay in a bad mood. This is what I say. Unless you maybe stub your toe on the gumball machine," he said.

"One of the most important things any human can experience is to be a part of a community and feel connected to where you live and to other people who live there, especially in a job like mine," Rudd shared. "I'm in lots of different locations meeting lots of different people. At times, you can feel you're untethered a little bit. So to have this place, to come in and just serve coffee for a while and hang out at the store and hand out candies... to feel a part of the community makes us sane. It makes us feel part of something important."